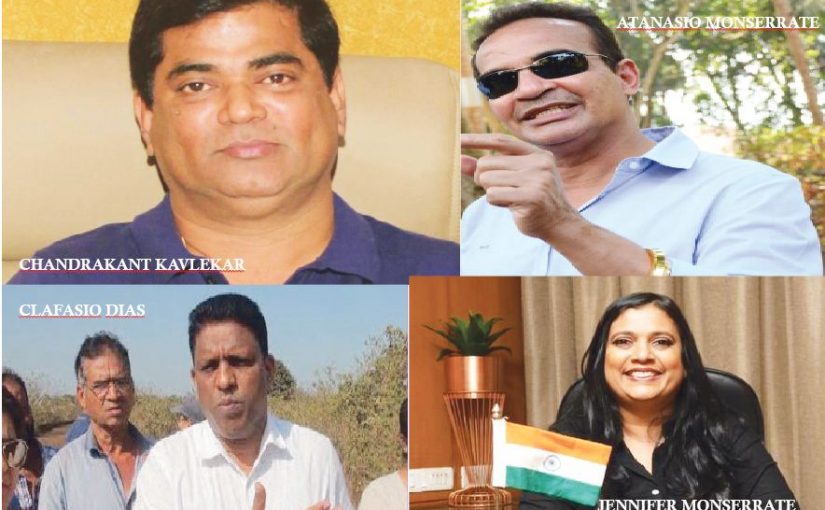 The Supreme Court has further postponed hearing on the disqualification petition filed against ten Congress MLAs and MGP MLAs because Goa speaker, Rajesh Patnekar, is allegedly faking indisposition due to contacting Covid-19! Although GPCC president Girish Chodankar’s counsel made a mention on August 29, 2020 that a date has yet to be fixed for the hearing, the disqualification petition has challenged the claim of the ten Congress MLAs and two MGP MLAs of having merged with the BJP. If they are disqualified they will not only lose their seats but will be barred from contesting Assembly elections for six years….

ON July 10, 2019, ten members of the Congress party led by the deputy leader of the Congress in the Assembly claimed that they had merged with the BJP. The ten MLAs were Canacona MLA Isidore Fernandes, Deputy Chief Minister and Quepem MLA Chandrakant Kavlekar, Water Resources Department Minister and Velim MLA Filipe Neri Rodrigues, Revenue Minister and Taleigao MLA Jennifer Monserratte, Panaji MLA Atanasio Monserratte, Cuncolim MLA Clafasio Dias, Nuvem MLA Wilfred D’Sa and Thivim MLA Nilkant Halarnkar formally met speaker Rajesh Patnekar of the BJP and claimed that they had voluntarily quit the Congress party. Significantly, two members of the BJP, Babu Azgaonkar and Dipak Pauskar, also joined the BJP — leaving Sudhin Dhavalikar as the only member of the MGP in the State.
President of the Goa Pradesh Congress Committee Girish Chodankar filed a petition against the ten congress MLAs before the speaker of the Legislative Assembly for disqualification. MGP leader Sudhin Dhavalikar also filed a petition questioning the claim that two of the three elected MLAs of the MGP had merged with the BJP. However, with the alleged merger of the ten Congress MLAs with the BJP, the strength of the Congress declined from 15 to five. With the simultaneous merger of the two MGP MLAs the strength of the BJP in the Legislative Assembly went up to 27. This mergers were necessary for the survival of the BJP, as after the death of the late Chief Minister Manohar Parrikar, the three members of the Goa Forward party led by Vijai Sardesai and two members of MGP group withdrew support to the BJP.
It may be recalled that the BJP which had secured only 13 seats in the 2017 LA elections ingloriously snatched victory from the jaws of defeat by inducing Goa Forward, MGP and Independents to secure the numbers required to install Manohar Parrikar as chief minister of Goa. This happened primarily because the Congress which had gone 17 seats and which had an understanding with the Goa Forward could not decide on who should be the chief minister! Vijai Sardesai insistence that Digambar Kamat should be chief minister was sabotaged by then GPCC president Luizinho Falerio in collusion with the High Command observer Digvijay Singh.

WHEN the late Manohar Parrikar died on March 18, 2019 the BJP High Command appointed Pramod Sawant as the chief minister. This was not acceptable to either Vijai Sardesai or Sudhin Dhavalikar. They withdrew support to Pramod Sawant along with some of the Independents supporting the BJP. Pramod Sawant reacted by sacking Vijai Sardesai and the Goa Forward MLAs as well as Sudhin Dhavalikar.
However to retain power BJP’s organising secretary Satish Dhond managed to persuade the aforesaid ten members of the Congress led by Chandrakant Kavelekar to defect and join the BJP along with two members of the MGP. MGP MLA Babu Azjgoankar defected because he was happy with his post as minister of tourism. Pramod Sawant also dropped Rohan Khaunte from the Cabinet and transferred most of his portfolios to Jennifer Monserrate who was amongst the ten defecting Congress MLAs joining the new BJP. The current rumour making the rounds is that Babush Monserrate may soon be appointed as Home Minister of the State.
Under the disqualification rules however members of a Legislative party cannot defect to any other party on whose ticket they have not been elected to power. In simple words, since the ten defectors from the Congress and of the two of MGP who had been elected to the Legislative Assembly on Congress and MGP tickets respectively they could not and should not have been authorised to join the BJP — as they had not come to power on BJP tickets. Neither in the case of the Congress defectors or the MGP defectors was permission taken from the organisational wing of the respective parties.

THE speaker of the Legislative Assembly is the primary deciding authority on any disqualification petition. The speaker who was elected on the BJP ticket Rajesh Patnekar is duty bound to follow the rules as amended in the Disqualification Act. This Act does not permit the merger of the Legislative wing of a party without the consent of the organisation wing. The defectors are liable to be disqualified and barred from contesting elections for six years. So much so if the defecting Congress and MGP MLAs who claimed to have merged with the BJP are disqualified, they will not only lose their cabinet seats but will also not be able to contest the 2022 Assembly elections, or any Assembly elections held before — if the chief minister dissolves Assembly and goes for fresh elections.
As in the case of other Opposition case where the BJP has hijacked the government by inducing defection, here to Speaker Rajesh Patnekar in the Goa Assembly has kept postponing the decision of the petition moved by CLP leader Digambar Kamat for disqualification of the Congress MLA defectors. In a nutshell GPCC President Girish Chodankar moved the Supreme Court complaining about the deliberate delay by LA Speaker Patnekar in the hearing of the case and a decision taken on the petition.
Even if the speaker upholds the disqualification it can be challenged in the High Court or the SC if it is against the laws of the Prevention of Disqualification Act 1959 (as amended). The SC which was to hear the petition by GPCC president Girish Chodankar has been forced to repeatedly delay the hearing because of Speaker Patnekar’s failure to hear the disqualification petition for one reason or another.
The most absurd part of the continuing political drama going on in the government in Goa is that many Congress defectors have conveniently claimed to be in the throes of Covid-19 infection as an excuse not to attend Assembly sessions seeking a debate on the long pending debate of the disqualification petition. On the eve of a hearing in the SC speaker Rajesh Patnekar first claimed to be down with Covid-19 and subsequently got himself admitted to the Cardiac Unit of the GMC claiming heart problems. The speaker has sought more time to file additional submissions on the reasons of the delay in clearing the disqualification petition. The primary reason of course being Covid-19.
The Congress on its part is facing a major crises at the Centre because it does not seem to be keen on pursuing the matter. It will be recalled that a group of 20 senior Congress leaders have revolted against the Gandhi family demanding that a new leader be elected from outside the family. Girish Chodankar has historically been a dynasty loyalist and worked personally and closely with Rahul Gandhi as secretary of AICC. There are also rumours that in the light of the Congress party chaos, Digambar Kamat himself might defect to the BJP!
Digambar historically has been part of the BJP and even a staunch RSS member before he double-crossed Manohar Parrikar in 2012 to join the Congress party, to be rewarded with chief ministership. The most confused are the Independent MLAs who do not know to whom they should align themselves with. Those who oppose the BJP are concerned about the sossegad approach of the Congress party to the disqualification petition.

COVID-19 is a very convenient excuse for delaying the hearing of the defection petition by the speaker or the speaker making an appearance in the Supreme Court. It is expected that in the coming days more and more of the defectors will claimed to be infected with Covid-19. Since the government controls the Health Ministry it can pressurise the Covid-19 warriors to issue fake Covid-19 positive certificates. Leave alone the High Court even the SC would be reluctant to compel any Covid-19 infected MLA or speaker to hold an Assembly session!
The Congress of course challenges the Covid-19 claims of the speaker and the defectors by demanding that an independent panel be appointed to check the claims of fake Covid-19 claims by the defectors. But since any such committee will probably be comprised by doctors from the All India Institute of Medical Sciences, a government body, they may also be pressurised to confirm claims of the Directorate of Health of Goa.
Due to uncertainty over the future of the Pramod Sawant government the biggest casualty is the management of Covid-19 epidemic in Goa. Goa seems to be making up after a late start with an average of 500 cases a day. The very fact that MLAs and even senior officials like Dr Jose D’sa of the health department have chosen to get themselves admitted in the Manipal hospital rather than the GMC Covid-19 facilities shows in what a pathetic state Covid-19 management is in the State.
Due to the shortage of beds the Health Department is encouraging Covi-19 affected patients to self-isolate, but is it providing any support to such patients who reportedly number over 3,000 now? A section of media, namely Lokmat has blasted the Covid-19 management and asserts that aam aadmi has lost confidence in government facilities. Many patients believe that going to ESI Covid-19 hospital in Margao or the Covid-19 wards in the GMC is as good as a death sentence.
But the alternative of going to a private hospital like Manipal hospital will bankrupt many poor and middle-class Covid-19 infected patients. Under the circumstance, nobody knows when the disqualification petition will come up in the Assembly or heard in the Supreme Court which has to set a clear deadline for disposal of the petition by the speaker.