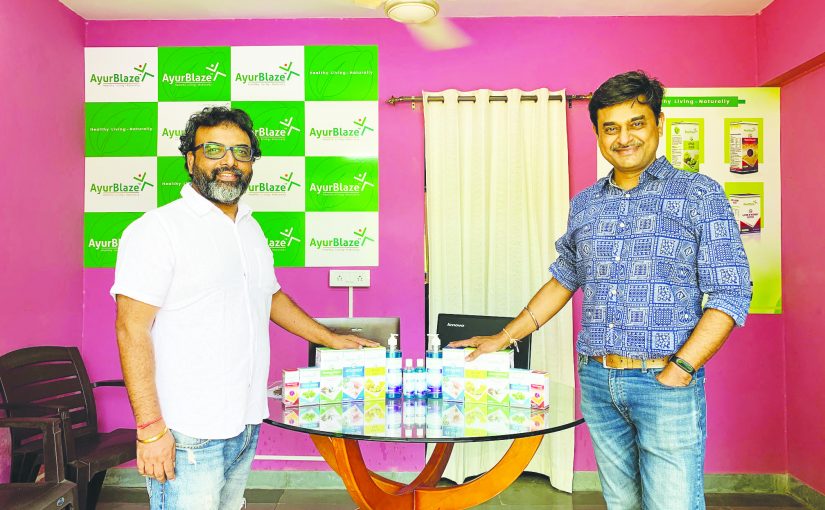 MORE AYURVEDA! Ayurveda products are attracting the many who want to plays safe from the Covid-19 contagion and the latest range comes from new company Ayur Blaze. They have come out with Made in Bharat wellness products, namely Tulsi Drops, Immuniblaze Ras, Ayurmeh Ras, Amla Ras and a product line which includes hand sanitizers to kalonji or nigella seeds extract and a cough syrup. Say Avinash Singh Parmar(left) (founder, Ayur Blaze) and co-founder Kedar Jirage (of Jeevan Rekha Pharmacies in Panaji and Miramar) Ayur Blaze is a “new-age advanced Ayurvedic pharmaceutical company” which seeks to bring chemical-free products as also promote Ayurveda wellness products to society. Needless to say the Covid-19 market is flooded with Ayurveda goodies!

A PROMINENT independent Goan MLA to keep himself in the limelight has been continuously accusing a few ministers/leaders from the current ruling BJP government for allegedly having close links with drug lords/mafia operating from the coastal belts of Goa and also rave-party organisers who were arrested in recent raids at Arpora. They were found in possession with different types of drugs.
Well, these are stale revelations. In fact, the whole world knows that such rave parties/supply/sale of drugs have been going on in Goa for the last so many years with the full backing of our elected politicians (past and present). The allegation is that all this happens very often with the active support of some cops from the Anti-Narcotic Cell.
Under the circumstance how can expect to liberate the small state of Goa from such illegal and destructive activities in Goa? Of course, we may see politicians sometimes instructing the cops to raid a few places temporarily to distract Goans from their own failures, but inwardly will never ever stop such business which more and more are fully dependent on for their own survival and bread, butter, jam, etc.
Forget politicians, today one sees local youngsters peddling drugs in the villages of Goa because this deadly narcotics trade is somehow helping them too, to make some quick bucks in the State. It is something really disturbing if not shocking. Now the drugs trade is interconnected with tourism and has turned into profitable industry not just for our politicians but also local youth.
As long as the business is fully backed by our own elected representatives it will continue to flourish on an ever larger scale and Goa will continue to remain a safe haven for drug peddlers. God alone can save Goa!.
— Jerry Fernandes, Saligao

SAD PUBLIC!
THE gruesome murder of young Margao businessman Swapnil Walke is a matter of great concern. That it happened in broad daylight at a very busy locality is further disturbing. While the young man put up a solo brave fight with his attackers, it is very sad that members of the public stood and watched it all happening. The killers of Walke must be speedily brought to justice.
Do we need any more evidence that there is a total breakdown of law and order in Goa? With increasing murders, rapes and burglaries, there is an urgent need for drastic corrective measures. Otherwise Goa will degenerate into another lawless Bihar and Uttar Pradesh! Our once golden Goa is turning into a narcotics and flesh paradise for criminals with political blessings…Goa’s rising crime graph is worrisome and the situation can only worsen as long as the political-criminal nexus is maintained despite a hue and cry every now and again.
The Supreme Court has time and again reiterated the State to cleanse the political spectrum of criminally-tainted persons but there have been no desired results so far. Our political leaders as law makers should lead by example and be role models but even in small Goa we have ministers and MLAs who are history sheeters with various cases of rape and corruption pending against them.
Crime must never pay and nobody must be above the law. Justice must be done and be seen to be done to protect vulnerable citizens. May the soul of Swapnil Walke rest in peace and his grieving family the strength to brace their so needless loss.
— Aires Rodrigues, Ribandar

MIT-COVID-19 PROJECTIONS
The Massachusetts Institute of Technology research and calculations have projected, that if no cure or no vaccine is found until mid-2021, then positive cases in India will reach 1,93,000 (one lakh ninety three thousand) by March to May 2021. If you extrapolate these findings up to now it may be considered that since India has 80,000 cases every day that test positive that according to the MIT projections, in five months time, this figure will double and hence by January 2021, cases in India will increase to 1,60,000 which means that the MIT research have predicted right and thus it should be the endeavour of the Indian government to take it seriously. India has already seen 66,333 fatalities so far. In Goa too, the positive cases so far has reached 18,000 with 194 fatalities. It would be pertinent to note that the first fatality occurred on 22 June and since then there has been an average of 4.8 deaths per day. Considering this trend, it would be prudent to exercise extreme caution until a cure or a vaccine is found. Earlier, the World Health Organization (WHO) had predicted that cases in India wiould peak in the end of July, which have begun to in fact sustain and is increasing. Maximum preventive measures have to be exercised, because corona virus is a deadly virus.
— Elvidio Miranda, Panaji

WHO DG WRITES TO GOA!
The government believes it is the Avengers combined in one! Doctors too learned as late as in August how cunning the coronavirus is. WHO offered every possible bit of information as it came into public domain. They even offered training modules wherein they spoke of life saving necessities like high flow oxygen. Goa Health Minister Vishwajit Rane is complaining that oxygen suppliers in Goa have no met the required capacity!
Does he know that there are small oxygen generators which do not just produce high flow-60l/min compared to the normal 16 L/m therapy flow? Further, at such high flows, the oxygen is cold and not comfortable: The generators not only heat the oxygen but also increase humidity to remove phlegm. Standard manufacturers of such generators used to produce only 16l/m. WHO worked with all manufacturers who wished to change to high flow. Did anyone from India avail this?
WHO DG at the media briefing of August 31 31/8 (how come media did not report this media briefing?) remarked: WHO fully supports efforts to re-open economies and societies. It wants to see children returning to school and people to their workplaces – but it should happen with safety first rules and regulations.
No country can just pretend the pandemic is over! The reality is that this coronavirus spreads easily and proves to be fatal to people of all ages, while most people remain susceptible. If countries are serious about opening up, they must be serious about suppressing transmission and saving lives
Opening up without having control is a recipe for disaster. It’s not one size fits all, it’s not all or nothing. In many countries we have seen explosive outbreaks linked to gatherings of people at stadiums, nightclubs, places of worship and in other crowds. Decisions about how and when to allow gatherings of people must be taken with a risk-based approach in local contexts.
Countries or communities experiencing significant community transmission may need to postpone events for a short time to reduce transmission. I urge all the doctors who are empanelled to control the pandemic, read WHO briefings and advice the government of Goa. It cannot shy away from responsibility.
— R Fernandes, Margao