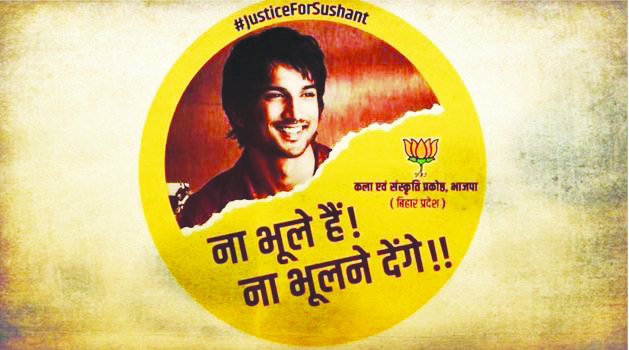 EXPLOITATION: BJP and Bihar politicians will forget Sushant Singh Rajput no sooner the Bihar Assembly elections are over

It is the imminent Assembly elections in Bihar that has raised the decibels over the alleged suicide of Sushant Singh Rajput. The Rajput community of Bihar is also adding to the sound and fury, seeking justice for the popular people’s actor …..

While Nitish Kumar’s party has brought up the name only now, the BJP’s bid to keep Rajput’s name in the public eye began in earnest almost immediately after the actor died.
As was widely anticipated, parties in the National Democratic Alliance coalition in Bihar have incorporated the death of Sushant Singh Rajput in their campaigns for the forthcoming assembly elections in the state.
No less than state chief minister Nitish Kumar, who also heads the Janata Dal (United), raked up his name in a virtual political rally. His coalition partner, the Bharatiya Janata Party, was off to a quicker start, and had incorporated Singh’s images in their campaign propaganda.
Rajput’s untimely death had shocked millions of his fans, not only in Bihar but also elsewhere, the chief minister said, adding that the ongoing Central Bureau of Investigation probe should be able bring out the truth and ensure justice.
“His father lodged an FIR in Patna when he found that an appropriate investigation was not taking place (in Mumbai),” said Kumar, taking a dig at the Shiv Sena-NCP-Congress government in Maharashtra. “Finally, when the bereaved father sought a CBI inquiry, we wasted no time in recommending it and the Centre, thankfully, gave its assent in good time. Now, we can hope that justice will be done in the matter,” said the chief minister, who is seeking his fourth consecutive term in office.
The BJP’s arts and culture wing on Saturday released masks and stickers bearing photographs of the late actor along with the hashtag ‘Justice for Sushant Singh Rajput’ and a new emotive slogan in Hindi: “Na bhule hai, na bhulne denge (Neither have we forgotten, nor will we let it be forgotten).” Over 25,000 such stickers and 30,000 masks will be distributed among the public. According to the convener of the cell, Varun Kumar Singh, the distribution of these masks and stickers has been going on for some time but they have only been noticed now.
A video on Sushant’s ‘life and struggles’ has also been produced which will soon be released by the BJP IT Cell on social media.
Varun Kumar Singh says that he has been a part of the campaign demanding justice for Rajput since its inception. He had convinced BJP leaders Ravi Shankar Prasad, deputy chief minister Sushil Kumar Modi and Ram Kripal Yadav to meet the actor’s family. According to Singh, the matter of the actor’s death is not political but emotional for him.
Calling it an expression of sentiment, Bihar BJP spokesperson Nikhil Anand tweeted, “I welcome the move of Bihar BJP’s Arts and Culture Cell to commemorate Sushant Singh through a variety of programs. We have our own way of expressing the sentiments towards Sushant. To give it a political colour is absolutely wrong.”

While Nitish Kumar’s party has brought up the name only now, the BJP’s bid to keep Rajput’s name in the public eye began in earnest almost immediately after the actor died. Pro-BJP social media pages and influencers joined in and emotionally charged videos of the actor were circulated on social media every other day. The campaign was then gradually linked to Bihari pride.
After Sushant’s father, K.K. Singh, lodged a First Information Report (FIR) at a police station in Patna, the director general of police Gupteshwar Pandey despatched a team to Mumbai instead of following the procedure and handing over the case to the Mumbai police. A tussle between the police forces of the two states ensued, in view of which the Bihar government demanded a CBI probe in the matter. The Centre swiftly approved the transfer of the case to the CBI without considering the merits of the case.
The CBI is currently investigating Sushant’s death while the Enforcement Directorate is probing the money-laundering angle. Recently, the National Narcotics Control Bureau was also roped in for a drugs probe in connection with the actor’s death. All three investigation agencies are controlled by the Centre. With the BJP ruling both the Centre and the state the question is – who is the Bihar BJP seeking justice from by trending the hashtag “Justice for Sushant Singh Rajput”.
The BJP believes that there is a wave of sympathy for Sushant Singh Rajput in Bihar and by handing over the investigation to the CBI, the voters can be made to think that ‘justice will be done’ and can be influenced.
But why is the BJP which has ruled the state for 15 years in the past so keen on using this particular card in the elections? According to political analyst D.M. Diwakar, “It is actually a well-thought out strategy of the BJP due to which they are harping on the issue. Emotional matters have always benefited the BJP. Right now, the government is in the dock over its handling of the coronavirus pandemic situation. The country’s GDP is in the negative figures. The migrant labourers who returned to Bihar cannot find work. Unemployment is at an all-time high. Half of Bihar is reeling under severe floods. But the government has no answer to these problems. That is why it is hankering on the issue of Sushant’s death. By doing so, the BJP wants to send across the message to its voters in Bihar that they are the saviours of ‘Bihari pride’.”
The way the BJP has appropriated the actor’s suicide for political gains, it is evident that the top BJP leadership is going to bring up the matter in their speeches in the run up to the elections. It poses a twofold challenge before the opposition parties. Firstly, they need to get the public shift its focus from Sushant to issues of unemployment, poverty, flood and the government’s poor management of the pandemic. Secondly, they must force the BJP to stop obsessing over Sushant Rajput’s death.

What will be the opposition’s stance?

Had the opposition taken a lead on the issue of the actor’s suicide, it would have put the BJP on the back foot by now, experts believe. Although it was clear that the BJP-JD(U) combine was tactically raking up the film star’s death as a possible instrument to steer the election towards an emotional issue, most opposition parties remained unclear about how to respond to it. By not taking a principled stand, it is believed, the opposition readily ceded political space to Nitish Kumar on this matter.
As a result, opposition leaders were not seen either in support or in opposition to the way his death was dealt with. Soon after he died, Tejashwi Yadav was one of the first political leaders to meet Sushant’s family and assured them of justice. But ever since the CBI was handed the investigation, the opposition has given up the matter.
A senior leader of the Rashtriya Janata Dal (RJD), Ramchandra Purve told The Wire, “Our leader of opposition, Tejashwi Yadav, had demanded a CBI probe in Sushant’s death in the very beginning. In fact, he even demanded to name the film city in Rajgir, which is still under construction, after Sushant Singh Rajput. We have all our sympathies and condolences with Sushant Singh’s family. We also respect the sentiments of the people of Bihar but we want to focus on the issues of unemployment, poverty, flood and the mismanagement of government during the pandemic. CM Nitish Kumar has been completely exposed on the issue of migrant labourers and finally gave in to Tejashwi Yadav’s demand to let them return to Bihar. We will contest the elections on these issues.”
Senior Congress leader Kokab Qadri has slammed the BJP for politicising the actor’s suicide. Speaking to The Wire, he said, “Sushant Singh Rajput was the pride of Bihar. We deeply sympathise with his family. But the way the BJP is turning it into a political issue, is highly disappointing.”
“Sushant’s death is now being investigated by the CBI. In such a situation, the process of justice will be hindered if the BJP politicises the issue. The truth of the matter is that the BJP wants to divert attention from burning issues like unemployment, poverty, coronavirus pandemic and others. That’s why they are raking up the issue of Sushant Rajput’s death. But we will strongly raise the issues like unemployment and poverty,” said Qadri.
The leaders of both the opposition parties have agreed that it is wrong to give the actor’s death a political colour. Therefore, they have gone silent on the issue after the investigation was handed to the CBI.
Kokab Qadri does not think that BJP will be able to woo the voters on the issue. “The public is no longer so naïve to vote on emotional issues. They can see that there are no jobs. They are traumatised because of the coronavirus. They will not be swayed by the BJP,” he says.
D.M. Diwakar too believes that raising crucial issues like unemployment, poverty and floods by the opposition parties, especially by Tejahswi Yadav, is the right step.
“It is good that Tejashwi is raising pressing issues,” he says. “But the efforts currently being made are insufficient. The opposition needs to raise the issues more emphatically and spread awareness among the public. If they stress on these issues, it will definitely benefit them.”
Eyeing the Rajput vote bank
Five percent voters in Bihar belong to the Rajput community. Additionally, in many pockets, they exercise disproportionate influence over the electorate. There is some resentment towards the BJP among the upper castes in the state. This is why the BJP is constantly alluding to RJD’s 15-year tenure under Lalu Prasad Yadav as ‘jungle raj’ to polarise the upper castes.
One of the reasons why Sushant Singh has been made the poster boy for the poll campaign by the BJP is to appease Rajput voters. Second, it is not only the Rajput community associating the Sushant case with Bihari pride. In fact, there could be an emotional wave among other communities of Bihar about demanding justice for the late actor. The BJP is hopeful of luring not only the Rajput voters but other communities as well.