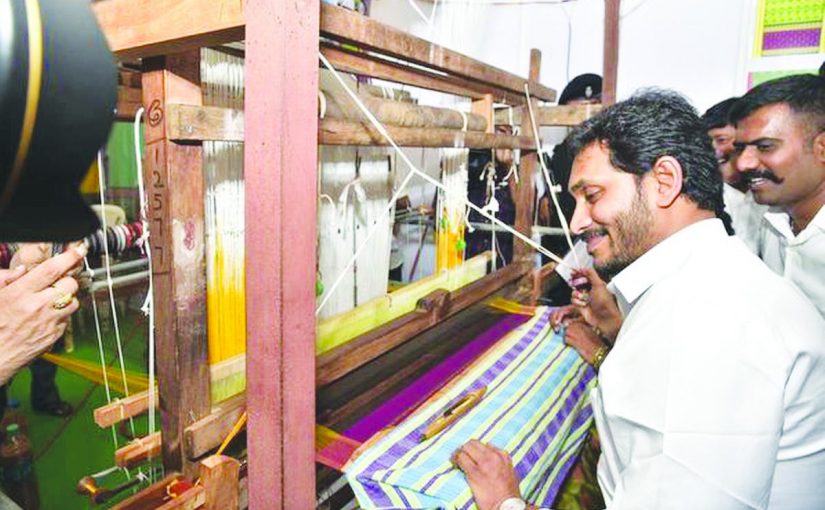 JOBLESS: The handloom industry in which skilled workers turn out desirable fabrics like lungi and hand-woven Banarasi sarees, have been rendered joblessly because of Covid-19

Though traders are the main supporters of the ruling BJP party both at the Centre and the State, the physical distance zone has virtually destroy the business community in the country……

Businesses across India are slowly beginning to feel the pinch of the COVID-19 pandemic. Last month, the Traders’ body Confederation of All India Traders (CAIT) had written to India’s trade minister Piyush Goyal, asking him to assess the impact of coronavirus, particularly on small traders and businesses in the country.
For a state bruised by the long-term effects of GST, demonetisation and back-to-back floods, the economic impact of the ongoing COVID-19 pandemic on Kerala is likely to be huge. The state’s finances are already in bad shape. As a result of the partial lockdown in the state and the public being advised to practice social distancing measures, traders are staring at an unpredictable future.
In the financial hub of Kochi, malls, hotels, restaurants, business establishments, small and large shops have taken a big hit. Cinema theatres and multiplexes have been ordered to down shutters till March 31. Drivers with internet cab aggregators have also reported reduced passenger demand. As many companies have enforced work-from-home policies for their employees, there are fewer private vehicles on the roads.
P C Jacob, Ernakulam district president of the influential traders’ collective Kerala Vyapari Vyavasayi Ekopana Samithi (KVVES), said an unprecedented crisis looms large for the trading and business communities in the state. “The trading scene is lifeless. Small-time shopkeepers have taken the biggest hit. People are not stepping out of their homes and they have reduced their consumption capacity. What will the shopkeepers do? How will they pay their bank loans and rent? How will labourer salaries be met?” According to Jacob, neither the state government nor the Centre have announced any special packages for small business owners.
Liquor sales are an important source of revenue in Kerala, and the state government has resisted closing bars and retail outlets, despite risks of community transmission of coronavirus. On Wednesday, the cabinet decided that bars and pubs will remain open in the state, albeit with precautionary measures.
Contrary to how the COVID-19 outbreak has contributed to a dip in sales for most business-to-consumer establishments in the country, in Bangalore, some business-to-business establishments have seen an unprecedented demand for staples. For instance, METRO Cash & Carry India, a wholesaler which caters to traders, hotels, restaurants, caterers, offices, and institutions, has witnessed a surge in the sales of essential commodities such as rice, flour, vegetables, fruits and dal.
“Our team is proactively monitoring and educating our business customers that we are maintaining health and hygiene as advised by Bengaluru’s local civic body (BBMP) and hence there is no need for panic-buying as the store will remain open and will continue to offer food and groceries,” a METRO Cash & Carry India spokesperson told indianexpress.com. The company also said it was taking necessary precautions and preventive actions for the well-being of customers and employees at the store.
In Chennai, Ritchie Street, the electronic grey market hub which hosts more than 2,500 shops barring roadside vendors, has been facing an unprecedented crisis amid the outbreak of coronavirus. Shopkeepers complained that goods are lying in godowns and they are unaware of when the situation will return to normalcy.
The market which depends heavily on the import of products like TVs, laptops, mobile phones, gaming consoles, air conditioners, refrigerators, and IT hardware products from China and South Korea has been severely hit due to the coronavirus epidemic. There has been a drop in demand too since the state has gone under lockdown, with customers staying home and prioritising stocking up on essentials like groceries over traveling.
“Since flights are canceled, the new shipments have not reached the market. The local dealers have started stocking the goods but customers are not turning up to buy (them). The footfall has drastically reduced,” said Sunil Handa, the chairman of Ritchie Street Market Association. “But whatever the customer is doing is the right thing to do at this stage. Safety comes first, you can buy the product whenever you wish.”
Handa said local manufacturing which depends on Chinese spare parts for assembling these goods have been the worst affected. “If you take an LED TV, the panel comes from China, (and) the rest of the parts are assembled here. So without the main parts which are imported from other countries, the manufacturers cannot sell a finished product to the dealers,” explained Handa. “About 50 per cent of goods in the market are imported from China. We are waiting for the Indian manufacturers to develop similar products that we import from other countries. We would love to buy from Indian manufacturers provided the product is of superior quality.”
On March 15, Tamil Nadu Chief Minister Edapaddi K Palanisamy had ordered the closure of all commercial establishments until the end of the month to prevent the spread of COVID-19. With textile showrooms and other big commercial establishments in the city shut, employees have been caught in a dilemma regarding whether to go back to their hometowns or to stay in the city.

“My company told me they are going to shut down the shelters for the next 15 days. There are lakhs of employees on Ranganathan Street like me who don’t know what to do, how to feed their families,” said a worker of a popular textile showroom in the city that provides employees accommodation near the shops. “If it is a day or two it is fine. But how can we survive if our source of income is stopped for more than 10 days?”
Even before West Bengal recorded its first COVID-19 positive case yesterday, footfall in malls and other public places in Kolkata had drastically reduced over the past few weeks. Although local markets are at present open, buyers are few. This past week, the West Bengal government ordered the closure of schools, universities, cinema halls and auditoriums till March 31 to prevent gatherings of large crowds. “Regardless of what the government says, shops will remain open and prices will not change. Is whatever the government says right?” asked Shishir, a fruit-seller in Jadubabur Bazar in Bhawanipur, one of the largest local markets in Kolkata.
Curbs on the import of foreign fruits and flowers have impacted the stocks of local traders in Kolkata. “The government closed the imports of fruits from abroad one week ago and they have been stopped till March 30,” said Dilip Singh, a manager at Gokul Vatika, one the biggest shops that trade in the import and distribution of fruits from overseas. Once existing stocks run out, Singh said traders will be unable to access produce from markets in Bangkok, from where the fruits are sourced. This, however, could not be independently corroborated.
Florists in New Market, one of Kolkata’s oldest marketplaces, are planning on substituting imported flowers with locally available varieties and are holding on to imported stock for as long as they last. For now, flower traders in Kolkata still have access to flower suppliers in Bangalore, while those in Maharashtra, one of the states with the highest rates of COVID-19 infections, have shut shop. “Prices will not change and we will continue operating our business,” said Deependu, a florist in New Market, in an interview with indianexpress.com.
In Tripura, consumers are wary of buying meat, eggs and even fish in some cases. Despite WHO advisories and attempts by the state government to dismiss content on social media that claim meat and eggs carry the COVID-19 strain, demands for these foods have come down to nearly a fifth.
“Our business has gone bad. People don’t want to buy meat anymore. We are now selling 20-25 chickens in an entire day, contrary to our usual sales of 80-100 pieces, and that too at less than half the price,” said Akash Das, 27, who runs a small broiler chicken meat shop at Maharajganj Bazaar in Agartala, the largest market in the state of Tripura.
COVID-19 fears have impacted sales of other meats as well at this Agartala bazaar. Duck dealer Tapan Banik said sales of duck have severely dropped due to the rise in temperatures and fears of coronavirus infections. “We are not selling more than 8-10 ducks a day. The temperature is rising and people tend not to consume ducks during this season. Besides, the coronavirus scare seems to have put off customers completely,” said Banik.
Dr Dilip Kumar Chakma, Director of Tripura’s Animal Rearing Development Department (ARDD), said his department has been trying to sensitise people using advertisements, audio-visual awareness campaigns, public announcements and notifications, but misinformation on social media has contributed to widespread confusion and misplaced fears. “The government has already clarified several times that poultry birds like chicken, duck and their eggs don’t spread coronavirus. This disease is spread from person to person. Proper hygiene and sanitation should be followed to prevent it. Chicken or eggs have nothing to do with it. We are sensitising people every day through different ways,” the official said.
However, people in Tripura don’t seem to be convinced. “I have a young child. I don’t know if the government is right or not. I just don’t want to take a risk. I shall avoid eating meat or eggs for a few weeks if necessary,” said Sharmistha Das, a resident of Bardowali area in Agartala city. Another resident, Sushanta Dey, said he had heard big fish were harmful and might spread coronavirus. “So, we are only buying small fish or vegetables for the time being.”
On any other day, the chicken shop in Guwahati’s busy Ulubari poultry and fish market has customers elbowing each other, clamouring to be served first. But today, in the post-Coronavirus world, owner Raju Ali, whiles away hours. “Not a single customer has come to buy chicken today,” he said.
As cases of COVID-19 rise in India, a perception among the public that the virus can be contracted from poultry has led to a drastic dip in sales, even in a state like Assam, where no positive case of the virus has been reported yet. “I used to sell 100-120 kg of broiler chicken per day — now that has gone down to 20 kg,” he said.
“Broiler chicken is anyway considered unhealthy. On top of that, people now think it comes with a virus.” As a result, across the city, the price of broiler chicken has come down. “Earlier wholesalers would sell it at 100, now they sell it for45,” said Mohammed Salimuddin Ahmed, another chicken shop owner.
While local fish sales have not reduced, imported fish (salaani maas) has taken a hit. “This is because fish traders from Delhi, Andhra Pradesh etc have stopped sending fish. The loading depots are shut till March 31. Trains have stopped bringing in fish from Delhi. Weddings and parties are being called off, so caterers are losing out. It is like the whole economy is down,” said Pankaj Deka, a trader and a member of the All Guwahati Fish Wholesale Association. The Guwahati Municipal Corporation is carrying out drives against unhygienic fish and meat markets in the city, especially roadside vendors.