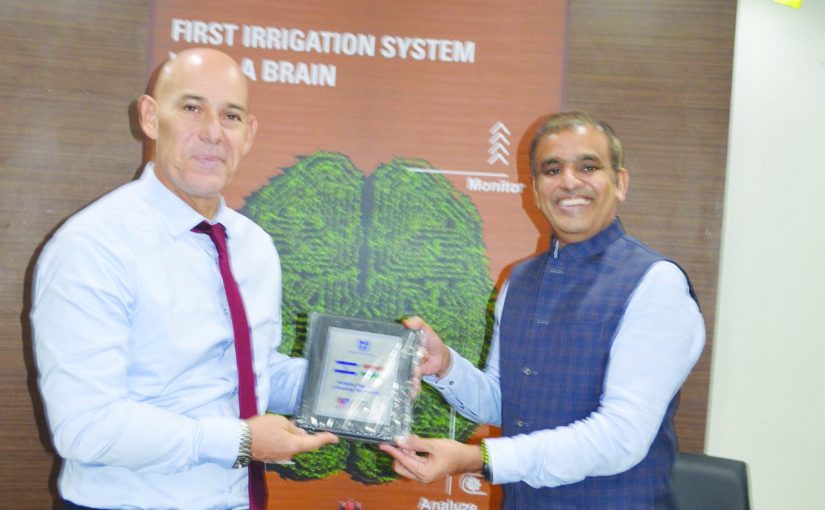 AGRICULTURE IS IN NEWS!

BOOSTING AGRICULTURE: The new Ambassador of Israel to India, Dr Ron Malka, discussed the latest agri-tech innovations with Randhir Chauhan, Managing Director, Netafim India during his recent visit to the company’s manufacturing facility at Savli, Vadodara, Gujarat, to strengthen the Indo-Israel bilateral relationships in the modernization of agriculture in the country.

FORMER Reserve Bank of India (RBI) Governor Raghuram Rajan has indicated that some of the public sector banks (PSBs) should be privatized. It is known beyond doubt that private banks are performing far better than the PSBs. The profitability of the private banks are much higher and NPAs have been well under control amongst the private banks.
It may be emphasized here that the associate banks of India’s largest state lender was having very healthy earnings per share (EPS) before the merger of the associate banks with the main state lender. It should be also emphasized that the PSB of the newly carved union territory was also having a very high degree of EPS. In recent times, when the interest rates of fixed deposits is very low, the interest rates on loans are very low comparatively and therefore recovery of loans and therefore reduction of NPAs should have been easier. The private banks have been able to curb NPAs to a large extent and to run very healthy balance sheets. It is thus prudent that the most of the PSBs should be privatized to professionalize banking in the country.
—Elvidio Miranda, Panaji

Shame on the central BJP government
The central government has passed a bill to amend the Foreign Contribution Regulation Act (FCRA) in the Rajya Sabha with the sole intention of targeting all minority run NGOs and in the name of transparency or restricting their use of foreign funding in our country. Well, this is really very sad because today many Indian hospitals and schools/colleges are solely run by minority run NGOs funded by foreign donations where EWS class is mainly benefited. But with this latest unfortunate decision it now looks like free education and care which were given to poor families will be severely effected as there will be no other way to help them out in the near future.
It should be noted that the central BJP government had passed a bill in 2016 allowing foreign funding of all political parties and that too retroactively even.
Unfortunately, the message which the leaders of the same government wants to give today after passing the latest amendment FCRA bill is that if any foreign funding is given to NGOs for social welfare, environmental causes then it is bad but if any foreign funding is given to their own party fund to fight elections or for their IT cell to spread the communal virus to divide Indians on caste/religious lines through the electronic media then it is absolutely good and fine.
Looks like the final message which the Central BJP leaders somehow wants to convey everyone is that one can continue giving huge funds only for political parties but not for social welfare activities of NGOs as they alone have a first birth right to be the beneficiaries of foreign funding of over 90% funds remitted from abroad and not others.
I therefore strongly believe that the whole idea of the Central BJP leaders is finally to turn black money into white by thinking only about their own “Vikaas” (development) targeting all minority run NGOs through such bills and indulging in such open double standards in our country. Shame on the central BJP government…..
—Jerry Fernandes, Saligao

LEAVE IT TO THE EXPERTS!
THE experts say Covid-19 comes from Wuhan. They got a taste of the pandemic first and overcame it. WHO empanelled expert scientists from across the world to be in touch with China and other experts across countries. The data gathered has been researched and guidelines issued to be followed in cases the dreaded coronavirus infection.
In his media address dated August 31 DG of WHO voiced world concerns. We want to see children returning to school, people returning to their workplaces – but we want to see it done safely! If countries are serious about opening up, they must be serious about suppressing transmission and saving life.
The more control countries have over the virus the more they may open up to normal living. But opening up without this kind of control which is there in some countries like Germany and New Zealand is a recipe for disaster. It’s not one size fits all, it’s not all or nothing.
Do we re-start schools just because students want to meet up with classmates? Are our cases going down? Is this a reason? We can innovate. With online classes, students miss out on crucial vitamin D. After the first class at 8.15am there must be a 15 minute break for students for recreation in the outdoors. Or we’ll end up rickety children.
India’s claim is that it has the second highest rate of cured patients. WHO has a software to track patients. Many of the cured patients still have to avail of oxygen facility after being declared cured. Another study conducted by the Chongxing Shen and others published in the ‘International Journal of Infectious Diseases’ — https://www.ijidonline.com/article/S1201-9712(20)30515-4/pdf — put forward Nocturnal Oxygen Therapy as an option for early Covid 19 presentation. The GMC dean now admits their failure in the case of some comorbidities patients and have come out with some “pouch” used in UP! How does it save comorbid patients who contract the infection?
WHO is the expert but we like to believe we Indians are the smartest!
—R Fernandes, Margao

GOA’S POLITICAL TURF?
THE corrupt and criminal-minded need to be uprooted from the political spectrum for there to be a ray of hope for India’s polity! The Supreme Court had rightly observed that in the interest of the nation criminal cases involving politicians must be speedily disposed.
While expressing the need for decriminalization of politics, the court has exhorted the necessity to create special fast track courts to deal with cases against politicians. While the SC wants the trial of such cases completed within a year, in Goa we have very serious criminal cases lingering for years against some current politicians, in many cases the trial has yet to commence. lingering for years, where in many cases the trial is yet to commence.
The SC has set three months as the outer limit for Speaker of Legislative Assemblies to conclude disqualification proceedings; however, the disqualification petitions against 12 Goa MLAs has dragged on merrily to make a mockery of the law.
Goa may be India’s smallest state but with the never ending political circus it has become a laboratory for every possible political experiment and has been in the news for all the wrong reasons. We have shown the nation the ways and means to circumvent the Anti-Defection law, with political prostitution and party turncoats at its very hilt.
Lust for power and greed of the rupee arrogantly drives our politicians into clinging on to the powers of trappings of office in defiance of the law or wishes of their paymasters, the hard working citizens. There is no hope whatsoever that the situation will ever improve as it is only further deteriorating and rapidly decaying by the day. The unacceptable antics and behavior of some of our politicians in recent times has turned politics into a much despised profession, looked upon with disdain and held in low esteem, by the very people that they are meant to serve.
It is a travesty of justice that lawmakers should be lawbreakers who corruptly try every trick in the book to avoid or delay being subject to the urgent full force of the law, unlike the common man! The political elite must lead by example and act as role models for citizens, otherwise trust and faith in our legal justice system is rapidly eroded – where one law applies to the privileged while the real law applies to the many.
Our politicians would do well to pay heed to the advice of John Wooden, a famous basketball player, who said “Be more concerned with your character than your reputation, because your character is what you really are, while your reputation is merely what others think you are!
No one is above the law. Not even a politician, a criminal or a police officer. We are all accountable for our actions.
—Aires Rodrigues, Ribandar