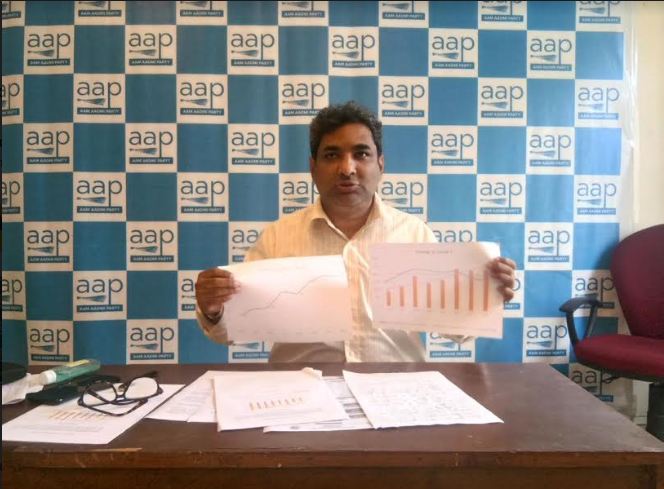 AAM Aadmi party new AAP interim convener Rahul Mhambre in a scathing review points out that Health Minister Vishwajit Rane is making fake promises and this he should stop doing! From beds to increasing testing to providing oximeter kits, he says, it’s all talk and no action.
Speaking to media people Mr Mhambre said over the past few weeks Goa has seen a rapid increase in number of Covid-19 cases without any increase in number of testing. A week to week trend studied by the AAP workers from July 26 to till Sept 19 clearly shows that the avarage number of testing per day has remained the same while average number of Covid positive cases per day increased by 2.5 times! Which means positivity rate has increased rapidly.
He said, “Within the span of eight weeks the active cases have risen more than three times from 1,652 to 5,408. The number of Covid deaths reported last week is almost four times to what was reported end July. From 15 deaths reported end July it is 56 deaths ending September. This is why, he added, the party has been demanding an increase in testing to 5,000 per day so as to trace and isolate patients in a timely manner to stop the spread of the contagion.
Also, “If AAP and common Goans have reached almost 40,000 houses till date under our Goans Against Corona campaign and performed oxygen level check-ups, I want to ask Mr Rane why have you not been able to delivery promised home isolation oximeter kits? Why are you playing with the lives of ordinary Goans? Stop making false promises and start delivering.”
As for the Chief Minister Pramod Sawant who has issued with the party’s proposed 3T model, well then Prime Minister Modi himself has called for increase in testing, “If Modiji can understand this why does CM Sawant have issues with it? Why can’t he ask his Health Minister Rane to increase testing to 5,000?”
Mr Mhambre also noted how the CM played a gimmick by announcing reduction in capped rates for covid treatment in private hospitals, “We are calling it a gimmick because private hospitals are making money by forcing their own regulations, people have posted videos on social media wherein they are imposing a mandatory stay of seven days. Per day cost of room charges are as high as Rs25,000 and they are also forcing patients to submit advance of Rs2 lakh before admission. All this is happening under the nose of the government and no action is taken against this extortion.”
Under Disaster Management Act the government is entitled to take over hotels and private hospitals. Different states have used this approach to plan for infrastructural needs to deal with the covid menace but nothing has been done along similar lines in Goa. What is stopping the government? As we can see GMC is full again , the number of cases has risen from 1,600 to 5,600 in the span of less than two months and Mr Rane should realize the storm is not yet over.
An important point Mr Rahul Mhambre made is that if the government is all that serious about combatting the infection by now it would have linked all coronavirus treatment expenditure to the DDSSY insurance scheme. But it has not done this and nor does anyone think it is useful to publish the availability of hospital beds in daily health bulletins. It is high time the government of Goa started working for Goans!