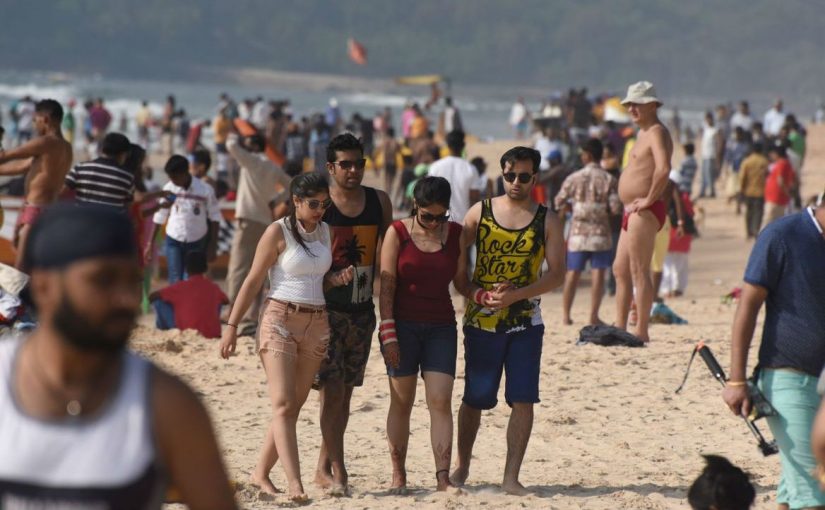 COVID-19 WOES: Many domestic tourist flocked to Goa during the Gandhi Jayanti weekend though in theory there is a ban on serving alcohol on the mahatmas birthday. I practice it is readily available

And a few stray thoughts on the brutal rape of a 19 year old girl in the Harthas district of Uttar Pradesh. This was an action replay of the Nirbhaya case in Delhi. It may be recalled that the medical student was gang raped when she was out with her boyfriend late at the evening. In the Harthas incident also the dalit girl has been accused of going out with an upper caste boy in public. The most horrifying aspect of the Harthas rape is the upper castes justifying the rape which was allegedly instigated by a local BJP MLA. In a massive cover up operation the police are claiming that there was no evidence of rape. While a few minor rank police constables have been arrested the senior officers and the District Magistrate have got away scot free. Instead of the locals supporting the victim and her family, morchas are being organised in favour of the rapist. The UP Chief Minister Yogi Adityanath has defended the rapist claiming that girls attract violence by their un-lady like behaviour. Which is like the dialogues from a Hindi film which equates young attractive unmarried girls as open lockers “khooli tijori.”

Just a day after the brutal rape and murder of the dalit girl there was another similar incident the very next day. Historically it has been believed that Delhi is very unsafe for women. But since the BJP appointed Yogi Aditiyanath as the Chief Minister of UP the number of acts of crimes against women has gone up steeply. There are even being charges of ill-treatment of women in the Swami Aditiyanthas Ashram in Gorakpur. UP has remained among the most backward states in the country. Not surprisingly the majority of the ghar wapasis were from UP and Bihar which have been known as the BIMARU states. The UP CM has accused the congress party of selectively targeting only BJP states. Initially Rahul Gandhi who had just returned from United State where Sonia Gandhi had gone for an annual check-up at Solan Kattering, he rushed to meet her family of the rape victim in Harthas district. Rahul and Priyanka who had accompanied him were not permitted to meet the family. On the contrary there are reports and even images showing the police man handling Rahul Gandhi. Subsequently the younger Gandhi’s managed to meet the family of the victim. Yogi Aditiyanath and other BJP leaders are questioning why Rahul has ignored cases of rape in Rajasthan and other congress rule states.

And a few stray thoughts on the Irrigation Minister Prakash Javadekar refusing to answer question on the diversion of the Mhadei river of Karnataka. This is not the first time that the ruling BJP government has favoured diversion of Mhadei water by Karnataka. Indeed while the late Manohar Parrikar was the chief minister of Goa he had reportedly written a letter to senior BJP leader Yedhurappa that Goa pledged to divert Mhadei only for drinking water. The excuse of Karnataka has been that there is acute water scarcity in Hubli and Dharward. The truth is that Karnataka has been diverting the Mhadei waters to the Malaprabha basin which is the sugarcane belt of Karnataka.

It is well-known that the sugarcane crop consumes a lot of water. It is the sugarcane farmers lobby which has been demanding the diversion of mhadei water to Karnataka. Fortunately for Goa the impact of the diversion has been masked by the very heavy rains that Goa has received in the months of August and September. If Goa had got only normal monsoon or the rains had fallen short there would have been a major crises and the Dudsagar falls would have dried up. The diversion of the Mhadei waters will not only affect the casino industry which is the major source of revenue to the Goa government but also the resumption of mining. Though mining has yet to be renewed due to the on-going cases in the SC and new threat has been immerged. New jetties are coming up for the movement of coal for the major industrial units of the Jindals and the Adanis. There have been mass protest over transportation of coal through the rivers of Goa. Indeed the idea of converting the MPT into a dirty cargo port is the brain child of the transport and water waste minister Nitin Ghadkari. Ghadkari who has been out of action for a while because of Covid-19 infect wanted all the rivers in the country to be nationalised. At present rivers fall in the joint category where the centre cannot undertake projects without the permission of the states. Fortunately for Goa because of the pre-occupation with Covid-19 any decision on nationalisation rivers has been postponed. But Karnataka continues to divert the waters of Mhadei rivers.

And a few stray thoughts on domestic tourists flocking to Goa despite the growing number of Covid-19 cases. During the October 2, weekend marking the birthday of Mahatma Gandhi all the flights from Mumbai and Delhi to Goa were full and most hotels reported very good occupancy. Unfortunately no hotel can achieve full occupancy because of Covid-19 restriction which allow only 50% of the rooms and the tables and restaurants to be used to ensure that physical distance guidelines are observed. Not only ordinary domestic tourist but the bold and the beautiful and the rich and the powerful have also been holidaying in Goa to escape the intensity of Covid-19 in Maharashtra. Mumbai continues to lead the country in the number of Covid-19 cases. Whether it by co-incidence or not Karan Johar was shooting his film in Goa when the SSR suicide took place. The CBI which was entrusted with the case chose to focus more on the drug angle than the suicide itself. The main suppliers of the top quality Ganja which incidentally is called TOP made from the root of the Ganja plant are from Goa. A leading hotelier in Goa Arya was arrested by the narcotics brigade. It is also alleged that the arrested hotelier was the main supplier of drugs at the parties held by top films stars. It was while Deepika Padukone and Karan Johar were in Goa that the Narcotics Bureau issued a warrant against these top filmstars. To add to the misery to the Karan Johar several members of the his production company, Dharma Production were also infected with Covid-19. Deepika Padukone manage to get a day’s reprive from the Narcotic Bureau and went back from Goa to Mumbai in her charter flight.

The Narcotic Bureau exonerated both Deepika Padukone and Karan Johar pointing out that mere reference to ‘maal’ in the whatsApp messages could not be interpreted as a reference to drug. In slang in the maal is used for many things including women. In the underworld women are always reports to as ‘kya maal hai’. After he was given a clean chit by the narcotic bureau Karan Johar insisted he never took drugs and advised youth against taking drug. Unlike Mumbai where beaches were blocked out of fear of spread of Covid-19, the beaches of Goa are free for anyone to enjoy. But the biggest attraction particularly for domestic tourist is the fact that the bars have been opened again and can function till 11 pm at night. Since liquor in Goa is much cheaper than in Maharashtra and Karnataka there is a huge rush of domestic tourist wanting to drawn their Covid-19 worries in liquor. Unfortunately for the tourist re-opening of casinos has been further postponed. While domestic tourist have started coming to Goa in large numbers there have been a delay in charter flights. All this years the first charters used to planned in last week of September. This year the major charter operator in the UK and Russia have decided to postponed charters to the last week of December. This is because of the large number of Covid-19 cases and the lack of infra-structure for treatment of Covid-19 in Goa. Unlike in India the UK Prime Minister Boris Johnson, who himself was a victim of Covid-19 have not allowed the infection to interfere with their pleasures. The bars in the United Kingdom particularly in London are doing very good business despite Covid-19. A lot of hope of the world and India for a vaccine for Covid-19 lies with Cambridge in the United Kingdom. The virology Lab in Cambridge is leading the race for coming out with the affective vaccine against Covid-19 which is already undergoing the third round of human test even in India.

And a last stray thoughts on migration affecting industry and business in Goa. Among the most important businesses in Goa is logistics. This involves transport of goods from one part of Goa to another part as well as interstate transport of goods. The best known packers in the country are the Agarwals who like the Mumbai dabba wala have a monopoly on the business of transporting household articles from Goa to Delhi or within areas in Goa. Since we decided to move our residence from Dempo Bhat to a gated colony in Caranzalem we hired Agarwal as we had done in the past. Their speciality is that they can move delicate items like dressing tables with mirrors, washing machines and even crockery with a total guarantee of no damage. This time however we had major problems as we understand that during the lockdown period the majority of the employees of Agarwal packers went back to UP. We also discovered in the process of moving to gated colony that Covid-19 in Goa is not limited to slum colonies like Camra bhat and the other slums along with the St Inez nala. We were quite surprised that there were many cases of Covid-19 in the Models Millennium complex. To our shock and surprised there were a notice from the Collector just on the eve of us moving to Caranzalem that the residents of the ground floor had got Covid-19. Most middle class residents prefer home isolation to going to either the government Covid-19 facilities or the private hospitals. The most popular private hospitals in Panjim is monopolised by VIPs. There is a desperate shortage of beds compared to the growing number patients. So much so many patients are asked to sleep on stretchers. As in Delhi the government is encouraging mild and moderate cases of Covid-19 to opt for home isolation so that the beds are available for more serious cases. Unlike in other parts in India many of the Covid-19 victims are in their 20s and 30s in Goa with the youngest Covid-19 victim being only 8 months old. More over the most affective medicine against the Covid-19 in Remdesivir is not given to patients in government hospitals as they are very expensive costing more than Rs 3,000 per dose. Ventilators are also in short supply.