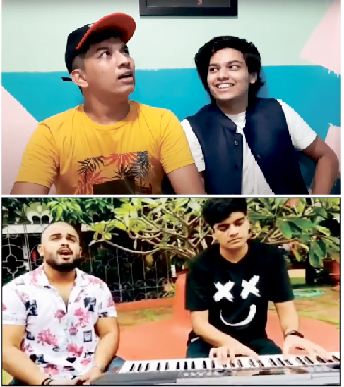 For first-year students it was new normal and a new virtual celebration of Fresher’s Day out at Raia down South Goa at the V M Salgaokar Institute of International Hospitality Education (VIMSIIHE). A variety cultural program was put up which featured musical skits and talks, much more, to make everyone break the ice amongst themselves and share notes. Eshaan Collaco, first year student at VIMSIIHE had this to say, “Our seniors really put in a lot of time and effort to organize this freshers event and we appreciate them for giving us such an insight in their wonderful VMSIIHE journey…” The academic year has already commenced online at this premier hospitality institute of Goa.

A reputed jewellery brand’s ad as part of its ‘Ekatvam’ campaign, celebrating “the coming together of people” was recently withdrawn as it irked some communal BJP/Sangh Parivar sympathisers who claimed it promoted “love jihad” in the country. But celebrities like Richa Chadha and Chetan Bhagat have appreciated the advertisement for conveying a message of communal harmony and the Indian confluence of different traditions and cultures.
Well, the reason why some people of late are seen displaying an allergy or becoming intolerant when it comes to Hindu-Muslim unity or interfaith marriages, it is because political parties like the BJP have successfully managed to aggressively polarise this country over the years on caste/religious lines for political gains.
But the one important question which everyone should ask the leaders of the BJP is that if they are so against interfaith or Muslim-Hindu marriages referred to “love jihad” — then how come they have embraced Muslim leaders like Mukhtar Abbas Naqvi and Syed Shahnawaz Hussain in their own party with open arms, and their wives are Hindu women! And what about their leader Subramanian Swamy who is himself married to a Parsi woman and gone on to marry one of his own daughter to a Muslim?
These hypocritical BJP leaders should instruct all their blind road-side supporters to take out violent protests against their own leaders first for practically supporting/promoting interfaith marriages in their homes, but weirdly creating communal disturbances which don’t make sense outside their home for what kind of political gains?
—Jerry Fernandes, Saligao

PRAY TO OUR LADY OF FATIMA
OCTOBER 13 every year is celebrated with solemnity, especially in Portugal as well as the Catholic world as the feast day of Our Lady of Fatima. Under the shadow of the sufferings in the world due to the pandemic, let all those who believe in the intercession of Our Lady of Fatima through Jesus Christ pray that blessings be showered on our various pharmaceutical companies that are struggling for a vaccine and a cure for Covid-19 pandemic so that safe and effective vaccines and cures may be developed to protect the world from the deadly Covid-19.
Also may blessings in great measure be showered on doctors, nurses, Covid-19 laboratory testing personnel as well as all other health care frontline workers who are putting their lives at risk to treat and care for the large number of patients infected with the coronavirus. May they be blessed so as to have the strength and stamina to carry on their yeoman service to humankind across the world. If our collective devotion to Our Lady of Fatima can result in a miracle, the world will have been saved from this pandemic. The belief of men and women of goodwill can make a miracle happen for all.
—Elvidio Miranda, Panaji

FREE FR STAN SWAMY
We at the Council for Social Justice and Peace (CSJP) are aghast and distraught upon learning about the arrest of 83-year-old Jesuit priest Fr Stan Swamy by the National Intelligence Agency (NIA). This is with total disregard for the dignity and rights of an acclaimed human rights crusader. Fr Stan has devoted almost five decades of his life in lobbying and advocating for the rights of the Adivasis, especially their land rights in the State of Jharkhand.
To question the validity, legality and justness of several steps taken by the government in defence of the human rights of the voiceless and victimised sections of society is the essence of any religion and also of our Indian Constitution. It should not be construed as sedition. The nation just observed the 151st birth anniversary of Mahatma Gandhi on October 2, it is shameful that in independent democratic India an octogenarian suffering from several morbidities, is arrested from his home after dusk by the intelligence agencies and flown out of the State overnight in what appears to be malicious accusations of having links with some alleged political conspiracy.
The humiliation and harassment meted out to Fr. Stan gives the impression of a vicious design of the Union government to target the progressive work of the Christian community. It has always been recognised as a body of loyal, law abiding and service minded citizens committed to nation building and actively supporting several of government social welfare programs. There is now an apprehension in the community that by falsely implicating and dragging Fr Stan into an alleged criminal conspiracy of a political organisation, there is an attempt to brand Christians as anti-nationals and manufacture grounds to deny them their political space and curtail democratic rights and privileges.
The Council appeals to the government of India to immediately release the human rights crusader Fr Stan Swamy and allow him to return home. The government must ensure that the rights, duties and privileges of citizens across religions are safeguarded, and an atmosphere of peace and harmony in society is ensured.
— Fr Savio Fernandes, Executive Secretary, Council for Social Justice & Peace, Goa