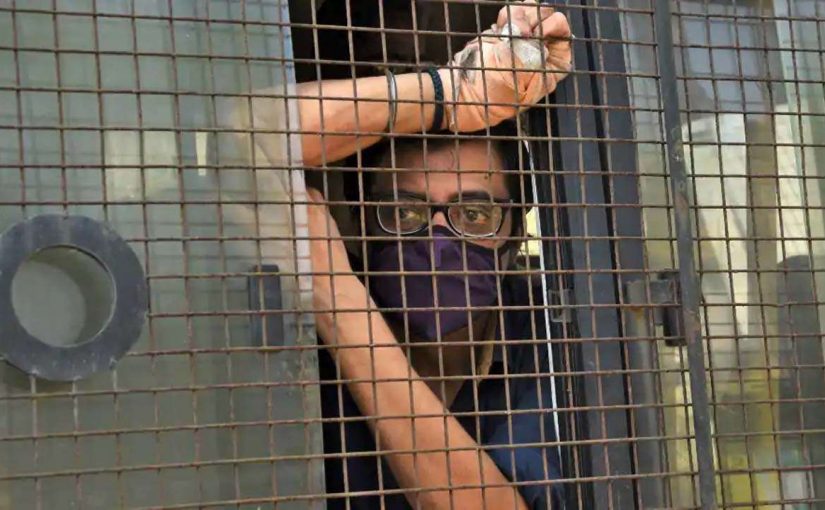 STAGED: There is no medical evidence of Arnab being beaten up by the Maharashtra police at his flat in Mumbai or on the way to Court from Alibagh. The High Court has upheld the right of the Maharashtra government to re-open the abetment to suicide case against him pointing out that the case was closed without intimating the complainant.

Agent of the BJP and Modi government Arnab Goswami was arrested not for any breach of media ethics but for abetting the suicide of an architect. Arnab‘s arrest was on the basis of a letter left behind by architect Anvay Naik, who named Arnab and accused him of with holding payment of `80 lakh plus for the interior decoration of the Mumbai office of Republic TV ……

Precisely at what point does a news channel begin to resemble a strange beast – a hybrid of reality TV and entertainment wrestling? We, in India, have now descended to a new low in journalism, but we need to have the courage to ask how ‘shrill news’ is so popular. There is nothing better than seeking answers by asking the basic questions that journalists should ask: what, where, when, how, and why.
Republic TV, unquestionably ‘top of the heap’ among English channels with its surging television rating points (TRPs), now stands accused of rigging its popularity through ‘bribes’, as it denies the charges.
It smells of politics both ways. The channel headed by the belligerent editor-in-chief Arnab Goswami has a long track record of confronting the Shiv Sena-led government in Maharashtra after it fell out with former ally BJP, to which the TV news anchor is unusually and consistently kind in an otherwise boisterous style. On the other hand, it is rather odd for the police commissioner of the nation’s financial capital to hold a news conference to announce an alleged TRP scam.
How Arnab Goswami Broke Rules Of Journalism – And Gained Popularity But Not Credibility
What we know is that news channels have come a long way – probably in the wrong direction. Arnab Goswami may be an ‘anti-hero and icon’ at once to his followers, but what he effectively does is to break all the rules of journalism – and still manages to succeed in ‘popularity’, though not credibility.
TRPs tell their own tale. Republic TV has rivals including the channel that he helped start, Times Now, and Hindi channels clamouring to get a slice of an audience that is either charmed into or served by sting operations, the accusatory spinning of half-baked facts and panel discussions in which a dozen faces shout to be heard or are being shouted down by an anchor. Things have gotten worse just when we thought they could not.
Irony of ironies, lies and fabrications are now touted as news – with no shred of evidence or meaningful sourcing as we witnessed in the news after the tragic death of actor Sushant Singh Rajput. Republic ends up giving legitimacy to sources that in conventional journalism are ignored at best, and guarded against in normal times.
We need to ask how we got here.

How Did We Get Here?

In the early 1990s, when India started news channels gingerly after economic reforms made things easier for satellite broadcasters, the model to follow was of CNN that made a mark during Iraq’s invasion of Kuwait in 1990 as a visual medium to watch the news as a spectacle. Having known Arnab as a mild-mannered, affable gentleman, I have reasons to believe I know how he got to where he is now.
As a straight-talking army officer’s son from Assam, he must have felt kind of lost as a reporter in the NDTV newsroom with its horde of liberals sporting affected accents. But there is more to NDTV finding a slayer than a personality trait.
Elsewhere on the planet, media baron Rupert Murdoch launched Fox News in October 1996, rewriting the rules of TV news the way he had done with the print medium a decade or two earlier, swapping independent editors believing in news judgement with market-minded news executives.
An Indian equivalent of that slot was ready to be taken, but the Kargil War and the sheer freshness of TV as a news medium kept India safely insulated from the right-wing, in-your-face journalism.
Such honeymoons don’t last, it seems.

When Did Arnab Goswami Find His Moment Of Arrival?

Now, consider that India was now becoming a fast-growing economy with a neo-literate, neo-consumerist middle class that had its own idea of what news should be. As a research paper from the University of Maryland argues, the Gujarat riots of 2002 resulted in right-wing perceptions of a liberal bias in news coverage.
When Times Now was launched in 2006 with Goswami as its founding editor-anchor, the Fox niche was begging to be filled in India. That was also the year that Steve Jobs launched the iPhone. Quietly in the backdrop, Mark Zuckerberg had launched Facebook in 2004. Perfect conditions had emerged for a heady, noisy mix of socially empowering technology, a newfangled market segment and an already loud democracy graduating from concerns on inflation and caste to outrage over corruption.
A year later, Anna Hazare started a famous fast that became a rallying point against corruption. In either supply or demand or a fortuitous convergence of the two, we had the definition of a star anchor shifting from a stylish, authoritative presenter, to a public prosecutor-like figure waving sheaves of paper and asking tough questions to no one in particular.
Last but not least, it had become a propaganda vehicle for a resurgent opposition BJP now sitting pretty in power. Goswami, now a dubious precedent or inspiration for anchors in Zee News, Times Now and some other channels.
How Arnab Goswami Became The ‘SRK’ Of News & ‘Superman Without A Cape’

It is here that Goswami became the ‘Shah Rukh Khan of news’, in a manner of speaking. The Bollywood star had once famously said that an iconic myth surrounded his screen persona and he was now working for that image of Shah Rukh Khan. “So I work for that myth,” SRK had said. If the romantic, somewhat humorous and energetic myth defined SRK, a parallel myth was being created in the Times Now newsroom – of a no-nonsense, patriotic, corruption-busting anchor.
His fanboys love it. They identify with his mythological psyche – of being let down by a system that they are out to fix. No complexities of balancing the story here. No time for a ‘no-comments’ formality.
This Spiderman, however, has webbed feet that bring slush to the living rooms of those seeking plain news. The mud he flung and stil flings is not explained.
The detective was out, the supercop was in.
He started Republic TV in 2017, by which time Modi was firmly entrenched in New Delhi as a parallel echo of the clean-em-up zeitgeist. Republic’s meteoric surge has paralleled that of the PM.

The TRPs are such that advertisers cannot ignore them.
According to the Broadcast Audience Research Council (BARC) data, Republic TV had 5.05 million impressions in the week ended 2 October, followed distantly by Times Now at 1.87 million, and India Today TV at 1.81 million. The first two clearly have a shrill latter-day style while the third has a mix of the old and new.
In a sense, the whole phenomenon of 9 PM ‘noise’ shows the hyper-democratisation of India in which an increasing sense of lower-middle class empowerment, the rise of social media and a general disenchantment with rulers set the stage for unconventional heroism.
But there is more to this than news as a harangue. If the Commonwealth Games were about questioning the government, the death of a Sushant Singh Rajput turned the news business into a concoction of hearsay, guesswork and abusive allegations. Media research now confirms a narrative shift in the Sushant story from alleged suicide to a murder ‘conspiracy’, ably aided by the BJP’s social media machine. If media management was earlier about spin-doctoring, here is a new extreme, one in which random associations and conjectures acquire a definitive air.
Viewers Like Outrage, News Anchors Feed This Addiction
Research by journalism think-tank NiemanLab suggests that journalists are themselves divided on how to carry the profession forward in an age of ‘mob censorship’, in which social media harassment of old-fashioned professional journalists is quite common.
In that sense, the rise of noisy, insinuation-laden news is a global phenomenon in which the hard-wiring of the citizen’s brains is part of the problem.
Comedians like Kunal Kamra now chase Goswami in a surreal play even as the anchor’s fanboys praise his style on social media as a ‘brutally honest’ form of ‘investigative journalism’.
Carl Woodward and Bob Bernstein, who exposed US President Richard Nixon in the 1970s as investigative reporters at Washington Post, were prodding quietly for months to reveal scandalous information – a far cry from the current mix of paparazzi reporters who hurl accusations and broadcast no-reply silences as breaking news.
The times are such that the audience sees accountability as an entitlement, and shrill anchors feed on this by building a gallery and then playing to it.
(The writer is a senior journalist who has covered economics and politics for Reuters, The Economic Times, Business Standard and Hindustan Times. He tweets as @madversity. This is an opinion piece. The views expressed above are the author’s own. The Quint neither endorses nor is responsible for them.)
Liked this story? We’ll send you more. Subscribe to The Quint’s newsletter and get selected stories delivered to your inbox every day. Click to get started.