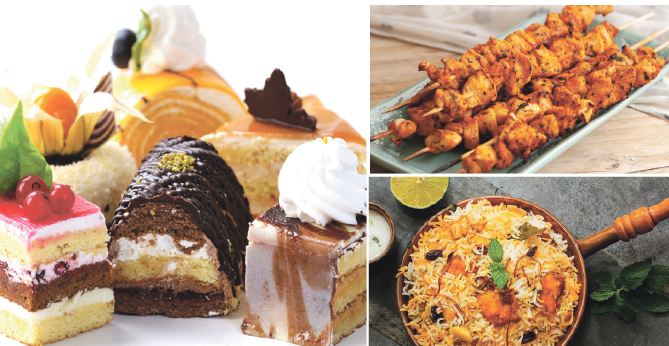 IT’S like people are waking up after the lockdowns of Covid-19, my dears, and I’m getting used to the fact that more and more folk will want to feed us to the gills to remind us we are mortal and life revolves around food morning, noon or night and in between. The I bumped into Goan Chef Xavier Francis of oh so long ago 5,555 cup cake fame extravaganza at the Goa Marriott Resort & Spa, it was a spread like no other and for a while cup cakes were all the rage and everybody was feasting on dainty cup cakes of chocolate and green chili and marmalade and jalapenos and pesto and caju feni and even kokum! Ah, I remember this Chef Francis who an entrepreneur most extraordinaire.

He tells me he and some chefs including Chef Sunil Soni are now getting launch a blitzkrieg of goodies – the sky is the limit for confectionary with cakes, stuffed doughnuts (done in Airfryer), cake offers at half-price for seniors and children! Also, there will be kebabs, biryani, pancakes (there’s going to be a Pancake Tuesday, Kathi Rolls Thursday and Pop Cakes Friday – he says “pop cakes is just another name for cup cakes!” Yes, whatever you want, it will be delivered at your doorstep Zomato and Swiggy of course! White-collared delivery boys are earning fortunes these days and I wonder if these hundreds of doorstep delivery boys or young men are a happy lot with the lifestyles enforced on them of being constantly on the run delivering foodie item numbers to this who sit and grow more and contented or discontented in the confines of their plush homes!

Amazing rollercoaster man this Chef Xavier Francis. His Indian Bake House comes alive fully come December for the Christmas/New Year season. He’s got a whole team aboard and hopes to swing it with ideas galore to leave young and old salivating for me. He introduced me to his team of Swarna, Immaculate Rebello, Jasmin Kadri and more….they’re all part of his Happy Women team, the good maestro chef tells me without a blink! Don’t do too much junk food confectionary, I appeal to Chef Xavier Francis and he says no, no, “we’ll also have olive oil cakes and many kinds of plum cakes leaving you begging for me!” Well, good-luck to him. Me? May be I’ll check out the sweet potato pancakes and olive oil cake when the Indian Bake House starts rolling soon, very soon, watch out for it.

He may book me up as consultant if he wishes! I need an exciting job these days, anything but journalism!

YOU heard? Now we have an International Men’s Day every November 20. Well, the story of life is such that it’s usually I love men, I hate men scenario, but over a  Facebook post came this bit of social media literature was forwarded to me, it’s worth laughing or crying over! Put on your thinking caps and read it because some easy come, easy go man has probably written it as facile definitions go…

“Women are so difficult;

At 18, they want handsome men;

At 40, they want established men.

At 50, they want faithful men.

They never change their taste

No matter what the condition

At 50, they still pretty woman.

(Dedicate to all men for their disciplined! Happy International Men’s Day!)

Well, to all that I can only say there are women and women, and men and men, some you love, some you hate, some leave you indifferent…but always give them a chance and some extra leeway so you may bring out the good in them, sometimes easy to say, always hard to do!

FORGET all that! My long lost Chinese friend Ah Keop from Penang, whom I’d lost track of but re-found recently after 60 years of vacancy in my heart, sent me these thoughts to chew over on my latest birthday and  find more reassuring at the tail-end of 2020. Sharing them here for all to make a note of: