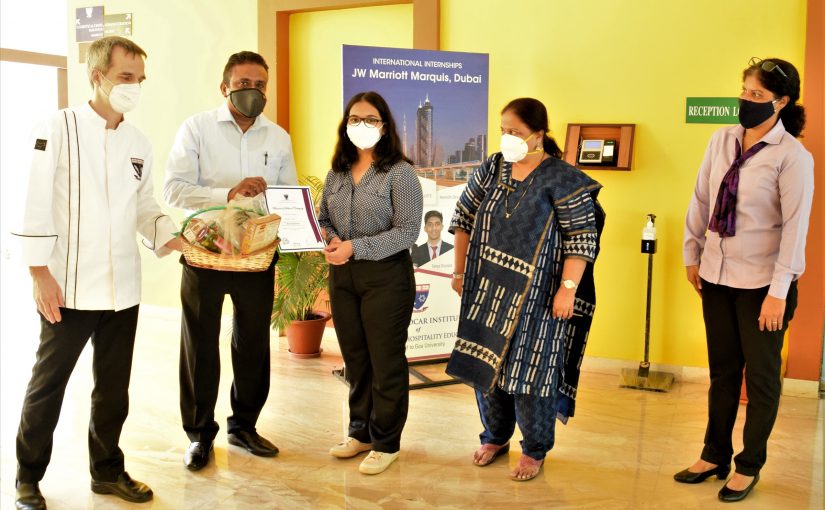 This year at the V M Salgaocar Institute of International Hospitality Education (VMSIIHE) at Raia down south Goa, they celebrated International Chefs Day with a culinary contest to inspire student chefs to be health-conscious in their creativity and cooking skills. Chef Sebastian Breitinger (professor, Culinary Arts at VMSIIHE) invited them to put up dishes featuring flax seeds and carrots and Nevan Fernandes with his dish La Carotte’ bagged the first prize; Neston Fernandes won second prize with hisWrap de Vegetal’ and third place went to Anirudha Sardesai for Carrot Fries with Flax Seed Sauce.’ Special mention went to Shreeja Gudi who created aFlaxseed Tortilla With Carrot Falfels.’ Altogether the students had fun learning a lot about making even gourmet food look good , taste wholesome and satisfy discerning taste buds in nutritive terms. May we have the recipes, please? Picture shows winning team!

GOANS by nature are very hospitable to the point of committing harakiri! As far as tourists are concerned we never ever intrude on even obnoxious behaviour, leaving it to the authorities to take action. However, the current pandemic situations have stressed out people no end. Holidaying in Goa may be a great stress buster but the government of Goa puts the local population at risk in these still serious Covid-19 times! Hardly any restrictions have been put into place.
Even people from Delhi who in the grip of a third wave are allowed free entry into Goa untested. Delhites may be seen roaming around without observing either the wearing of mask or social distancing. Now, Maharashtra requires Goans to carry negative test reports to enter their own state!
Do these happy go lucky tourists believe it is their birth right to roam the way they want to in Goa?Even if no strict SOP implementation exists, what absolves them from being responsible? How crude are they! A recent photo in a daily enlightened us about all the garbage they litter the beaches with.
People are cribbing that Indians travelling to Hong Kong are made to wait while other nationals have a smaller waiting time. They forget that Air India flights from India were banned once again as five passengers tested positive on arrival, despite carrying RT-PCR negative certificates. How we love playing the racist card! There is no sanctity or responsibility in India: We can see the culture in our tourists. Perhaps we need to inculcate or imbibe some much-needed changes at home first. They say education is the way: Online classes for people intending to visit Goa, TTAG? Is there any light at the end of this tunnel?
— R Fernandes, Margao

GLOBAL RESPONSE
INITIAL reports had it that the Covid-19 pandemic started either in the wet markets of Wuhan through bats or snakes or pangolins or the Virology Institute of Wuhan due to their experiments on fine-tuning viral infections and something went wrong there.
However, though China first reported the majority of cases, if reports are to be believed, China managed to control Covid-19 faster than the rest of the world. If America is taken into consideration, then there is no doubt that in America they abjectly failed in containing the coronavirus which led to over 2,50,000 deaths to date in America itself.
It’s a toll higher than even that of the recent wars fought by America in Afghanistan, Iraq, Syria, Yemen and the rest of America’s antagonists where the total tally of dead did not tally totally ever since 9/11 in 2001. While fatalities in America are ascribed to bad management and sloppy implementation of standard operating procedures, it must be agreed that the American health care system is one of the best in the world.
So what baffles most: Why did over two 2,50,000 persons die in America? Was it abject neglect of following norms like social distancing, wearing of face masks, use of sanitizers as well as washing hands as also maintenance of environmental hygiene or was it the tardy way of life of Americans which makes them more vulnerable to the deadly coronavirus?
Just like China should accept the blame for brokering Covid-19 to the rest of the world, Americans must come clean about how they could not reduce fatality rate by better management of the pandemic. Perhaps it is true that those who died suffered from a relatively greater percentage of comorbidity and so the death toll spiralled out of control.
In small measure if we consider the global toll of over one million deaths, it can be ascribed to the fact that our oceans, seas, trees, account for 50% respectively for the recharging oxygen in the atmosphere. Large scale environmental and ecological tragedies due to felling of trees, forest wildfires (such as the ones in the Amazon basin), as well as wildfires and drought in Australia…coupled with pollution due to greenhouse gas emissions and in particular fossil fuels, could be significant reasons for depletion of normal oxygen levels in the air we breathe and so the world becomes more susceptible to respiratory disease.
At least 10% of oxygen that would have been released by oceans and seas have been reduced and due to air pollution the toll worldwide might have been contained by 10%. Climate change is one of the paramount reasons why death tolls are increasing and could have been rescued at least by 10% to 25%; Brazil, India, United Kingdom, Spain and Italy are also countries that did not respond well to saving life!
— Elvidio Miranda, Panaji

CAN THE POLICE TAKE SIDES?
IN keeping with the provisions of the law the Supreme Court has reiterated through various judgments that the police have to be totally and absolutely insulated from any political influence or machinations whatsoever. Bureaucrats, regardless of their position, are duty bound to uphold only rule of law at all times.
Bearing this in mind the statement made by Goa’s current DGP Mukesh Kumar Meena is outrageous and very high handed. While publicly threatening those who are trying to save the remaining “lungs” of Goa, DGP Meena over crossed his brief to state that the three controversial projects impacting Goa are of national interest and are being executed after proper study and research.
On what basis has the DGP come to that conclusion? Or taken upon on himself to speak on policy decisions taken by the Government? Doesn’t our DGP know that the projects are of no use to Goa and will in fact affect its environment and are being opposed by people across the State, including even some ministers and ruling MLAs?
Such a biased statement by the DGP is reckless and tarnishes his reputation, he is acting as a political tool of the government of the times. DGP Meena should seek voluntary transfer out of Goa or withdraw his statement as also apologize to the people of Goa.
Goa’s current miserable state of law and order is there for all to see. It reflects the inefficiency of a now politically controlled and manipulated Goa police who by their acts of omission and commission fail to ensure that the law inspires trust and justice in the eyes of the common people. It may be remembered that Goa was once a most tranquil and peaceful state. Can we question the partisan attitude of DGP Meena who should set an exemplary message to his police force? Sadly he is now a proven mouthpiece of the government!
He should remember that integrity is the foundation of any law enforcement agency. Police officers are dedicated public servants who have sworn to protect public safety at any and all times. They must uphold the law and not act like they are cheer leaders of a government in power. DGP Meena is not entitled to make political statements but instead should reflect on why all criminal offences in Goa are not being duly registered. This government projects to theworld that Goa is a safe haven but the grim reality is starkly there for all to see.
I remember how Goa’s police was captained by an IGP of the early 1970s, MB Kaushal, and have many memories of his interacting with him and also every subsequent IGP and the DGPs who served in Goa. I have seen good, very good and not so good, and DGP Meena in his short tenure is proving beyond reasonable doubt that he is stepping beyond his brief as a police chief in Goa!
— Aires Rodrigues, Ribandar