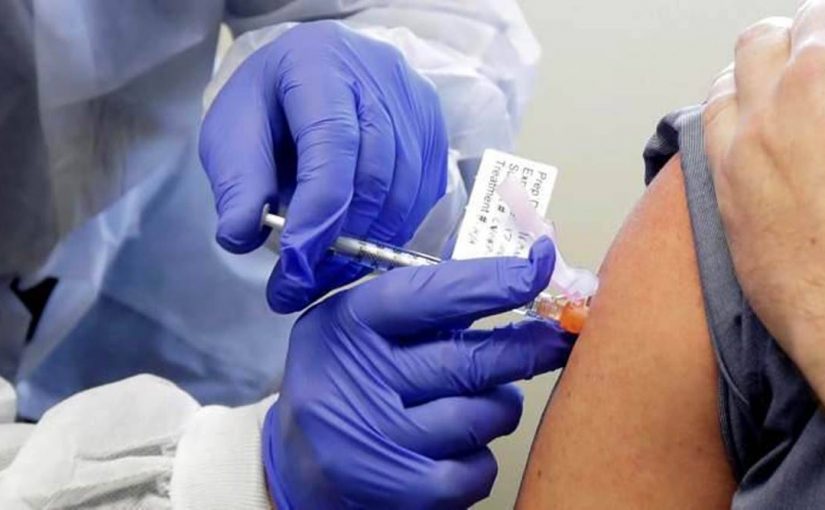 UNSAFE: It has been alleged that the Oxford vaccine had an adverse effect on a volunteer from Chennai who has claimed Rs5 crore damages.

AND a few stray thoughts for yet another Saturday. For a Saturday following the week when there was confusion on who will be vaccinated against Covid-19. For a Saturday following the week when further restrictions were placed on the Margao Urban Co-operative Society. For a Saturday following the week when The Times of India failed to mention the unique civil marriage under the Uniform Civil Code exclusive to Goa. For a Saturday following the week when due to the destruction of the environment the temperature in Goa is rising much above the national average.
And a few stray thoughts on the controversy over who should be given the Covid-19 vaccination. There is also the issue of priority in terms of who should get it first. Obviously it is not possible to vaccinate all 330 crore Indians within a reasonable period of time and even if it is possible it’ll take a very long period of time. If one includes the challenge of vaccinating all the people of India and China which are the two biggest countries in the world, one can imagine the challenge.
Though people are waiting anxiously for the Oxford vaccine which is likely to be available by the beginning of 2021 the demand is so high that only a limited number of people can be vaccinated. It may take ten years or more to vaccinate the entire population. The anxiety to get the vaccine is so high that Oxford is reported to have kept silent over a problem which arose. Apparently one of the volunteers who had offered to participate in the trials had severe side effects. Apparently the Pune based Serum Institute of India (SII) did not consider it necessary to stop the continuation of the trial, even though the victim was an Indian!
Now we hear the Chennai-based volunteer has sought a compensation of Rs5 crore as his health worsened during the clinical trials of the Covid-19 vaccine developed in UK’s Oxford University. The Indian Council of Medical Research (ICMR) has suggested that it may not be necessary to vaccinate the entire population of India. If a critical mass of people are vaccinated it would be adequate to break the chain of viral transmission.
However, everyone has agreed that the Covid-19 warriors, including doctors, nurses and healthcare givers who have been helping to fight the virus, will get first priority when the vaccine is officially declared safe for use on human beings.
The Modi government has also not decided either a timeline or who will get the vaccine first. Indeed, as pointed out earlier there is no plan to vaccinate the entire country. As it happens in India it will be the rich and the powerful, the bold and the beautiful, who will get the vaccine first. This will of course include politicians and people who have influence with politicians and senior officials.
It is unlikely that the poorest of the poor who probably need the vaccine most will get it in their lifetime. The present target is to vaccinate 25 to 30 crore segment of society which the government considers priority population. This will include health care and front-line workers, senior citizens and those who have co-morbidities complications. There are also questions being raised over whether people who have recovered after getting infected should also be vaccinated? This is because there have been several cases of a repeat infection from various parts of the country.

AND a few stray thoughts on further restrictions that have been imposed on the Margao Urban Bank. The Mapusa Urban Bank which was dominated by former Union Law Minister Ramakant Khalap has been closed down completely. In the case of the Margao Urban Bank the amount of money that can be withdrawn has been reduced to Rs25,000 from the earlier Rs50,000. All the co-operative banks in the state including the apex bank Goa State Co-operative Bank is also facing problems. The management of the bank has been sacked and it is now run by an administrator. There are many smaller co-operative banks like the one started exclusively for women which also closed down within a year.
Over 200 State co-operatives have incurred a collective loss of Rs90 crore. Elsewhere in the country also several co-operative banks like the Laxmi Villas co-operative bank have come under scrutiny of the Reserve Bank. The Lokmanya Bank started by the Tarun Bharat editor Kiran Thakur could be the next causality. IT is necessary to understand why there is such a high failure rate among co-operative banks. This banks are normally started by a small group of influential businessman. While the public face of the Mapusa Urban bank has been Ramakant Khalap the Margao Urban Bank has been controlled by Former Chief Minister Digambar Kamat. Similarly the Bicholim Urban Bank has been dominated by the Zantyes. Because of the reputation of the promoters the co-operative banks get a lot of deposits. It must be noted that part of the reason why they get large deposits is because they offer higher rates of interest.
For instance when both public and private sector scheduled banks are offering an interest of 5% on FDs the Lokmanya society is offering from 6% to 9.5% with a special 10% rate for senior citizens. The other major factor why co-operative banks fail is that the bulk of the loans are taken by the promoters themselves. Though Ramakant Khalap has denied it has been alleged that he gave a huge loan without any security to the son of then Prime Minister Deve Gauda without any security. We understand that the loan has since been repaid. Since the directors and their kith and kin are the major borrowers it is difficult to get them to pay back the loans in time.
In the majority of co-operative banks it is even difficult to secure the interest on the loans let alone the principal amounts. The losers are the greedy depositors who put their money in co-operative banks lured by the higher rates of interest. The co-operative banks are able to get away with their sins and omission and commission as they are not under the control of the Reserve Bank of India directly.
Unlike co-operative banks public sector and private scheduled banks have to maintain a certain percentage of their deposits with the Central bank. But even public sector banks are not totally safe as if they fail you cannot get all the money that you have in FDs or current bank account. The maximum amount covered under the deposits insurance scheme is Rs5 lakh. So if you have more them Rs5 lakh worth of FDs it would be wise to distribute them in units of Rs5 lakh among several public sector banks.
A link issue is the Modi government proposal to give banking licenses to big businessmen like Mukesh Ambani and Gautam Adani. Before the nationalisation of private banks by the late Indira Gandhi there were many private banks run by industrialists which collapsed. Interestingly, among the private sector banks that collapsed was the Bharat Bank owned by Ramkrishna Dalmia who was the then owner of the TOI group.

AND a few stray thoughts on the Goa edition of the Time of India. In the wake of the controversy over love jihad and the special marriage act the TOI has carried an article on the wide variety of marriage laws in the country. TOI has mentioned the Hindu marriage act which also applies to Buddhists, Jains and anyone not Muslim, Parsi, Christian and Jewish.
It mentions the Muslim marriage law under which marriage is not a sacrament but a civil contract. With no religious ceremony or writing required. Muslim family law is governed by the Shariat Application Act (1937) along with customs and fatwas which are not legally binding. Muslim marriages only require the proposal (ijab) under acceptance (qubool). Consent must be free and not obtained under duress. The contract also stipulates the mehr which is the amount paid to the bride by groom.
The groom is allowed to have up to four wives according to the Quran. The first wife’s approval is not needed but fairness amongst all wives is essential and nikkah mutah or temporary marriages are invalid under Sunni custom, but allowed amongst the Shia Muslims. The Supreme Court has barred the custom of triple talaq divorce in force earlier.
The TOI mentions the Christian marriage which is governed by the Christian Marriage Act 1872. Under this act at least one of the parties has to be Christian and marriage must be solemnised by a recognised priest. The Parsi community is governed by the Parsi Marriage & Divorce Act 1936. The marriage must be performed by a priest in the presence of two Parsi witnesses. Parsi marriages are also contractual.
To facilitate inter-community and inter-caste marriages Parliament enacted the Special Marriage Act 1954 for any Indian couple irrespective of community of origin, interstate couples as well as anyone who wants to opt out of their personal religious law and have a civil secular marriage. Ironically, the local edition of the TOI has failed to mention that Goa already had a Civil Marriage Act.
As part of the Uniform Civil Code the Portuguese colonial government had stipulated that only civil marriages were valid in the colonies controlled by them, including Goa. Under the civil marriage act which was accepted even after Liberation, the couple have to give a month’s notice to the Registrar of Marriage.
At least one of the parties getting married should have stayed continuously in Goa for a minimum of six months. The minimum age of marriage is 18 years for women and 21 years for men. The parties to the marriage will also have to provide proof of age and residence certificates. The registrar puts up a notice on the intention of the couple to get married on the notice board in the Registrar’s Office. If there are no objections the marriage officials have the right to confirm the marriage.
Unlike in the case of Christian marriages where divorce can only be obtained from the clerical judges appointed by the Bishop; even Catholics who have got married under the Goa Civil Marriage Act can get a divorce through the courts. Though their divorce would be invalid in the eyes of the Church. Ironically, the Bharatiya Janata Party (BJP) has been demanding the extension of the Uniform Civil Code prevalent in Goa to the entire country.

AND a last stray thought on the rising temperature in Goa due to the mindless environmental distraction. The State’s mean temperature of 26.5 C degree is higher than the national average. The continuing rise of temperature is of relatively recent origin. The temperature started rising in the 70s which co-insides with the cutting of trees and the concretisation of Goa.
If the three environmental projects sought to be implemented and including the double tracking and 400 mega-watt substation in Mollem become de facto the temperature is expected to rise to 30 degree C on average. When I first came to Goa in 1993 there were only green paddy fields on either side of the Miramar-Dona Paula inner road through Caranzalem. In 2020 I can only see huge concrete monsters on either side of this road. This concretisation extends to the whole agricultural village of Taleigao, of which Atanasio Babush Monserrate is the chairperson in both the PDA and TCP. This mindless construction is what is contributing to the rise in temperature. It is estimated that over one lakh trees will have to be cut down for the laying of the double tracking of South Western Railway alone.