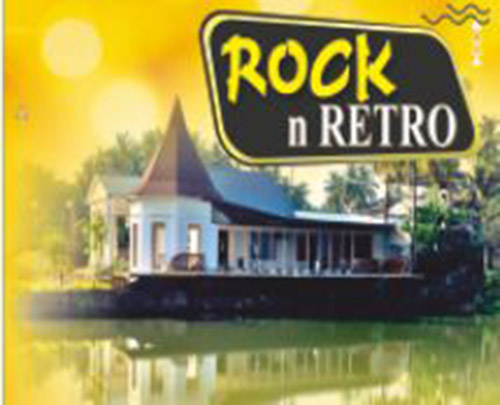 IRRESPONSIBLE: The owner of OHeraldo’ Raul Fernandes, who has built a huge event deck on reclaimed land after destroying mangroves, announced a major new year event on a poster put up on the Panjim-Santa Cruz highway---- and called itRaul’!

And a few stray thoughts on the RSS Chief Mohan Bhagwat vetoing the proposal of the Chief Minister of Goa to grow ganja in Goa. It is not clear if Chief Minister Pramod Sawant has also gone back on legalising the use of cannabis for medical purposes. The conversion of innocent Goa into “sin city” began with the Portuguese. The Portuguese colonial regime apparently decided that the best way of maintaining control over the ethnic population was to keep them permanently drunk. So they encouraged the production, sale and consumption of cashew feny. Incidentally, the caju tree is not an indigenous tree but imported into Goa by the Portuguese. Just as the mirchi bhojia which Goans enjoy eating so much. The Portuguese kept the taxes on not only feny but even the best scotch very low.
Regrettably, successive Goan governments have also kept the tax on liquor much lower than the neighbouring states. If lakhs of domestic tourists come to Goa only to get drunk and throw broken bottles on the beaches it is because liquor is so much cheaper in Goa then in Mumbai or Bangalore. The drugs came with the hippies and the flower children of the 60s. In the wake of the Vietnam war, thousands of young people found their way to Goa and settled down treating it as a paradise. It was a place where they could consume narcotics substances without any interference from the police. Where they could walk about in the nude on the beaches without locals raising any objections.
It was because of Portuguese colonial culture that Goans got used to women sunbathing on our beaches with little on. The police in Goa as dramatized by the Atala case did not interfere in the drug trade but even sold drugs they had seized from foreigners. Drugs have been the major source of additional income for the Goa police. If the foreigners on rented Bullets did not have drugs police even threatened to plant drugs on them — unless they get a bribe!

Then came the casinos. The first casino Caravela was brought in by the late Manohar Parrikar when he was supporting the rebel Sardinha government. Sundar Advani, the owner of the first casino Caravela, was a close friend of Home Minister LK Advani who in Atal Behari Vajpayee’s BJP government. For almost a decade Sundar Advani had a complete monopoly on the casino business. It took Jaydev Mody, equally close to the top BJP leaders, to break the monopoly with his Deltin casinos. Jaydev Mody also brought the casinos vessels imported by the Leela Group and Victor Alburqurque. Jaydev Mody also set up casinos in Daman which is a former Portuguese colony. He renamed his original company High Street to Deltin Corporation and set up hotels for his guests. He plans to set up a huge entertainment complex near the upcoming Mopa airport where he will shift all his offshore vessels to create an integrated entertainment complex over 100 acres of land.
The newest attraction for tourists coming to Goa will be the availability of ganja/ cannabis/marijuana as it is called variously. It is a natural plant considered to have hallucinogenic painkilling properties. It gives you a pleasant feeling of euphoria. It is used for medical purposes very widely abroad. And admittedly in many states of the United States of America possession and consumption of cannabis or ganja is considered legal. Marijuana or ganja is taken in several forms such as rolling the leaf of the plant into a cigarette or a beedi. It can be put on the chillum and smoked. The stem of the ganja plant is considered very strong and it was the drug used in the party given by Karan Johar. And which was allegedly given to Sushant Singh Rajput by Rhea Chakraborty, his live-in girlfriend. Ganja is very widely available in Goa and in fact many foreigners may be growing it; otherwise it is brought from Himachal Pradesh.
According to Minister of Art & Culture Govind Gawade, ganja is also grown in Gokarna, the pilgrimage centre in northern coastal belt of Karnataka and in the Konkan region of Maharashtra. The problem is not with the ganja itself which is very cheap compared to the adulterated narcotic drugs used by the poorer classes of Goans and tourists. The problem is adulteration. The greater problem is that the Russian and Isareli drug paddlers will spare no effort to get ordinary ganja users to upgrade to deadlier drugs like cocaine or ecstasy or LSD which are downright dangerous.
Unlike ganja the synthetic drugs and cocaine are extremely addictive. The argument is that cigarettes are far more harmful than ganja. Which is true but unless the government is going to ensure strict control on the growth, distribution and consumption of ganja there is a risk of wide spread adulteration which is already happening with alcoholic drinks.
Go to any wine shop where a bus load of tourists stop to buy the permitted quantity of two bottles. You will find nakli versions of noted brands of whisky for Rs50 per bottle of 750ml. The bulk of the feny you get in Goa is adulterated. Ganja of course may be an additional huge source of revenue to the government. But dum maro dum will only further reinforce Goa’s growing reputation as the Sin City of the country where everything chalta hai.

AND a few stray thoughts on six cases of the mutant variety of the new Covid-19 being identified in the country. Fortunately, none of the cases identified so far are from Goa. Even though more than 2,000 Goans have come from London and the UK since November 15 when the new strain was discovered. Among those found infected by the new strain is a 47-year-old woman who has managed to give the authorities the slip after arriving in New Delhi from the UK after December 21. She is from Andhra Pradesh. The other victims include a two-year-old girl who tested positive for the mutant variety.
The patients who are infected with the new mutant strain of the corona virus have been detected in Bengaluru, Hyderabad, Pune and Meerut. What is more shocking is that the Municipal Corporation of Pune has not managed to trace the 109 travellers from UK who are from Pune. Orissa is also facing problems as 74 more people who travelled from UK to Orissa have not been traced. There are many passengers who landed in Mumbai and could have come to Goa by road.
Most of the vaccine manufacturers claim that their vaccine would be equally effective against the new mutant variant. With Goa spreading out the red carpet for tourists without checking or strict precautions in place a disaster is waiting to happen. While air passengers pay Rs4,500 those coming by buses, cars or trains, do not have to undergo any test while coming to Goa. Photographs of crowded beaches have appeared in the local newspapers revealing that few of the tourists bother to wear a mask or maintaining required social distancing.
So chances are post-New Year we may witness a big wave of Covid-19 positive cases. Our appeal is simple. Other new year eve’s and new years will come again and again but life comes only once, unless you believe in the theory of reincarnation. The least that the Goa government can do is to declare a lockdown at least on December 31, 2020 between 9pm to 6am like the Karnataka government has. The situation in Goa is so bad that the Deltin Casino people are distributing Rs500 vouchers to encourage people to gamble on new year’s eve all night. Both Goans and tourists have to decide whether they want to live or go to the morgue in the GMC.

AND a last stray thoughts on a Goan version of love jihad in which I played a small role. Over two decades ago the daughter of a Muslim minister in the Rane government got married secretly to the brother of a now well-known doctor. The Registrar of Marriages unfortunately for the couple met the minister at a party. The registrar congratulated the minister on the marriage of his daughter but of which the minister knew nothing about! The minister rushed home and confronted his daughter. She made some excuse about mistaken identity and in the meantime packed her bag and eloped with her husband.
I was in the Herald those days and got a call from a good friend who runs a beach resort in Dona Paula. It was almost midnight and the good doctor who owned the resort insisted that I should come to his house immediately. I took the office jeep and rushed to his house to see what disaster had happened. There I saw the couple sitting, looking very frightened. I called up the Muslim minister and told him that the children were already married through civil registration. Jab miya razi toh kya karega kazi? The minister was furious. He told me that his wife was related to the chief maulvi of Vasco. That his wife’s family was so orthodox that they might even kill the daughter and the husband!
I told the doctor to let the couple stay in my underground basement flat in Dona Paula where I lived alone. The couple moved to my flat and I suggested to them that they should send a letter to the minister and his wife. I gave them some red ink on which they wrote that they would rather commit suicide like Dona Paula than be separated from each other! Our minister’s wife became panicky. They knew that their daughter was very strong-headed and was capable of carrying out her suicide threat. The minister told me that they would agree to the wedding and wanted to meet the couple.
The couple, particularly the bride, did not want her father to know where she was as she knew that as minister he could get her kidnapped and married to somebody in Gulf. I told the minister that I could not permit him to meet his daughter till there was a settlement. I ask him to send a common friend to mediate. So another senior minister and his wife came and spend an entire Sunday in my basement flat. It was agreed that the civil marriage would be ignored and an engagement would be arranged the same night. It was agreed that at least for nominal purpose the boy would change his name to Kaif from his Christian name. The boy, however, refused to have himself circumcised. It was also agreed that the boy would convert to Islam at least as a token gesture. The baraat comprising the couple and the mediators proceeded late in the evening to the Bambolim Beach Resort. The groom’s family joined them there. By that time it was 11 pm and all the jewellery shops were closed. I had one of the jewellery shop opened and got an engagement ring for the couple. Close to midnight the engagement took place. Subsequently, there was both the nikaah and the Catholic wedding. The couple still live happily ever after! In fact, I understand that it was the only marriage in the minister’s family which has flowered and not broken up like the marriage of his sons.