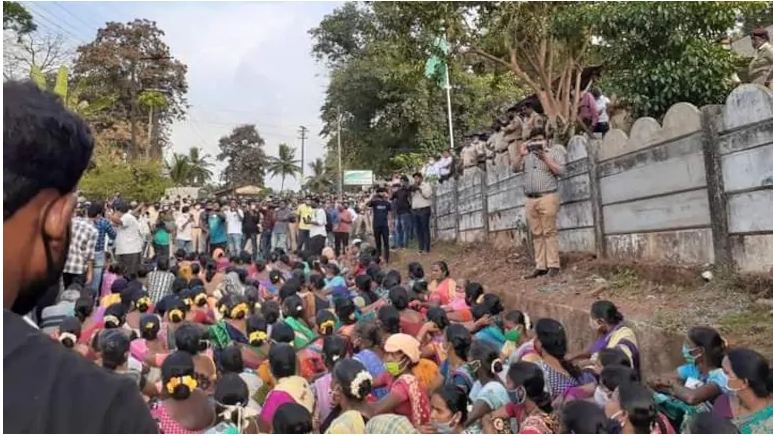 INSTIGATION: The police assault on the peaceful protesting women of Melaulim was allegedly instigated by Manoj Parob and his followers.

It is the so called Revolutionary Party led by Manoj Parob which was responsible for the violence in the Melaulim village over the location of the IIT campus. The local tribals were protesting peacefully till the outsiders infiltrated and started attacking the policemen. Manoj Parob is dangerous because like Donald Trump’s goons he is a supremacist. The Minister for Health and Valpoi MLA in whose constituency Melaulim is located has listened to the “voices of the people” and will demand the shifting of the IIT campus to some other locations…

THE global resentment for outsiders appears to have spread to Goa. There is a new group, which I suspect has been floated by Satish Dhond, the organising secretary of the RSS in Goa. A “thug” who, is a protégée of Amit Shah and is the actual boss in Goa. It is Satish Dhond who runs the government and not Pramod Sawant. The late Manohar Parrikar, who could not tolerate the crude goonda, had him removed from Goa. He returned to Goa soon after Parrikar went to Delhi to take charge of the Defence Ministry.
The Revolutionary group which claims to be led by a Manoj Parab is opposed to all outsiders. It has come up with the concept of POGO. Which means Persons of Goan Origin. It wants migrants out of Goa. Not just recent migrants but even those who settled in Goa since Liberation. The Revolutionary group is very similar to the super racist white race groups which supported Donald Trump when they took over the Parliament of the United States which is called the Capitol. It is claimed that there were as many as two million people in the mob that took over the Capitol. Some other policeman were taking selfies with the mob leaders. The “Trumpists” not only breached the security of the Capitol but entered the Legislative halls and briefly occupied the chair of the Speaker of the Senate. This happen when both the Senate and the House of Representative were in session. The legislators were threatened with guns by Trump’s goons and feared for their life.
Similarly, I am inclined to believe that the shameful assault on the villagers of Melaulim in Valpoi taluka, was instigated by the Revolutionary group on the instigation of Satish Dhond. The primary target are not the villagers of Melaulim. The protest is not against the location of the IIT in the village. The target was Shailendra Velingkar, the son of former RSS chief Shubhash Velingkar. The son of Shubhash Velingkar was brutally attacked in police custody according to the father. There is no doubt in my mind that Manoj Parab was part of the group who assaulted the women who were protesting against the location of the IIT in the tribal village.
As Samir Kelekar, the cyber security expert based in Bengaluru, has pointed out there are several other locations where the Goa campus of the IIT can be located. Including Farmagudi where there is enough space despite the presence of the Government Engineering college. So why is Chief Minister Pramod Sawant insisting on locating the IIT campus in Shel-Melaulim. Students and IIT faculty would be the first to oppose the location of the campus in an area where they are not welcome.
We understand that the land where the IIT campus is proposed to be located is technically government land. But the local tribal people of Goa were in possession of the land even before Liberation. So much so by the Act of Prescription they automatically have become owners of the land. In the records however, they are shown as encroachers. The villagers also have the right to register themselves as owners by virtue of the fact that they have been in possession of the land even before Liberation in view of the new law allowing fresh registration.
LAND COMPENSATION
IT is the matter of who should get the compensation if the land is acquired for the IIT project which is estimated to cost Rs1,500 crore. Since by the Law of Prescription the land belongs to the villagers, they should be compensated if it is taken over for building the IIT campus. The Pramod Sawant government of course is insisting that since they are shown as encroachers in the records, they are not entitled to any compensation. Apparently government land is not covered by the Tenancy & Munkar Act.
The most unfortunate part of the acquisition of the Melaulim village land is that it is forest land. It is land which belongs to poor tribal people who are barely literate. They would not know how to ask for compensation that they are entitled to. They are a soft target. If the government had decided to set up the IIT campus in Dona Paula it may have had to pay more than Rs10,000 per sq meter as compensation. The takeover of the tribal land is an act of dacoity by the Pramod Sawant government.
Unfortunately for Pramod Sawant he did not expect the women to come out in such large numbers to oppose the project. Pramod Sawant did not expect that 200 women would be able to chase away a 700 strong police force. They did not realise that the Revolutionaries had organised the revolt against the location of the IIT campus in Melaulim. When the police resorted to a brutal lathi charge, the women responded with the only weapon they had, which was stones. There is no confirmation on whether the police inspector stamped on the chest of a 50-year-old woman lying down in the protest. To me it seems unlikely that a police inspector, forget even a constable in Goa, will show so much disrespect.
The police picked up three youth Manoj Parab, Viresh Borkar and Alexio D’souza, for instigating the protest. There is no mention of the arrest of Shailendra Velingkar. However, the fact that he was beaten up in police custody is confirmed by medical reports.

There is a revolt against migrant settlers because they are now beginning to take over even the jobs in the government. Goans have always considered government jobs as being exclusively reserved for them. Strictly going by the rules, those who have spent more than 15 years in Goa continuously, are considered residents of Goans. Moreover, the children of the second and third generation of Goans who were born in Goa, are considered Goans entitled to apply for government jobs. On recent visits to the Goa Medical College & Hospital I have found that a large percentage of the nurses and even the doctors hailing from Kerala.This is because migrants from Kerala were among the first to come to Goa after Liberation to fill technical vacancies in the engineering and PWD department.
The last straw as far as the Revolutionary group is concerned is that even Lamanis have successfully applied and got government jobs. Many Lamanis have changed their names to Naiks so that they can pass off as niz Goenkars. I have never understood the prejudice against the Lamanis who are a tribe from Karnataka. They have a natural gift for languages and pick up even Russian and Hebrew used by the tourists on the beaches.
The harsh reality behind the revolt against outsiders is that there are very few government jobs left. Already there are more than 50,000 government employees in the State. So understandably the locals are worried about outsiders taking away the government jobs. Unfortunately, at least since statehood in 1987, a tradition has developed of MLAs and ministers selling government jobs. The most tragic part is that Goans have accepted this as normal and are quite willing to pay for jobs. The amount of the bribe depends on how many opportunities the post they are seeking offers to make money. For example, jobs like excise inspector or even direct recruitment to the post of police sub-inspector cost a lot of money.
I have had personal security officers who were police constables of over 20 years. All of them had to pay graft money to get their jobs. They were even willing to take a loan or borrow from their Provident Fund to pay the agent of the Minister or MLA for a government job for their relatives. The other factor off course is that every minister is obliged to provide jobs, even if they are paid for, to the people of their constituency. When there were no vacancies for attendants in the GMC, junior Rane who is health minister created new posts of assistant attendants to create jobs for his voters. This is true of every department.
Coming back to the global picture there is resentment against migrants in every country in the world including the United States. The reason why Trump has so many supporters is that even qualified Americans do not get jobs with big companies like Facebook and Google. In fact, many of the largest American companies are headed by people of Indian origin. Vice-president elect of the US Kamala Harris who take over on January 20 is a person of Indian origin. These companies find that they can get software engineers from India who are not only better qualified but are willing to work for much less money. In the Indian tradition once a member of the family gets a green card he gets the rest of his family jobs in the US.
There is resentment against outsiders in Europe. There have been riots in France against the migrants. There has been resentment against the large number of Indians and Goans who have taken up jobs in the UK and acquired citizenship. As the accompanying article shows worldwide there is opposition to outsiders. On the belief that the locals are being denied jobs as the migrants both legal and illegal are willing to work for much less. Hopefully all this will change with new technology coming in. Since the world is going digital there may be no need for migration. You can work from Silicon Valley sitting in your home in Caranzalem in Goa!