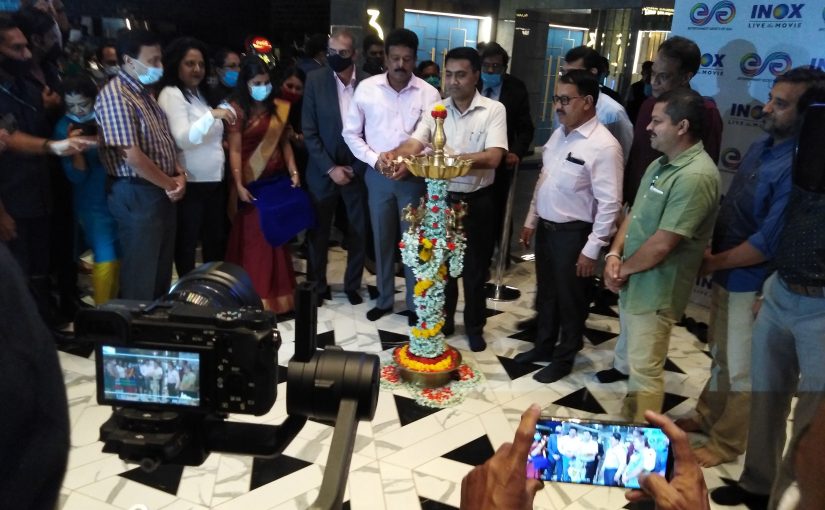 WITH LOVE FROM INOX!

Chief Minister Pramod Sawant lit the lamp for the formal re-launch of the INOX multiplex at the Old GMC complex in Panaji on Monday, January 11, 2021. The multiplex has reportedly undergone a Rs25 crore renovation and refurbishment and the brand new INOX now exudes more spaciousness, light, refreshments counters getting a new makeover. The CM is the chairperson of The Entertainment Society of Goa (ESG) hosting IFFI, others to be seen in the picture are CCP mayor Uday Madkaikar, Chief Secretary Parimal Rai, ESG Vice-Chairperson Subhash Phal Desai, ESG Chief Executive Officer Amit Satija and others who were engaged in seeing to the success of the festival which kicks off on Saturday, January 16, 2021.

THE “double” inauguration of such a simple event like the commencement of the hot mixing of roads has kicked up such a storm! The ignominious part is the haranguing of the PWD engineers with obviously no forthcoming action against the perpetrators.
If it is plaudits the minister, his supporters and local MLA crave for then they do not have far to look. In the same dailies that reported this incident, the PWD minister said there will be no stilts in the final portion of the Western bypass! So day by day we see that nothing is done for the safety of the people – only land grabs and land acquisitions! People are made to believe that commencement of hot mixing with no guarantee of this lasting for even a single monsoon — is all they are fit for. So much for professionals and local media being silent spectators and apple polishers.
–R Fernandes, Margao

CAST YOUR DICE!
ALL 40 MLAs of the Goa Assembly along with the two MPs and the one RS MP should come out openly on their individual decisions, immaterial of party affiliations and reflecting the majority will of the people of Goa on the fate of the three infra projects in Mollem, the IIT project in Melauli, the double tracking and the issue of the handling of coal by MPT and transportation of coal which will turn Goa into a black state. Not the green State is it famous for being.
The people of Goa are against these projects and it is time the elected representatives of the people of Goa took a decision to Yes or No, Full Stop. The original vote of the people was 17-13 against the dispensation in place which was also a stolen mandate in the cover of darkness and then, what followed with the shifting of allegiances by the 10 turncoats – our representatives are betraying the people who put them on the seat of power.
See how the elected representative of Valpoi has come out openly against the IIT project in Melauli, because of pressure exerted from the courageous Melauli villagers. ALL our representatives must now clearly stop these projects which are against the wellbeing of the people. The IIT project needs to shift to a location which not made up of fertile farm lands.
Goans may remember that those they voted for instead of keeping the interests of their voters, have not poodles of the ruling government!
— Elvidio Miranda, Panaji

RELIGIOUS STRUCTURES
THE government must strictly comply with court orders and not flout them. Despite various orders and directives by the Supreme Court the Goa government has failed to demolish and clear illegal roadside religious structures. This is clearly contempt of court. The wilful attitude of the State administration in keeping court orders in cold storage is deplorable.
The Supreme Court in September 2009, while ordering the demolition of all roadside religious structures, had directed that no constructions of religious nature be allowed down public roads and streets. But we continue to see these Hindu, Christian, Muslim religious distractions continuing to flourish across the State! Further, the Supreme Court in 2011 also restrained State governments from permitting the installation of statues or erect public structures in public at road corners where they are large trees, pavements made for the safety of the public and as side attractions where they just handicap the smooth movement of vehicular traffic.
All illegal encroachments on roads must be removed and new structures forbidden for this will add to the existing traffic problems. Religious structures where they should not be are a hazard for the public itself and responsible for constant traffic snarls.
It is an ironic that on one hand the government is broadening roads and pavements for pedestrian use, while many private entrepreneurs have blatantly seized the opportunity to blatantly enlarge their already existing illegal religious shrines! It would be a great achievement for the Goa government in this 60th year of Goa’s Liberation if we are freed from all illegal religious structures on roads, streets and public rest and recreation places.
— Aires Rodrigues, Ribandar