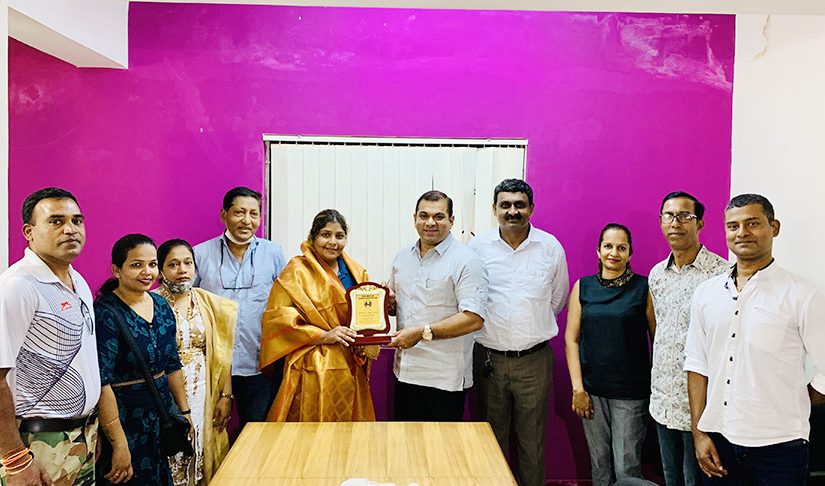 The new joint secretary (west zone) of Boxing Federation of India is now Danuska Da Gama, she is seen here being felicitated by Porvorim MLA and President of Goa Boxing Association Rohan Khaunte. Danuska was the former secretary of the Goa Amateur Boxing Association and is the only woman in the national federation, she registered a 33-31 victory against Rajesh Dessai of Dadra and Nagar Haveli Boxing Association; about her new appointment she was quoted saying “Being on the executive committee of BFI I will certainly do my best. I am extremly young as compared to the experienced members of the federation, but I hope to learn and look forward to working with the team.”

THE frontline health workers in India are reportedly vaccinated against Covid-19 but does this mean we may relax and all is well in Goa? Goa still loses at least two persons every alternate day with 784 dead the current shame. We attribute this to fate? It is laissez faire!
It is important we set objectives to have to get a clear picture of our goal and work towards it. If by ensuring that the show must go on will meet the objectives, then it can go on. We must take responsibility and accountability.
Goa’s objectives should be: 1. Covid deaths must not cross the 790 mark till all get vaccinated. The Collector must hold all objectives as his responsibility: he can pass the same down to others he may deem fit. Let all IAS Officers earn their paid holidays in Goa. So, what action must he take? He must decide after meeting all concerned, doctors, maklatdars, etc, and analyse facts.
Is it the elderly people who succumb? Or the comorbid ones? Then pass appropriate orders. The elderly must wear N95 masks and restrict movement outside the home. Their families must restrict their outside contacts. Ensure they get a proper immunity booster: Vitamins D, C and zinc. If required, check all above 60 years plus for vitamin D levels or ensure they get a daily dose of the sun. Make a daily regimen. Also publicly announce the easy availability of vaccines and whether it is free or how much is to be paid.

Objective No2 would be to ensure a better quality of life for recovered contagion warriors. At various meetings analyse the health of recovered patients, because we know that many still suffer lung damage and heart problems. Many may be in need of oxygen therapy, make it easy for them to get it. Screen those with high pressure vis-a-vis Covid-19.
Objective No3 would be to set a target date for completion of vaccination for all health workers. Target must be to utilise 95% of availability. Crash the date: what is required? Vaccine administrators? How do we increase the number? Training new people? Who will train? Or, requisition all private doctors and nurses to compulsorily provide four hours of duty daily. The IMA has done practically nothing for pandemic needs. Consider home vaccination as an achievement.
Objective No.4 would be to set a date for completion of vaccination for the general public. Make a written paper classifying different categories of people. Those that need to be observed after the first shot must have adequate arrangements made. Again the target date must be based on the number of administrators available. After the first date arrived at, consider crashing the same to half the time. What additional resources are required? Nurses? Make a plan, execute and monitor. Decide with the doctors may volunteer and train them.
Currently it seems to be like everything is working in the air, that is not working. The pandemic is a national calamity and must be treated as such, on a continuing war footing. But sadly, elections are a priority! Goa’s villagers should refuse to vote until their roads are streamlined and tarred in a public-friendly way! Voters need to get their priorities right, do it now.
— R Fernandes, Margao

GOVERNMENT ILLEGALITIES
IN the last over 40 years raising issues against the illegalities of successive governments has not been an easy task. Truth hurts but it is only truth that will always ultimately prevail. In the issues that I have raised over the years, it has never been personally against individuals but the wrongdoings of those in power, regardless of which party has been ruling.
We should never compromise or surrender our fundamental right to speak out openly and candidly against anything that is wrong. Politicians and people in authority should to be ready for both bouquets and brickbats. They should know that their deeds and misdeeds are always under the public scanner and likely to be exposed sooner o later.
To fight fearlessly against social ills is the very hallmark of any true democracy. Unfortunately, some ride to power on a contrived mandate and are unable to withstand any scrutiny. We are currently witnessing respect and tolerance towards the power of Opposition and a weakening Opposition is a very disturbing trend for the world’s largest democracy! In a democracy the well-being of our people and the country must always be paramount.
We must be committed to battle any undue harassment by the government of the day. We need to keep this fighting spirit alive for the sake and welfare of our fellow citizens. The well respected Martin Luther King said, “There comes a time when one must take a position that is neither safe, nor politic, nor popular, but he must take it because the conscience tells him it is right. Our lives begin to end the day we become silent about the things that matter. To ignore evil is to become accomplice to it. In the end we will remember not the words of our enemies but the silence of our friends. The ultimate measure of a man is not where he stands in moments of comfort and convenience but where he stands at times of challenge and controversy.’’
— Aires Rodrigues, Ribandar

CHINA STALLING!
WHEN the World Health Organization (WHO) team investigating the origin of coronavirus stated that it was “extremely unlikely” that the Wuhan Virology Institute was the source of origin of the virus and led to the deadly pandemic, China thought that it had got away from owning responsibility for the original outbreak. The WHO team, however, had also suggested that the virus was an animal to human transmission.
But later the Chinese authorities refused to give WHO raw data, meaning details of the first 174 cases that originated in the wet markets of Wuhan, end third week of December 2019 to the beginning of the fourth week of December, 2019, at which point the outbreak was first reported in China. Because WHO was seen as protecting or favouring China, former US President Donald Trump suspended funding to the WHO. Now WHO itself has not been getting sufficient cooperation from the Chinese authorities. It definitely suggests that China has something to hide.
As far as the rest of the world is concerned, the confirmed infections and fatality rates worldwide make for very grim reading. Johns Hopkins University data reveal that there are 108 million confirmed cases of infections and 2.39 million deaths due to Covid-19 across the globe. The countries worst affected are: United States (27.6 million infections and 4,84,400 deaths), Brazil (9.77 million infected and 2,37,000 deaths), India (10.9 million infected and 1,56,000 deaths), United Kingdom (4.01 million infected and 1,16,000 deaths), Italy (2.7 million cases of infection and 93,045 deaths), Russia (4 million infected and 77,911 deaths), Spain (3.06 million infected cases and 64,747 deaths).
In light of this unprecedented tragedy in the world which has disrupted normal lives, caused untold misery and suffering to the people across the world and severely affected the economy throughout the globe, it is the duty of every country to exert pressure both diplomatic and through economic sanctions on China — to make it accept responsibility for the origin of the coronavirus.
— Elvidio Miranda, Panaji