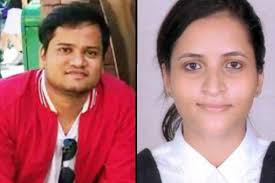 RAMPAGE: The Delhi police has been going on a rampage arresting several climate change activists on the grounds that they are associated with the toolkit leaked by Swedish teenager, the Nobel prize winning Greta Thunberg. The latest against whom the arrest warrant has been issued are two young environment activists from Maharashtra, Nikita Jacob, 29, a lawyer with the Bombay HC and Shantanu Muluk, 31, an aerospace engineer turned climate activist.

Leading lawyers including former Chief Justice of the Bombay High Court Pradeep Nandrajog, pointed out that charge of sedition “contemplates use of force in over throwing of a government established by law. It requires incitement of violence as held by the SC…but what is important is the scale of such violence.” Legal experts belief that the arrest of the young activist Disha Ravi was unwarranted. “There is no doubt in my mind, no question of invoking section 124A relating to sedition in the Disha Ravi case.”

Here we will tell you about the Sedition law as a whole. The use and misuse of Section 124A of IPC have been a subject of public debate for a very long time in India.
In recent times, there has been an increase in the instances in which sedition charges were pressed against intellectuals, human rights activists, filmmakers, university teachers, students, and journalists.

The Indian Penal Code defines sedition (Section 124A) as an offence committed when “any person by words, either spoken or written, or by signs, or by visible representation, or otherwise, brings or attempts to bring into hatred or contempt, or excites or attempts to excite disaffection towards the government established by law in India”.
Disaffection includes disloyalty and all feelings of enmity. However, comments without exciting or attempting to excite hatred, contempt or disaffection, will not constitute an offence under this section.

Punishment for the offence of sedition

• Sedition is a non-bailable offence. Punishment under the Section 124A ranges from imprisonment up to three years to a life term, to which fine may be added.
• A person charged under this law is barred from a government job. They have to live without their passport and must produce themselves in the court at all times as and when required.
Origin of sedition law in modern India
• The law was originally drafted in 1837 by Thomas Macaulay, the British historian-politician, but was inexplicably omitted when the IPC was enacted in 1860.
• Section 124A was inserted in 1870 by an amendment introduced by Sir James Stephen when it felt the need for a specific section to deal with the offence. It was one of the many draconian laws enacted to stifle any voices of dissent at that time.

Arguments in support of Section 124A:

• Section 124A of the IPC has its utility in combating anti-national, secessionist and terrorist elements
• It protects the elected government from attempts to overthrow the government with violence and illegal means. The continued existence of the government established by law is an essential condition of the stability of the State
• If contempt of court invites penal action, contempt of government should also attract punishment
• Many districts in different states face a Maoist insurgency and rebel groups virtually run a parallel administration. These groups openly advocate the overthrow of the state government by revolution
• Against this backdrop, the abolition of Section 124A would be ill-advised merely because it has been wrongly invoked in some highly publicized cases
Arguments against Section 124A:
• Section 124A is a relic of colonial legacy and unsuited in a democracy. It is a constraint on the legitimate exercise of constitutionally guaranteed freedom of speech and expression.
• Dissent and criticism of the government are essential ingredients of robust public debate in a vibrant democracy. They should not be constructed as sedition. Right to question, criticize and change rulers is very fundamental to the idea of democracy.
• The British, who introduced sedition to oppress Indians, have themselves abolished the law in their country. There is no reason, why should not India abolish this section.
• The terms used under Section 124A like ‘disaffection’ are vague and subject to different interpretation to the whims and fancies of the investigating officers.
IPC and Unlawful Activities Prevention Act have provisions that penalize “disrupting the public order” or “overthrowing the government with violence and illegal means”. These are sufficient for protecting the national integrity. There is no need for Section 124A.
The sedition law is being misused as a tool to persecute political dissent. A wide and concentrated executive discretion is inbuilt into it which permits the blatant abuse.
In 1979, India ratified the International Covenant on Civil and Political Rights (ICCPR), which sets forth internationally recognized standards for the protection of freedom of expression. However, misuse of sedition and arbitrary slapping of charges are inconsistent with India’s international commitments.

The disutility of the sedition law:

• The data released by the National Crime Records Bureau for the year between 2014 and 2016 reflect the disutility of the law for the criminal justice system.
• Under the title ‘offences against the State’ the report shows a total of 179 arrests for sedition. However, no charge sheets were filed by the police in over 70% of the cases, and only two convictions during this time period. This data belie the claim for retaining the Section 124A of IPC.

What is the viewpoint of the Law Commission of India?

• In August 2018, the Law Commission of India published a consultation paper recommending that it is time to re-think or repeal the Section 124A of the Indian Penal Code that deals with sedition.
• In its 39th Report (1968), the Law Commission had rejected the idea of repealing the section.
• In its 42nd Report (1971), the panel wanted the scope of the section to be expanded to cover the Constitution, the legislature and the judiciary, in addition to the government to be established by law, as institutions against which ‘disaffection’ should not be tolerated.
• In the recent consultation paper on the sedition, the Law Commission has suggested invoking 124A to only criminalize acts committed with the intention to disrupt public order or to overthrow the Government with violence and illegal means.

Sedition law and the stand of Supreme Court of India

The constitutionality of sedition was challenged in the Supreme Court in Kedar Nath Vs State of Bihar (1962). The Court upheld the law on the basis that this power was required by the state to protect itself. However, it had added a vital caveat that “a person could be prosecuted for sedition only if his acts caused incitement to violence or intention or tendency to create public disorder or cause disturbance of public peace”.
The court held that “a citizen has a right to say or write whatever he likes about the Government, or its measures, by way of criticism or comment, so long as he does not incite people to violence against the Government established by law or with the intention of creating public disorder”.
In September 2016, the Supreme Court had reiterated these necessary safeguards and held that they should be followed by all authorities.
Sedition laws in international jurisdiction

• The United Kingdom deleted the seditious libel through the Coroners and Justice Act, 2009.
• In Australia, following the recommendations of the Australian Law Reform Commission (ALRC) the term sedition was removed and replaced with references to ‘urging violence offenses’.

India is the largest democracy of the world and the right to free speech and expression is an essential ingredient of democracy. The expression or thought that is not in consonance with the policy of the government of the day should not be considered as sedition. The Law Commission has rightly said, “an expression of frustration over the state of affairs cannot be treated as sedition”. If the country is not open to positive criticism, there would be no difference between the pre- and post-Independence eras.
Of course, it is essential to protect national integrity. Given the legal opinion and the views of the government in favour of the law, it is unlikely that Section 124A will be scrapped soon. However, the section should not be misused as a tool to curb free speech. The SC caveat, given in Kedar Nath case, on prosecution under the law can check its misuse.
Coutersy:www.indiantoday.in