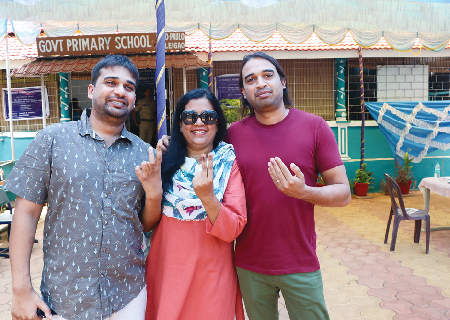 DYNASTY: Goan politicians seems to be following the example of the Nehru Gandhi family which is considered the classic example of dynasty politics.

Not content with having got his wife Jennifer Monserrate elected as Member of the Legislative Assembly from Taleigao, and himself representing the Panaji assembly constituency, it is rumoured that the Taleigao strongman wants to make his son Rohit Monserrate the Mayor of Panaji…..

DYNASTIC rule used to be confined to elections to Parliament and the Legislative Assembly. It has now at least in Goa spread to the Municipal civic elections too. Panaji MLA Babush Monserrate, originally elected from Taleigao, first moved to Santa Cruz. He then got his wife elected to the Goa Legislative Assembly from the Taleigao constituency. Babush who won the bye-elections to the Panaji Legislative Assembly has also controlled the Corporation of the City of Panaji for the last two terms. There used to be a fight between the BJP and the Babush panel for control of the CCP.
Now that Babush is a BJP MLA he has struck a deal whereby he would select the candidates. Not satisfied with his wife being Taleigao MLA, he now wants to make his son Rohit Monserrate the next mayor of Panaji! There are of course other sons also in the fray. Though Yatin Parekh was not given a ticket, his son Karan Yatin Parekh will be contesting for the election. Even though Babush has made it clear that the present Mayor Udhay Madkaikar will not retain his position, he has been given a ticket.
Dynastic succession is not rare in Goa. But sons, daughters and wife in other assembly constituencies have not been as successful. Churchil Alemao has tried repeatedly to get his daughter Valanka elected to the Legislative Assembly without success. Similarly Ravi Naik is keen that his son should get the ticket for the civic elections and should be appointed mayor of Ponda. The only son who has succeeded in getting into the assembly and even becoming a minister is Vishwajit Rane, son of Pratapsingh Raoji Rane.
Though the BJP may keep bashing the Congress as a dynastic party, it is not an exception in its own case. In many cases when seats have been refused to the sitting MLA, the daughters or sons have been accommodated. When Pramod Mahajan, a leading BJP leader, was killed allegedly by his own brother, his daughter Poonam Mahajan was given a seat to the Lok Sabha which she successfully contested. The senior most leaders may not have got their sons involved in politics. There is no question of a Modi dynasty as he seems to have cut off links with his family except for the occasional visit to his mother.
However Amit Shah has got his son Jay Shah appointed as the secretary of the Board of Control for Cricket in India. Another mother and son team in the BJP are Hema Malini, who is a member of the Rajya Sabha, and her stepson Sunny Deol who was elected from the Gurudaspur constituency as Member of Parliament.

OTHER parties in the country both at the national level and the state level also are involved in dynastic succession. In Tamil Nadu the son of former Chief Minister Karunanadi, Stalin, has been elected as the president of the AIDMK. The trend of dynastic succession is more common in the south than the north of India. The major exception being Bihar. When the Chief Minister of Bihar Lalu Prasad Yadav was convicted in the fodder scam, he made his wife, Rabri Devi the chief minister. Now his sons are also members of the Bihar Legislative Assembly. His son Tej Pratap Yadav was a minister in the previous Bihar government.
In the case of the Congress party unfortunately the top leadership set the bad precedent of converting the Congress party into a monopoly of the Nehru Gandhi dynasty. The first prime minister of the country was Jawaharlal Nehru. Though he was not immediately succeeded by his daughter Indira Gandhi. Lal Bahadur Shastri took over from Nehru after the latter’s death. But Shastri himself did not hold power for long as he died in mysterious circumstances in Tashkent in the than Soviet Union where he had gone to sign the agreement on the Indo-Pak war.
But on Lal Bahadur Shashri’s death Indira Gandhi manage to manipulate the party into making her the prime minister. Indira Gandhi continued as PM till the Allahabad Bench of the Uttar Pradesh High Court disqualified her on charges of corrupt electoral practises. Under the instigation of her younger son Sanjay Gandhi she refused to resign and instead declared the Emergency in June 1975. In the elections held 18 months later when she lifted the Emergency the Congress party was defeated. There were a series of short lived coalition governments which did not lost long.

IN the general elections in January 1980 Indira Gandhi returned to power with a thumping majority. Unfortunately for her she was assassinated by her own Sikh personal bodyguard within the compound of her residence in 1984. This was in retaliation for her decision to send the army into the most sacred shrine of the Sikh community the Golden Temple in Amritsar. Operation Blue Star which cost her life was carried out as the Golden Temple had been taken over by terrorists led by Jarnail Singh Bhindranwala, who was demanding a separate Sikh country, Khalistan.
The climate change activist Disha Ravi, and the two other activist from Maharashtra Nikita Jacob and Shatanu Muluk, have been arrested on the charge of sedition for being associated with the group of Sikhs who still want a separate Khalistan. Such was the hold of Indira Gandhi on the Congress party then, that senior leaders insisted that her elder son Rajiv Gandhi should succeed her as prime minister. Rajiv was very reluctant but had no choice as there was pressure from the party. Besides, his younger son Sanjay Gandhi who had political ambitions, had died in an air crash.
But tragedy continue to follow the Nehru Gandhi family. It needs to be clarified that Indira and sons and grandson Rahul are not in any way related with the family of Mahatma Gandhi. They bear the name Gandhy as Indira was married briefly to a Parsee, Feroz Gandhy. Gandhy became Gandhi and Rajiv Gandhi made a mistake of sending Indian troops to Sri Lanka to fight the Tamil terrorist group in the neighbouring country. This was disastrous as Rajiv Gandhi was killed in a terrorist attack in Chennai after he addressed a public meeting in connection with the forth coming general elections. The garland which a Sri Lankan women terrorist offered Rajiv Gandhi had a powerful bomb.
Following the assassination of Rajiv Gandhi, though there was pressure on his wife Sonia to take his place as prime minister she refused. In the elections that followed there were a serious of coalition governments culminating in the BJP community in power under Prime Minister Atal Bihari Vajpayee. However following the withdrawal of support by the DMK the BJP government fell. Sonia Gandhi returned as Congress president. The party won the next general election but Sonia Gandhi declined the office of prime minister and chose to appoint Manmohan Singh. However, Sonia is still keen that the dynasty should continue and she has been trying very hard to persuade Rahul Gandhi to take over the reins of the Congress party.

WE have to fight the tendency to convert politics into a family affair. Even if sons and daughters of politicians want to contest elections they should earn the right to represent the people. It is dynastic politics which denies good candidates a chance to enter politics. Uday Bhembre, who was elected as MLA, did not get a second term as he was not willing to be a party to corruption.
Similar is the case with former Chief Justice of the Allahabad HC Ferdinho Rebello who was elected for one term on the Janata party ticket. Amongst the best MLAs Goa has seen is Radharao Gracias who was elected on the United Goans Democratic Party.
In conclusion to the dynastic story it seems impossible for newcomers to challenge the MLAs and especially those who have taken a leaf out of Babush Monserrate’s book and invested in building strong vote banks of migrants and minority communities who are gifted with a slew of aid like paying children’s education fees, housing facilities, loan payment on motor-bikes for young men and bicycles to women and many other ways to make sure once a voter always a voter for godfather general.

Several prominent citizens of Panaji who have come together to fight against the panel floated by Atanasio Monserrate and BJP in the CCP election on March 20 are drawing spontaneous support from residents across the city.
Former Mayor Surendra Furtado has been nominated as Convenor, while outgoing corporator Menino da Cruz, lawyer-activist Malisa Simoes, sports administrator and RTI activist Sandeep Heble, lawyer and former corporator Suresh Chopdekar, Lawyer / activist Adv Pundalik Raikar and youth leader Sayad Saquib khadri have been nominated co-convenors of ‘We Ponjekars’.
The team of ‘We Ponjekars’ asserted that within the next few days they will announce the names of candidates in all the 30 wards of CCP.
There is strong resentment brewing against the political machinations and manipulations indulged in by Mr Monserrate and the powers that be to take control of CCP. The support of the people has further strengthened the resolve of this citizen initiative to fight the CCP polls.
A team of ‘We Ponjekars’ is working on a five-year deliverable plan for the city covering intra-city traffic mobility driven by public transportation with e-vehicles, garbage management, revitalisation of perennially neglected water bodies particularly St Inez and Rua de Ourem creeks and the Mala Lake, resolution of the murky Market scam and the confusion there, Health Centre and Football ground at Ribander besides several other neglected local issues from across our city.
The documented plan will also have a signature project to spruce up the Massano de Amorim square respecting its Heritage value and taking back the lease expired National Theatre property.
‘We Ponjekars’ vision document will also include a sub-plan to revive the NGPDA market project which is at a standstill for over a decade and will be released at the start of our city-wide campaign.
‘We Ponjekars’ are open to suggestions from well-meaning citizens of Panaji including professionals such as engineers, lawyers, doctors, teachers, architects, engineers and consultants giving practical solutions to many of Panaji’s perennial problems which may be emailed to weponjekars@gmail.com by march 5.