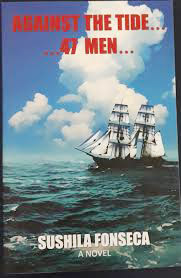 Goan history is so excitingly educative! I’ve just been reading Dr Sushila Fonseca’s book ‘Against the tide…47 men’ which is eminently worth catching up with one of these days. If you’re interested in a story full of insight into how history happens. Here is a novel without superfluous frills but effectively dramatized and it is based on historical facts…at least we in Goa should read it. And for that matter so should travelers or tourists interested in understanding the country’s smallest state Goa. So different from all the other states!
Goa after all has a fascinating history against a backdrop of 450 years of Portuguese colonial rule before it was liberated by Goan and Indian forces in 1961. A lot of energy was expended at that time about whether Goa should or should not have been liberated! Many said India should not have “invaded” Goa and many more in Goa itself said it was time Goa was liberated from Portugal’s rule and misrule and so it happened long before 1961 closer to our times!

Here’s a dramatic recounting telling of how the Goan seeds of rebellion and aspiration for freedom were sown in writer and novelist Dr Sushila Fonseca’s evocative latest book, although it came out in 2019 but perhaps needs to be better noticed and reviewed! Not only non-native Goans but tourists seeking insight into a more rewarding life and times of Goa past and present should read up this novel written by a skillful writer.
Dr Sushila Fonseca, a practicing pathologist in Panaji, has a keen eye of observation and must have done a formidable amount of research to set her novel after some 200 years of Portugal’s colonial rule, a time when the winds of change were sweeping through the Western world influenced by such influential men as Voltaire, Diderot, Abbe Sieyes. If Europe was discovering the principles of liberty, equality and fraternity, so was the educated native clergy of Portuguese Goa or Portuguese India as some referred to it in those long years of old.
Funny or not funny. How the Portuguese white clergy considered itself superior and sort to keep its converted brown native clergy suppressed and exploited! But then conversion has its flip side and advantages – the wealthier lot travelled for business or pleasure from Portugal to Goa and vice versa and had homes and friends in both Europe and Goa. This educated segment took stock of the American war of independence from British colonialism and how things were on a boil for freedom from tyranny in Europe too.
So naturally back in Goa they wanted freedom from the tiresome Portuguese yoke too…why not freedom from the oppression of the Portuguese whites only dominated Church of the times? So we have key protaganists in the novel, namely friends in Lisbon and Goa who were undoubtedly fans of the European freedom movement and wished it would come to Goa far out in the Indian sub-continent too which was fermenting into an independence fight!

FIRST BLOW
Most Goans today may or not have heard of the first blow for freedom – the Pinto Revolution — which was squashed most brutally when squealers informed on the wealthy clergy homes which sought more freedom from racialism and oppression in the Church hierarchy …Sushila Fonseca’s novel brings this bit of history come alive most vividly. Get a glimpse of all that led to further protests against whatever divisions happened in Goa from then onwards…of course this is a novel with a historical context and all the more readable for those who have a yen to understanding history further.
Quite simply because if we do not learn from history we will not move forward at all into a civilization which swears by a democracy of equality and fraternity. Say this is a cameo novel easy to read and yet thought-provoking. We have this brotherhood of Vitorino, Jose, Joaquin, Narcise, Antonio, Custodio…some of them family members and friends across Goa of those colonial times, getting together in Lisbon to discuss the evils of their motherland Goa (if Portugal was fatherland Goa was motherland for the converted).
To quote one Custodio (Vitorino’s son, a family dedicated to the priesthood), “To be more precise, it’s about how we, the natives of Goa, experience racist discrimination not only in Portugal, our so called Fatherland, but even in Goa, our own dear Motherland!” It’s a fascinating story of racial discrimination in Goa between the native converted community and the ruling clergy and nowhere was this more evident than in Church hierarchy vis-à-vis the priesthood and nunneries which came up in Portuguese India…indeed, Christianity preached equality but there was none of that in the Church itself! The Church paid an important role in the politics of those times for it was after power and pelf too.
The author brings this out in piquant detail in her novel based on the Pinto Revolution of 1785 in Goa when 47 revolutionaries were charged with treason against Portugal’s queen. There are not many niz Goenkar doctors who engage their free time writing for pleasure and leisure but Dr Sushila Fonseca is one of them! Make time to read `Against the Tide…47 Men’ one of these days. The delicious irony we have here is that the local Catholic community aspired for justice and freedom long before the more stoic local Hindu community did closer to out times. There’re surely several moral lessons in this historical saga to appreciate and learn from.

Excerpted from ‘Against the Tide… 47 Men’ by Sushila Fonseca

In Ponje, early on the morning of August 6, the State Secretary rushed to meet the Governor General of Goa.
“Your Excellency,” he said, “I’m not sure about the significance of this information but I thought it prudent to report it to you, personally.”
The Governor raised his head languidly, from the book he had been immersed in. He cocked an eyebrow and gazed at the Secretary, exasperation written on his face.
“I’m sorry to disturb you, Excellency, but it appears to be very important and urgent.”
“Get on with it, then. Tell me about this fantastic information you have,” said the Governor.
“It’s this report for Colonel Mira from the Legion of Bardez, Your Excellency.”
“Get on with it, then!”
The Secretary took a deep breath and said, “He reports that a certain Lieutenant Nicolao Costa confessed to him that he was involved in a plan to revolt against her royal majesty’s government of Portugal.”
The Governor General shut his book with a thud and sat upright. “That’s odd! Earlier today, the Archbishop came over to tell me that some priests reported to him their concern about an impending revolt. It must be true, then he told me that a couple of priests have returned from Europe, with some new fangled ideas of freedom. He said, one priest, in particular, called Jose Antonio Gonsalves, is the ring leader. We can’t afford a rebellion at present and certainly not in the military! Not in the Legions! The rascal Nawab Tipu Sultan, is at our border. He’ll take advantage of any sort of unrest in Goa. We’ll easily be overwhelmed. We can’t have any trouble, especially these days, when we’re short of troops! If there’s any truth in it, we must abort this revolt immediately!”
“How should we go about it?”
“Take them by surprise! Put them all inside the prisons before they even know what’s hit them. Get hold of the ring leaders first! Archbishop said that the revolt will probably be in a few days! Make a list of those traitors and put them all in the lock up immediately. Don’t give them time to communicate with each other.
“Put only our Portuguese soldiers on the job! Our white men! Do you understand” You can’t be sure of the loyalties of the Goan natives. They promise one thing and do exactly the opposite! They’re dirty rascals! Take all of them in at once. Those are my orders! Get hold of that demon priest, Gonsalves, first!” He rummaged through a pile of papers on his table and withdrew a tattered paper. “Here, take this list of names the Archbishop gave me, it’ll help you get them. Don’t forget! Catch all the rascals wherever they are, from North to South Goa, and lock them up!”
“Yes, Excellency! I’ll issue the orders at once!”
“Good! Issue a declaration, which I’ll personally sign. It must state that the planned revolt is a crime of the highest order, which means that the punishment will be of the severest!” Red faced, the Governor General paused to take a breath. He tapped his fingers on his desk and continued, “Oh! There’s one more thing and it’s most important! The priest must be handled with respect. We don’t want the Pope complaining from Rome to the Queen about ill treatment meted out to his priests. It may land us in more unnecessary, nasty political problems! You understand, don’t you?”
“Yes! Yes, Excellency!” The Secretary replied and departed in haste.

WHAT WAS THE PINTO REVOLUTION?

THE Pinto Revolution or the Pinto Conspiracy was the scene of the first serious local attempt to overthrow the Portuguese in Portuguese India, namely Goa. It’s main planning started in various clergy homes in Goa with the main meeting point being at the Pinto family home in Candolim in Goa. The founders of the conspiracy were mostly Goan clergy angry about the ingrained racial discrimination going on in the Church of Goa whereby native clergymen were not allowed to rise to the highest positions like being the Archbishop no matter how well they were qualified.
Two of them, namely Father Caetano Francisco Couto and Jose Antonio Gonsalves travelled to Portugal to plead their case in the court in Lisbon but failed to get any justice in this matter. They returned to Goa and influenced by the spirit of liberty and equality going on in Europe they plotted to lead a revolution to overthrow the Portuguese government in Goa.
The number of conspirators grew with some in the army joining in, many of them disgruntled by the suffering caused by overbearing Portuguese overlords. The plotters almost succeeded but for the fact that some of them decided to squeal to the Archbishop and Governor General of the times. The proposed coup came to a tragic end. The Portuguese authorities read any talk of freedom as treason against the Queen of Portugal and cracked down on the conspirators most brutally and savagely.
A total of 47 people were caught and imprisoned. Fourteen were priests and these included the chief rebel Father Caetano Francisco do Couto and Joao Baptista Pinto, 12 soldiers among which one was captain, four lieutenants and the rest corporals. Amongst the latter was Manoel Caetano Pinto of Candolim, lieutenant of the Ponda legion, his cousin Manoel Pinto of Saligao, a civilian. One sole Hindu, Narba Naique, the Dessai of Ponda was also put in prison.
After lengthy trials some were sentenced to the galleys or deported to Portugal for a 20-year prison sentence, while 15 of the unluckiest and lowly were hanged, drawn and quartered in Panaji, with heads of some of the “traitors” or justice seekers (depending on how you perceive it) chopped off, mounted on stakes and propped up in public to serve as a deterrent to other would be revolutionaries. After 18 years in prison some priests were freed and returned to Goa to tell their story to their countrymen and the world. Ringleader Father Caetano Francisco do Couto, it is said, feigned lunacy when he was interrogated and was sent to the convent of S Francisco da Cidade, for medical surveillance and finally interned in the tower of S Juliao da Barra. Such is the fascinating history of Goa, colonial times, which lasted for more than 450 years.