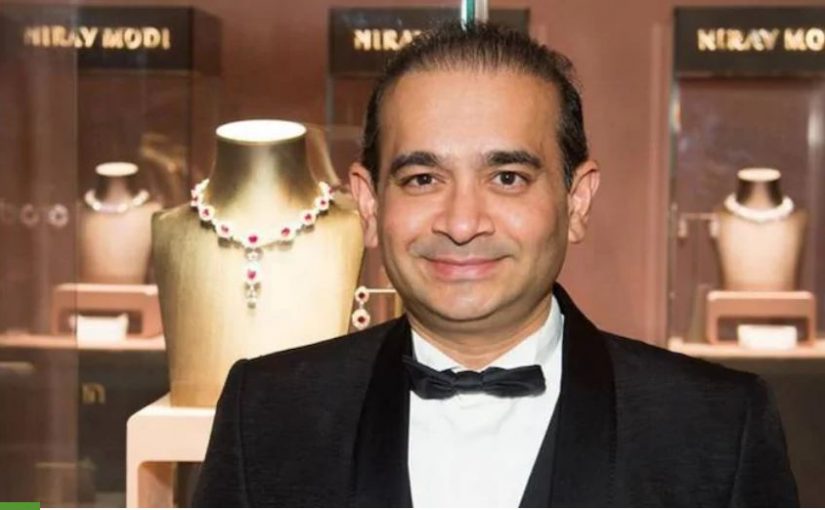 FLAMBOYANT: Nirav Modi, who has lost his case to stay back in the UK, is considered one of the most reputed diamond dealers, having come up with unique designs. Nirav even had a fashion show where the models were attired only in flowers and diamond jewelry

Diamond Emperor Nirav Modi, who is alleged to have cheated the Punjab National Bank of over Rs1 4,000 crores, is being sent back by the UK to stand trial in India…..

District Judge Samuel Goozee ruled that Modi had conspired to destroy evidence and intimidate witnesses.
A UK extradition judge on Thursday, 25 February, ruled that fugitive diamantaire Nirav Modi, wanted in the 14-crore Punjab National Bank (PNB) scam can be extradited to India to stand trial, reported ANI.
Reacting to the order, the Ministry of External Affairs later in the day said that the government of India will liaise with UK authorities for his early extradition.
The judge, who had said that Modi has a case to answer for in India, said that the jeweller would not be denied justice if he is extradited to India.

What Did the Judge Say?

The judge further stated that Barrack 12 at Mumbai’s Arthur Road Jail is fit for Modi, and dismissed Nirav Modi’s “mental health concerns”, saying that they are not unusual considering his circumstances, ANI reported.
The diamantaire will be given adequate medical care and mental health support at Arthur Road jail, the judge added, stating that thus there is no risk of suicide.
The UK judge also dismissed Modi’s defence, which claimed that Law and Justice Minister Ravi Shankar Prasad attempted to influence the case against the billionaire, ANI reported.
The court also said that it was satisfied there is evidence that Modi could be convicted and that there were clearly links between him and other connivers including officials of PNB, reported NDTV.
“Many of these are a matter for trial in India. I am satisfied again that there is evidence he could be convicted. Prima facie there is a case of money laundering.”
District Judge Samuel Goozee

The Case Against Nirav Modi

The 49-year-old Modi had appeared via video conferencing from the Wandsworth Prison in south-west London at the Westminster Magistrates’ Court for the verdict in the nearly two-year-long battle. He has so far been denied bail despite multiple attempts, as he was deemed a flight risk by more than one court, reports News18.
Modi and his uncle, Mehul Choksi, are the main accused in the PNB scam and they both left India before the details of the fraud came to light in January 2018. Modi became the second businessman after Vijay Mallya to be declared a fugitive economic offender under provisions of the new Fugitive Economic Offenders Act, which came into existence in August 2018, reports PTI.
Modi, who was arrested on an extradition warrant on 19 March 2019, is the subject of two separate sets of criminal proceedings, one a Central Bureau of Investigation (CBI) case relating to a large-scale fraud upon PNB, and another, an Enforcement Directorate (ED) case relating to the laundering of the profits of that fraud.