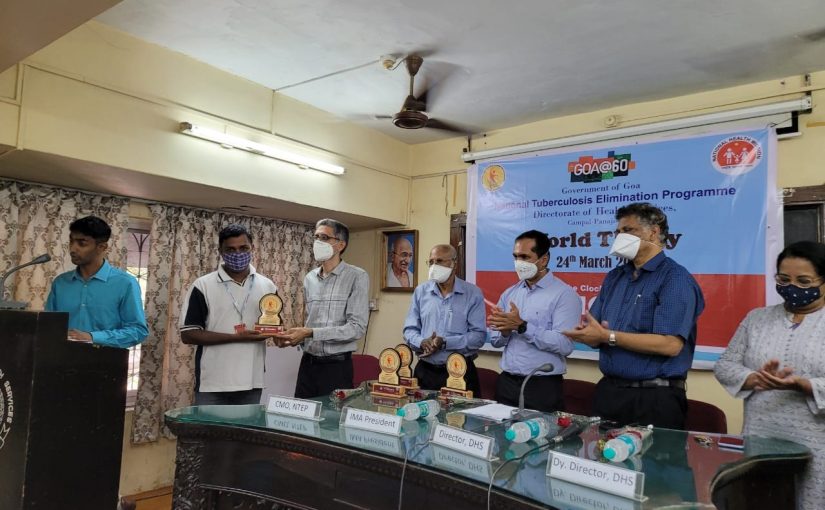 The Human Touch Foundation observed World TB Day (March 24) in collaboration with Primary Health Centre (Cortalim) and Kiran Niketan (Zuarinagar) to raise public awareness about the devastating health, social and economic consequences of tuberculosis which is a global epidemic. Dr Satish Pednekar spoke on signs and symptoms of tuberculosis and briefly detailed the RNTCP programme of the government. Present for the occasion were Sr Philesine, Dr Poornima Shirodkar, Dr Peter F Borges (founder, Human Touch) and others. This year’s theme for TB control is `The Clock is Ticking.’ The event was attended by about 15 TB patients and general public. Human Touch provides nutritional support to around 50 adolescents and youth with TB all over Goa.

IT has been reported that the total amount of NPAs that public sector banks (PSBs) for FY21 are incurring is a whopping Rs5.77 lakh crore (yes, that is Rs5.77 trillion)! Why is that economic offenders cannot be brought to book even though they have defaulted in paying back huge sums of money borrowed by them? Why have they still escaped the punctured dragnet of the legal system? Examples: Vijay Mallya, Nirav Modi, Mehul Choksi and Lalit Modi (the conveniently forgotten BCCI president) are stark reminders of people in big businesses who have looted the banks and the savings of the honest hard-working people of this country.
How dare banks sanction them loans without attaching a proportionate amount of their assets to make recovery if they default on their loans? Banks should be able to recover money from defaulters no matter who their friends up there in the offices of power. Thanks to the massive loot by the privileged classes the banks are now bleeding with staggering amount of losses.
How many other big businessmen are going to escape the ambit of the law in this country? Are other smart borrowers being held accountable as well as the complicit bank top brass who enabled the looting of the banks and impoverishing the country? Recently, drug smuggler Kishan Singh was been extradited from UK to India to face charges and other economic offenders are stalling extradition by making use of their ill-gotten gains and resorting to legal spin craft — hiring expert economic offences defence lawyers, who manage to hold at bay their extradition using legal sleight of hand.
Will all these offenders be forgotten with time or will they face legal action when they reach their old age, only because they can outlast the legal system with their borrowed money? Can the country afford such colossal losses by banks which are in serious trouble after their reduced profitability and loss of trust in the eyes of the ordinary people of this country? Like West Bengal Chief Minister Mamta Banerjee said not so long ago, India is in the grip of an “economic emergency.”
— Elvidio Miranda, Panaji

ALL IN THE DARK!
POLITICIANS were demanding that the results for the recent polls in Goa should be held back till all municipal elections were complete. The reason being that the results may tilt the voting for the balance constituencies. Actually, the declared results exposed the sinister manoeuvres of seasoned politicians giving a chance to voters to pay back in kind at a very early date.
The Navelim Zilla election resulted in the key Congress contestant losing! The seasoned MLA from that constituency is supposed to have scuttled the candidate. A UGDP leader says “young upstarts”
must think twice before throwing their hat in the domain of a seasoned politician! Yet, for public consumption, they all root for induction of young blood! Give our old outdated politicians a long rope and we see them in their true colours!
The MLA has his candidates in the Margao municipality too, one in Fatorda. People may now decide how to pay back in kind after duly studying the facts. Another NCP MLA says the candidate would have lost her deposit if in fact, the Navelim leader did not support her. In the same breath he says he will field his candidate for the assembly elections in Navelim! Strange. His candidate would stand a better chance if the rift was there: Why mend it? Or is it really mending something else?
The UGDP leader seeks to explain how the Panaji MLA keeps on winning. Note the detailed apple polishing: You can’t miss the agenda! He states that the said MLA told him people come to him to do their work which only he can do when in the government. So, this is how he wins: By doing peoples “work”? What is this work?
Every sample population follows a normal distribution: An inverted bell. If you take say, IQ, then the small curved portion on the left will be those with very low IQ, on the right, high IQ with the vast majority being in the middle “dome”
which depicts the average.
Now take the voting population of Panaji: The left part comprises the poor, the migrants. What do they want? Money for votes, legalising of their illegal shanties and encroachments, government, jobs, accommodation. Anything else?
On the right we have the casino owners who do not want to shift, who want their counter office built on pavements and roads, hold “pro” boxing matches violating all norms, the illegal builders who want to build with higher FAR than allowed and no setback, that too in fields, etc.
What do the vast “average” residents of Panaji want? The casinos to move out so that the roads get less cluttered, the river stopped from being further contaminated by casino visitors, pavements for pedestrian use only. In short, a better quality of life. He wins because he is able to do the work of all? Now this would require a magician!
Or a corrupt average population? Or a tweaking of the migrant population so that they now fall under the average part of the dome? Or is it that the right portion of the bell, which traditionally used to be a small portion, now become so large that they are now the new average? In that case Panaji is now like the haven for outlaws prevailing in the wild, wild west!
After all, it is the vast population falling under the average portion that must be the decisive votes. Time to change the capital of Goa back to Chandor.
— R Fernandes, Margao

ODF GOA?
THE Goa Government had the rank audacity to so deceitfully declare that Goa as Open Defecation Free (ODF) from August 31, 2019.
It’s almost two years down the road and the very sordid ground reality is there for all to see with people urinating and even defecating out in the open everywhere. In the hills, fields, along riversides, all across Goa. Along Goa’s riverside all the defecation goes into the waters where fish breed. With no sewage line in place many business release raw sewage through pipes into public drains.
This is an unacceptable situation. The onus is on the government to ensure that it is mandatory for every house to have a septic tank. This is required to ensure that no health epidemics occur.
Goa may be officially ODF on paper! But the truth is that even the Porvorim slopes just below the government secretariat are used by hordes of labourers for their ablutions. Across the road we see laborers working at the construction site of our new high court building which is scheduled for inauguration on March 27…they continue to merrily answer nature’s call all over the place!
Does anybody remember that the law requires labour contractors to provide proper toilet facilities for their workers? It is also not uncommon seeing tourists on arrival urinating around bus terminal corners due to agreeable toilets. This is the sorry state of affairs in many government offices too.
In rank violation of law many housing complexes are brazenly releasing sewage into the fields. There is a dire need for proper public facilities to be set up on state highways.
We are far from truly becoming ODF and the government needs to get its act together to achieve this goal in the larger interests of the state of Goa. For Goa to be Open Defecation Free we would have to first free ourselves from the stench of rampant corruption and lack of any real governance in the state of Goa.
The people are not fooled by facts and figures deviously released by the government! In the book of good governance there must be no room for lies and deceit. Transparency of good governance has to be the order of the day at all levels and times!
— Aires Rodrigues, Ribandar