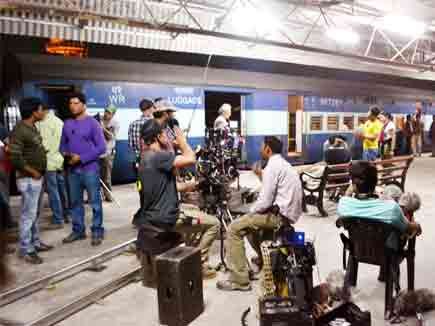 ARAM NAGAR: Those working for the film industry have no jobs and no alternatives to live in aaram in Aram Nagar.

The freeze on new shootings and the release of new films for over a year has deprived several lakh people working in junior positions in the film industry, for example, assistant directors, light and spot boys, sound assistants, who basically live from hand-to-mouth in the semi- slum colonies of Adarsh Nagar in Versova in Mumbai. Those who make TV serials and act in them are also affected by the Covid-19 lockdowns….

THERE have been ups and downs in the history of Bollywood, but never have the downs been so terrible and Bollywood seems to be standing at a crosswords where it seems like there is no point of return, unless a series of miracles happen in the world of dreams and more dreams.
It all started with the death of Sushant Singh Rajput under mysterious circumstances and to add to the mystery, there was misery unlimited and the repercussions have been following relentlessly. Bollywood seems to have been ripped apart with some of the most horrifying things like nepotism, drugs and other related malaises and the impact of all this is being felt more than ever now.
The death of Sushant Singh has seriously affected some of the leading filmmakers and the biggest stars. The constant attacks being made by the beautiful “outsider” Kangana Ranaut against the insiders has had such a nasty impact on some of the most powerful men and women around.
It was difficult to believe when found out how the three Khans — Shah Rukh Khan, Aamir Khan and Salman Khan — are living in fear, so many different kinds of fears. The fear of their films not being allowed to be released or if released the attacks they and their films would have to face. The Khans have a major stake in Bollywood with multiple crore rupees being invested in their names. All the three Khans have big films slated for release in the coming months.
Shah Rukh who had no releases for the last three years is now fighting a battle to find his place at the top again with a film called Pathan.’ It is considered to be the most expensive and eagerly awaited film, but the atmosphere around the studio where Shah Rukh is shooting for the film looks like a battle ground with the security being tighter than the security for even one of the big leaders. When last heard of the team behind the making of the film were even thinking of changing the title because it felt that the present title could affect the film and also Shah Rukh under the circumstances today. Salman has a big film calledRadhe
The Bhai You Would Love.’ It may be remembered how Salman was targeted soon after the Sushant Singh case and in places like Bihar, people had threatened not to allow him or his film into Bihar. A lot of the future of Salman’s career depends on this one film he has on hand. And it is a very scary seen for Aamir Khan who has been in the eye of several storms during the rule of the present dispensation, starting with his talking about intolerance and his wife, Kiran Rao, asking him if it was not right for them to leave the country.
Aamir is now making his own film titled Lal Singh Chadda’ which is a take-off on the Hollywood film,Forrest Gump.’ In addition to all the other tricky and dicey situations he is caught in, the film is the story of a Sikh young man trapped in a net created because of his being a Sikh.
It is praiseworthy to see how these Khans are fighting it out even in the dark times they are facing, but within them there is the element of fear about the future. They are not taking any risks by speaking out about their circumstances because they are not sure about how what they speak may mean to people who have (whether they say it openly or not) a hidden or open agenda. The fear of the Khans is shared by many others, but like I said not many or no one wants to take any risks (fear and risk are closely related these days)
THE only man who has nothing to lose and still believes and lives as if he and his family have everything to lose is the star of the millennium, Amitabh Bachchan. And those who believe that they just don’t care are the names who are very close to the seats of power, Akshay Kumar, Ajay Devgn and Paresh Rawal (I don’t want to say anything about those who love sitting on the fence). In fact, Akshay Kumar, who is the most vociferous follower of the Prime Minister is right now shooting for a film so blatantly titled `Ram Setu’ and he is shooting in the heart of Ayodhya. And, of course, there is the darling of the flower party who can do what she wants to and get away with it.
And those who have dared to speak against the powers that be have seen proof of what can happen if they speak the truth. The most recent examples have been director Anurag Kashyap and actress Taapsee Pannu. They raised their voices in favour of the farmer’s protest. And what they received as “gifts” were days of investigations by the Enforcement Directorate, even though the ED couldn’t find enough to frame them with charges.
And to know the miserable and impoverishing conditions Bollywood is living in, one has to only make the rounds of places like Aram Nagar, Mhada, Adarsh Nagar, Ganesh Nagar and other slums. There are assistants, stand-up comedians, art directors, dance directors, technicians and the thousands of junior artists who have not found any work during the lock downs and are living a hand-to-mouth existence or even worse. They too like millions of Indians are waiting for the “achhe din” and the elusive Rs15 lakh.
What will be the future of Bollywood? As the god old song song goes, “Que Sera Sera.”

Mumbai-based Ali Peter John is a veteran film journalist, former Editor who worked for screen, the film weekly of the Indian Express Group, for over 40 years, and has seen the highs and lows tinsel town.