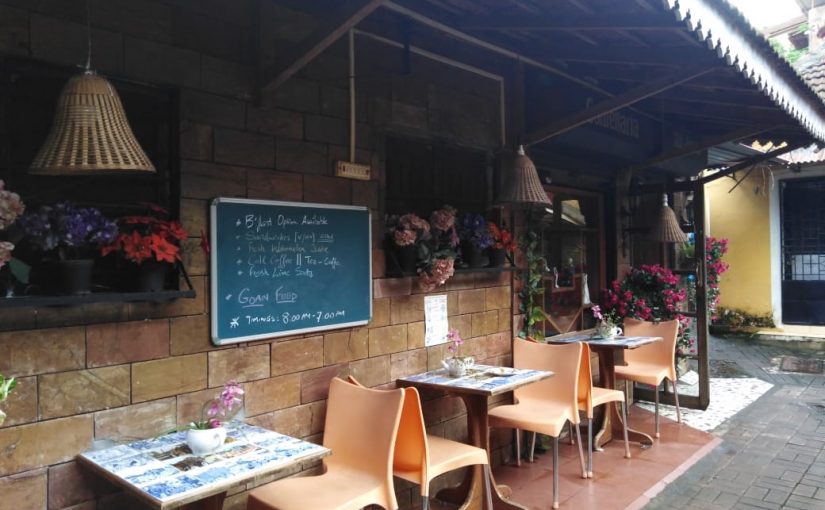 The search for Swiss Roll… took me to the iconic, old world Confeitaria at Fontainhas and Pastry Cottage. Both offer very decent Swiss rolls but slices you may find only at Confeitaria.

DON’T ask me why but for some time now I’ve been in the love with the humble Swiss roll. That’s because a week ago I thought if I couldn’t get my favorite birthday cake, the Portuguese-Goan bol sans rival, I’d just go get one of the excellent Swiss rolls in town Panaji! I’ve got two favorite places to get decent Swiss rolls, the large rolls with delectable cappuchino, strawberry or chocolate cream tucked into its folds, or maybe just plain saucy jam. I find these Swiss rolls a preferable buy because they’re not cloyingly sugary sweet like most Indians like their sweet nothings!
Swiss rolls are rolled out of basic sponge cake and of refined flour of course, but in comparison to cakes and pastries they’re more agreeable… with just a sweet filling running through them. Really, they’re far more sophisticated than cake oftentimes. Don’t want to eat cake? I always say have a slice of Swiss roll instead, my dears, to satisfy any sweet craving. Basically a Swiss roll is a light vanilla sponge cake layered and rolled while still warm. Most of us are more familiar with cakes than Swiss rolls and a good Swiss roll is harder to find. They’re kind of so old-fashioned that most cake shops of high or whatever denomination don’t stock them.
I’ve always found my favorite Swiss roll at 18 June Road Confeitaria, here they’ve been retailing delicately trimmed Swiss rolls for years although one may buy a whole roll, one may also pack up the cut pieces selling at Rs15 per elegant roll piece. It’s scrumptious and I say this is my best Swiss roll in town. If you buy the whole roll you may ask them to slice it for you, it stores in the fridge for a day or two pretty well but slicing the whole roll later on your own is a dicey operation. Better to let the professionals do it.

NOT SWISS
Hey, the Swiss roll’s origins are not Switzerland as we may imagine naturally, but it does originate somewhere in central Europe, maybe Austria which is such a confectionary country (competing with Germany I suppose). Gauri Karkal’s Pastry Shop also keeps a selection of whole Swiss rolls and these come with various fillings be it of strawberry or just jam, also cappuchino. Chocolate Swiss roll would be using chocolate sponge cake of course and this too is very desirable. A friend of mine buys these whole Swiss rolls, fine cut, and then serves them elegantly laced with a topping of fruit custard cream and jelly to make it all more exotic! Newer varieties of Swiss roll have fancier fillings of buttercream, chocolate ganache, fudge, even marshmallow, the friend once ate a Swiss roll stuffed with Finland’s cloud berries and even as she described it I was dreaming of going to Finland to do some cloud berry picking in the wild!
I don’t know why no one makes Swiss rolls stuffed with marmalade filling (Magson’s used to stock a most divine marmalade from Korea but the stocks have dried up and I can’t find it anymore although of course it’s frightfully expensive).
Well, there’re Swiss rolls and Swiss rolls. Sometimes a bad Swiss roll will have a rubbery textured sponge cake and it’s yuck. So you see it’s not so easy to find or even make the perfect Swiss roll, making your own sponge cake needs deft hands and some failures to master the art… a bad basic sponge cake used in a Swiss roll turns our gummy if you have over whipped the batter, which develops more gluten formation!
Funny, another name for Swiss roll is puzzle crossword clue, also jelly roll. Swiss rolls are also called biskuitoulade or roulade in France, also rotolo or biscotto arrotolato in Italy, rullade in Rumantsch. Of course fillings can be many from sweet cream or jams and I’ve even heard of savory fillings…in New Zealand they love raspberry jam, in South Africa apricot jam, and there’s also something called chiffon Swiss rolls which I imagine are ultra sponge cake Swiss roll affairs to delight the senses with their feathery texture and varnish in one or two mouthfuls. I often think it would be nice to find a Swiss roll with say mulberry, jamun, mango, strawberry jamin them and of course, imagine a Swiss roll with the Malaysian coconut jam called kaya rolled in. Kaya is truly yummilicious and out in the South East Asian countries one may find a pandan Swiss roll…pale pistachio color within! Pandan leaves are screwpine are “basmati” plant leaves which are widely used for the green color and the distinct aroma they give to dishes. One may roll up a leaf and pop into cooking rice, or boil for sherbet, or squeeze juice for coloring. Daun pandanus is kewra in India.
Well, this is to say in Panaji I’m happy with Gletta Mascaranhes’ Confeitaria Swiss roll or Gauri Karkal’s Pastry Cottage’s cappuchino cream filled Swiss roll any day, but at the latter’s place you have to buy the whole roll which is Rs200 or so and yes they will slice it for you if you request. Pass around a plate of thinly sliced round Swiss rolls and don’t feel guilty. Like I said Swiss roll is better than cake, half-way between bread and cake! Go find a Swiss roll to warm the cockles of your heart in this monsoon weather with stunning streaks of sunshine in between the rainfall!

KASHUNDI
I AM a great fan of the Bengali mustard sauce kashundi or kasundi having acquired an old love for it. One finds it featuring mostly in Bengali cooking. I didn’t know nowadays one may also buy it in the marketplace! There I was one fine day looking at the vast array of familiar and unfamiliar range of stuff at Taleigao’s Delphino’s and stopped in my tracks to double check – was that kasundi I saw? Yes, it was a long plastic bottle of Golden Crown Mustard Sauce ((Kasondi), 1 kg bottle and I grumbled, why plastic bottle! I looked high and low for a smaller bottle but there was none. To buy or not, I wondered, after all my cooking at home doesn’t involve too much use of mustard or kasondi…but I can use it, little realizing how little use I have for it! Life is like that only. I bought it and there it is rusticating in my fridge waiting for me to use it more often than the odd dollop in a raita. Or a thin layer in a cucumber sandwich.
The bottled kasundi is sharp and tart and I love it but I know nobody would like it if I used it to lace my alu sabzi or whatever else I fancied. Kasundi you must know is mustard sauce or relish and the Bengalis love to use it as dipping sauce for fryums and what not and what not. Kasundi is better than tomato ketchup if you want to agree with me! It’s mostly made of mustard seeds, salt and some khatai or sour ingredient like vinegar may be, I’m not sure.
Anyway, kasundi is basically a fermented mustard sauce or better still a relish and maybe some of the delectable sourness may be because of the fermentation. You may happily replace tomato ketchup with kasundi alias mustard “ketchup” while serving paratha, pakora, samosa, whatever fryum you fancy these rainy days. Of course, line your sandwiches with kasundi. You may coat fish fillet with kasundi, wrap in banana leaf and steam cook…call kasundi India’s Dijon mustard sauce if you like.

WIDE VARIETY
In Europe mustard sauces are another thing altogether and may be even sweetish (eg honey mustard) and there’re several varieties of mustard too, some stronger in pungency, some milder. Colman’s Mustard is famous and the Englishman’s love with their plowman’s lunch in pubs, to dip fish and chips in!
Is mustard sauce healthy? But of course, mustard seeds are rich in the omega-3 fatty acids, selenium, fiber (which keeps your BP down and prevents constipation), protein, magnesium, iron and calcium…but don’t overeat or your stomach will burn. Too much of a good thing is bad. But I would say a teaspoon of kasundi is healthier than mayo! Mustard is a healthier choice vis-a-vis dips, sauces, mayos… we’re comparing here. Try make cabbage coleslaw using kasundi! Ahhhhh, Kasundi: No sugar, no fat, sodium but that’s it. A teaspoon of kasundi would be no more than five calories I dare say.
What gives mustard that sharp sting on the palate? An ingredient, called allyl isothiocyanate, which is volatile enough to evaporate on the tongue and float up the nasal passages sparking the sinuses like a gas — provoking the sneezes, sharp ahhhh breaths and the sting on the palate which is so loved! A bit like biting into a horseradish if you’ve ever eaten it, hard to find; try mooli or radish roots in lieu.
Mustard come in black, yellow, brown, white, check them out for yourself if you have a mind to, they come in yellow mustard is said to be the mildest in flavor and black mustard the strongest. You may not chew on mustard seeds for they’re bitterish and are considered a hot spice in Ayurveda, warming the constitution in wintry climates and seasons. I know quite a few of the northern states are in love with their thick golden ghani pressed mustard oil and will use it a bit on their skin after a bath….not yuk, turns into a heady aroma with body heat, rather a turn on! Good protection for skin, economical to use, but just a bit okay.
What did I buy? Elmac Agro (West Bengal) – Golden Crown Mustard Sauce (Rs150 or so kg bottle). I wish it would go into a glass bottle though for I hate buying food in plastics.