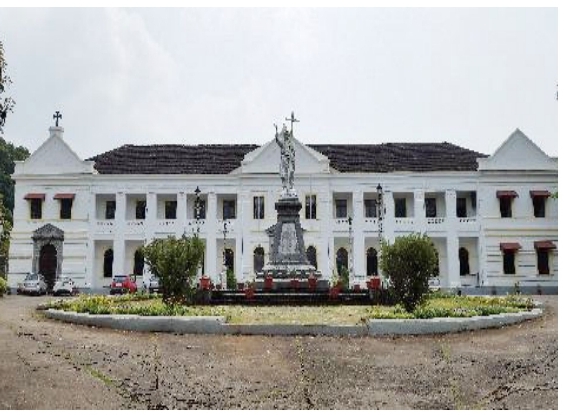 ALLIANCE: Will the Church accept the alliance led by the NCP which includes the 10 Congress MLAs and 2 MGP MLAs who defected to BJP, with Reginaldo Lourenco as the candidate for CM?

Though in the past individual parish priests have played a major role in electoral politics in the state, their influence has been reduced consequent to the reduction in the percentage of the Catholic population due to mass migration.

HISTORICALLY the church has played a major role in Goan politics. The Archibishop himself does not at least publically direct the flock to vote for a specific party. But over the decades the Bishops have lost control over the parish priest who are the law unto themselves. And Parish Priest have always paid a major role in elections at all levels, particularly assembly elections in Goa. The Church has a major influence on the selection of congress candidates in Salcete and other catholic dominated constituencies.
In Taleigao for instance the late Fr Concesao used to be the strong supporter of Babush Monsarrate. Fr Concesao light the good life and the Monserrate ensure that he lacked nothing. I recall the occasion when a Founder Director of Goan Observer, Florian Lobo, contesting the elections against Babush Monsarrete in Taliegoa. I recall that Arvind Bhatikar, the former chairman of the Marmugoa Port Trust and I address the public meeting in a paddy field virtually opposite the house of Babush Monserrate. The compare was Babita Angle, who was the mayor of Margao Municipality for quite some time recently. We were shocked over the poor attendant by Catholics at the public meeting. We later learned that the Parish Priest had been preaching sermons in favour of Babush Monserrate. Even the paddy field where the public meeting was held has given way to a huge building complex.
In Santa Cruz the former Director of Dysosian Education, Fr Francisco Avinash Rebello, was the parish priest. At every function held by the parish the goon, Rudolf Fernandes or his mother Mummy dearest, Victoria Fernandes, was the chief guest. I recalled asking him once why he was extending patronage to the goons of Santa Cruz who were notorious. The police even believe that they were involved not only in my assault for forcing Dayanand Narvekar to resign his position as speaker but also the brutal assault on Anthony Fernandes the Herald Chief reporter for the plans of Rudolf to start a Goan Matka. FR Avinash defended himself by claiming that the extended generous support to the church.
The politician who has exploited his religion to the maximum extent is the Navelim MLA and former chief minister Luzinho Falerio. Quite besides being the darling of the Bishop and the Navelim parish priest, Luzinho also became very close to Sonia Gandhi. This is because Sonia Gandhi is a very devote Italian Catholic. Italians are very religious and indeed the Vatican city where the Pope Francis, resides is in Italy. Luzinho along with his senior colleague Eduardo Falerio used to attend the same church in New Delhi as Sonia Gandhi. The senior Falerio also had the advantage of knowing Rahul and Priyanka closely. This is because of his late wife Muriel Falerio, who use to teach French to the children.
Eduardo Falerio, was made a minister of state in charge of important portfolios like finance and external affairs dues to his proximity to the Gandhis. Similarly Luzinho Falerio, when he lost the election to Churchil Alemao in 2012 from Navelim, was take upstairs as secretary of the All India Congress Committee. HE was promoted to general secretary and appointed as the observer for the predominantly Christian north eastern state. But for Luzinho Falerio the BJP would not have formed the government in 2017. With 17 of the 40 seats and a pre-poll understanding with Goa Forwards Vijai Sardesai, Digambar Kamat was scheduled to become the Chief Minister. But Luzinho Falerio is alleged to have told Rahul Gandhi that if Digambar was appointed chief minister, the BJP at the centre may arrest him for his alleged involvement in the mining scam. Which was why the high command observer Digvijay Singh refused to stake a claim to form the government in 2017.

Sharad Pawar first came to power 1970 as the leader of the Progressive Democratic Front which toppled the then Congress Government. Pawar formed an alliance of the left and socialists parties.
After the elections is Maharastra Sharad Pawar managed to keep the BJP out of power. The BJP which had ruled the state for 5 years could not get even a simple majority in the elections held last year in Maharastra. Power stepped in and formed the alliance of Shiv Sena, NCP and Congress. It was agreed that Uddhav Thackery will be the chief minister while Ajit Pawar of the NCP will be deputy chief minister. Pawar showed in Maharastra, that in politics there are no friends or enemies but only alliance partners.
Sharad pawar is trying to form an alliance in the centre to make sure that the BJp does not come back a third time in the 2024 Parliamentary elections. Unfortunately, India does not have a rule unlike US, that the same party cannot have more than two terms in government. Recently, Pawar convened a meeting of all the opposition parties including Congress, Samjawadi party, Trinamool Congress and several other groups to form the rashtriya manch to take on the BJP.
The surprise element is that the master strategist Prashant Kishor may be the link between the various groups. Kishor who was responsible for the victory of the BJP in the 2014 and 2019 elections also helped Nitish Kumar in the Bihar elections. More recently, he helped Mamata Banerjee in West Bengal and Stalin of DMK in Tamilnadu.
Prashant Kishor has had several meetings with Sharad Pawar. Significantly, he has also met other opposition leaders including Rahul Gandhi. With the help of master strategists Sharad Pawar hopes to form an alliance wich will be able to keep the BJP out!

One thought on “WILL CHURCH ACCEPT NCP ALLIANCE?”