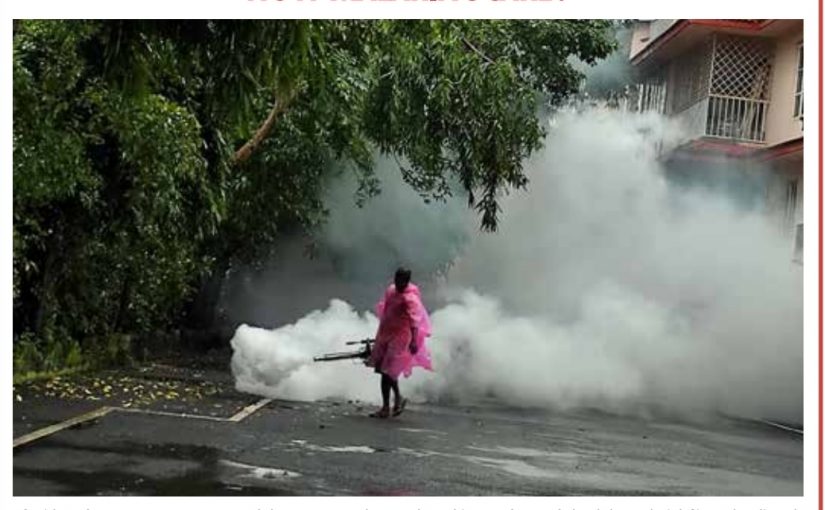 Covid-19 fears are not yet over and the monsoons have ushered in new fears of death by malaria! Given the dismal drainage situation of gutters and potholes full of stagnant water everywhere….. here picture above shows belated fogging being carried out by CCP workers in the Caranzalem area on Thursday July 22, 2021. Caranzalem resident hope this will make a difference to the malaria pandemic! (Pic by Bindiya Vaval Naik)

UNION Minister of State for Health, in a written answer in Parliament, stated that no State or UT has reported any death due to shortage of oxygen during the 2nd wave! First person failing to correct this blatant falsehood was the South Goa MP Francisco Sardinha who was present at the time. And now he is being consulted for leadership issues!
All Goans know that GMC Dean Shivanand Bandekar deposed before the HC that oxygen had to be rationed at the GMC due to a shortage, deaths occurred regularly every day midnight hour onwards due to oxygen problems. At the South Goa District Hospital one woman gasped to death waiting in her car outside the gates and almost all newspapers reported this.
Classroom civics teaches us that people elect MLAs to look after their interests. This Goa government must reply to this Parliamentary statement and Goa’s MP must speak. Leaders of other political parties are watching BJP supporters in Goa.
Governor of Goa PS Pillai too is taking an interest and showing sufficient empathy by paying a condolence visit to the Partagal Math! The people are waiting and watching.
NHRC, GHRC, GMC doctors: We can see and hear but unfortunately, we keep silent. Doctors in Gujarat reported that they had to decide to whom to give oxygen! How have we fallen like this? The people must make up their mind what kind of a government they need and in Goa and India!
—R Fernandes, Margao

BAN ALCOHOL IN GOA!
ALCOHOL consumption was associated with 62,100 or 5% of newly diagnosed cancer cases last year in India. This is according to a study published in Lancet oncology journal which also shows alcohol use on the rise in India.
This is very disturbing and forget the Central government but is the Goa government concerned in the people’s wellbeing or is unfortunately uncouraging alcoholism in Goa? Why do our respective governments, despite knowing all the ill-effects of liquor, historically issued licenses to Goans and non-Goans to over the years to open up new bars and liquor shops even in remote interior Goan villagesupopen up new bars & restaurants, wine stores etc (forget cities) even in the most remote interior Goan villages so that people may waste their little income into imbibing liquor as if it’s going to do them any good. All this is doing is slowly destroying family happiness when a family member or an entire family takes to habitual permanent drinking of liquor good or bad, mostly bad and indifferent. Liquor is liquor, it is alcohol which damages the organs of the body.
Yet our shameless government continues to promote liquor drinking indirectly and directly! I personally feel that the government instead of selectively unleashing traffic cops to extort hard-earned money from soft targets like two- wheeler helmetless riders (including jobless unemployed poor people) in the name of saving precious lives, should bring in (ignoring all types of protests) a complete ban on ghutka/tobacco products and distribution/sale of liquor in the state at the very earliest.
Please curb the growing dangerous trend of alcohol abuse amongst Goans and non-Goans in Goa to improve the quotient of happiness in families. Better sense must prevail.
—Jerry Fernandes, Saligao

SET AN EXAMPLE!
PERSONS in public life are duty bound to be moral exemplars and practice ethics since they have pledged to uphold and defend the country and its people in all ways. There is no dividing line between their personal and public life. Private lives of public figures are wide open to public scrutiny.
What our politicians and bureaucrats do in their private life matters for it impacts their public responsibilities. Can they be ethical in public if they are unethical in private? Their private life reveals more about heir morals than their sound bites.
For society to progress and prosper we need people in public life who are competent, honest, dedicated, humble, experienced and who put selfless determination above all else.
Instead we find those in public life expect others to observe moral and ethical standards! Let them practice what they preach to set an example for society, be icons by rigorously following what they wish others to follow.
They must say what they mean and always mean what they say. Their word must always be their bond. Above all their actions must speak louder than their words. They must always be judged on what they say and what they actually do and be transparent and accountable to those that they are privileged to serve.
The French Nobel Prize winning author and philosopher Albert Camus had rightly said “A man without ethics is a wild beast loosed upon this world.” Goa deserves better. We cannot afford to have wolves in sheep’s clothing especially in politics!
—Aires Rodrigues, Ribandar

LOWER TAXES!
IN response to the AAP-BJP debate on free power up to 300 units, I would like to give some pointers on urgent taxation issues. I feel some announcement by the Opposition parties should be on obnoxious fuel prices in Goa and relief should definitely be given here as the high fuel prices lead to inflation.
Everyone is bothered about this. Also capping of road tax to a minimum percentage in Goa should be implemented as it is at top of the tax structure, the automobile sector too is a huge revenue and job generator.
Similarly, reduction in stamp duty and registration charges to a minimum should be done as Goa rates are very high and investment unfriendly, and the realty sector too is a huge revenue and job generator.
The above three measures will impact remobilisation of the State economy and also the finances of the people. It is a given fact that lower taxes lead to higher tax revenues for the State due to more purchasing power in the hands of the people.
—Vladimir De Monte Furtado, Panaji