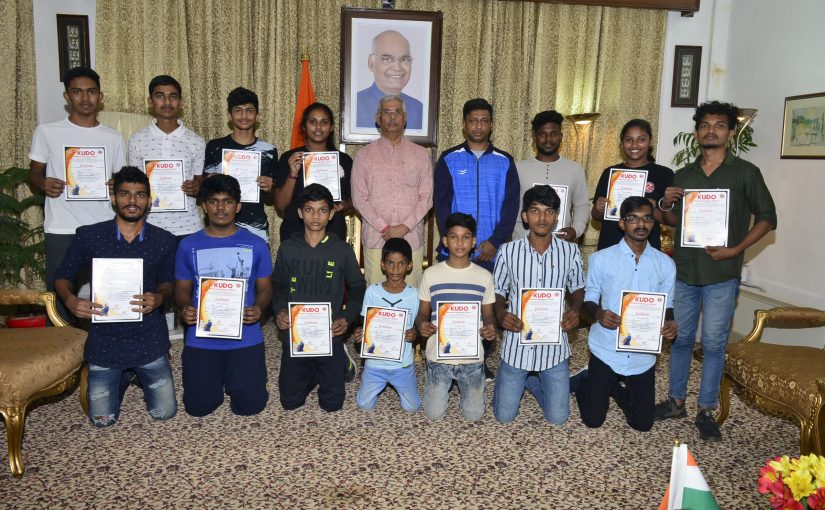 THE WINNERS and medal-holders of Goa State in the 11th National Level KUDO Championship held at Solan district of Himachal Pradesh, called on Governor  Rajendra Vishwanath Arlekar at the Raj Bhavan on Wednesday, September 8, 2021.

The players shared their experiences and championship details in Himachal Pradesh and in turn Governor Arlekar congratulated the players, commenting that sports play an important role in the life of individuals. It helps provide physical as well as mental strength. He wished the Goan players a bright future and hoped that such a national competition be organized in Goa. It would create interest amongst the younger generation towards sports like the martial arts. About 1,500 participants from 28 states and Union territories had participated in the national level KUDO competition which held from September 2 to 7,l 2021. __________________________________________

Not to be missed!

BE SURE to catch the 10th ICG Development Dialogue over Zoom Live on “India’s Economy in Post-Covid Times” with Dr K Subramanian, on September 14, 2021 at 5pm.  The dialogue will be conducted by ICG Vice-President Dattaraj Salgaocar, with an introduction by ICG President Yatin Kakodkar. Please register at https://bit.ly/3jsisRL

The narrative is that India has made impressive economic and social gains since the 1980s and especially since the 1990s. Achieving annual growth rates of 7% plus for over two decades, India created a fairly large middle class and pulled more people out of poverty than any other country except China.

However, even before the Covid-19 pandemic interrupted growth on a global scale, it had become evident that India needed to address shortcomings and bottlenecks in areas such as governance, infrastructure, land and water utilization, knowledge creation, income distribution, female labour force participation and provision of public goods. With India actively vaccinating its large population, the emerging post-Covid global economy will throw up opportunities and new challenges for the resumption of econ0mic growth.

It is a privilege for the ICG to present this dialogue with Dr K Subramanian. It may be remembered that Krishnamurthy Venkata Subramanian is the Chief Economic Adviser (CEA) to the Government of India since December 2018 and was inducted into the 15th  Finance Commission’s advisory council in May 2019. He studied  electrical engineering at IIT-Kanpur and then went to IIM-Calcutta where he was awarded an Ewing Marion Kauffman Foundation Dissertation Fellowship. He holds an MBA and PhD in financial economics from University of Chicago Booth School of Business. He is a tenured professor at the Indian School of Business (ISB) where he was awarded “Professor of the Year” in 2019. He has worked in expert committees for Securities and Exchange Board of India (SEBI) and the Reserve Bank of India (RBI). He has also worked with JPMorgan Chase, ICICI Bank and Tata Consultancy Services. Dr Subramanian was a board member in Bandhan Bank, the National Institute of Bank Management and the Reserve Bank of India Academy.