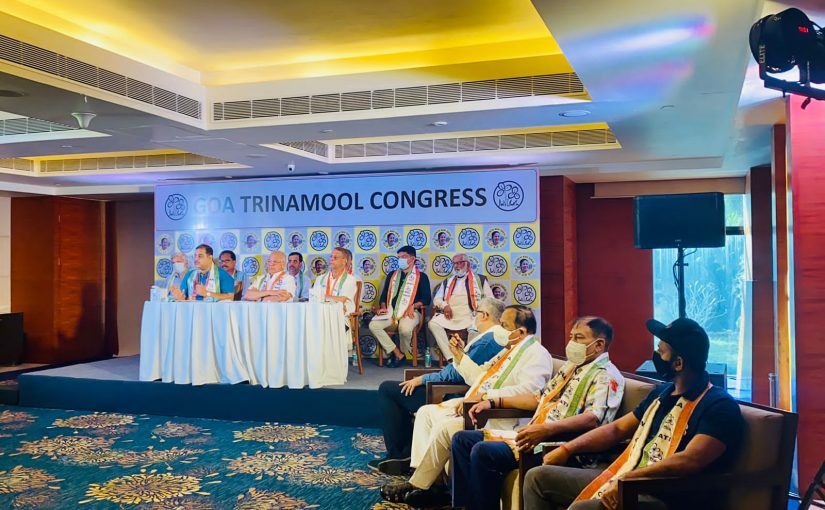 GOA TRINAMOOL CONGRESS IS HERE …to unite all the breakaway Congress parties and come up with a movement and a campaign to take on the BJP giant politics of communal divisivness! Luizinho Faleiro is convinced the fight must begin on Goan soil and along with him are many others who’ve quit the grand old Indian Congress Party with him. Advocate Yatish Naik for one thinks that West Bengal’s Mamata Banerjee is the natural person to take on BJP powerful “high commands” Narendra Modi and Amit Shah. Picture shows some members of the breakaway group, while on the floor as observers are TMC’s Derek O’Brien, Sukhendu Sekhar, Prasun Banerjee and Manoj Tiwary; this is the first of series of press conferences which was held at the Marriott Resort on September 29, 2021.

GOA’S political scene is hotting up with yet another party in search of power and pelf to take on the ruling BJP! Welcome West Bengal’s Goa Trinamool Congress (High Command Mamata Banerjee who is fondly called Mamata-didi by one and all) to Goa – the GTC promises to usher in a “New Dawn for Goa” courtesy the leadership of 7-time Navelim MLA Luizinho Faleiro who recently defected to the Trinamool Congress.
In yet another press conference on Wednesday, September 29, 2021, the second in a series lined up to woo media people and the people of Goa, Mr Faleiro said he was not invoking just another political party but a movement. He said, “we (Trinamool) will respect what you have preserved.” Clearly his Mr Faleiro’s new muse is no longer Congress High Command Sonia Gandhi but the simple, humble, but strong fighter Mamata Banerjee. The message going out is there is no High Command in the Trinamool Congress but that is hard to believe.
Trinamool Congress’ ambition is to give all those youth leaders below 45 years of age a chance in shaping the future of this country. And the Goa Trinamool Congress’ work must begin in Goa, “I can tell you proudly here that Didi is for an alternative governance….the Bengali people and the Goan people have a lot in common, they both love fish, they both love football, and Didi has promised to bring the three football teams of West Bengal to Goa.”
In the last ten years, Mr Faleiro said a “culture of hatred” for minority communities is being spread in the country. Starting from “this day the Goa Trinamool Congress which will be of Goa, by Goans and for Goa…the people are the masters, we will go to their doorstep and find out what they need.” He said that “75% of Goans don’t want BJP” because of its divisive politics. The long and short of it being Goans now have a wider choice in the political arena and for the upcoming Legislative Assembly elections in February next year. They may want to look at what Trinamool Congress stands up for as it joins the other half-a-dozen parties which will be fighting it out to convince Goans who is the best choice for them.
A media person asked Luizinho Faleiro about what there was for him after switching loyalties from a Sonia Gandhi to a Mamata Banerjee, will he be chief minister if the Goa Trinamool Congress wins in Goa? Or is his reward going to be a Rajya Sabha seat in Delhi? However, the former Congressman from Navelim evaded the question lightly saying that he still has to think about some things. After all he had turned down the Congress president’s post on poor health grounds! And then gone and joined the Trinamal Congress and shifted allegiance to Mamata Banerjee, he reacted, “I will be working for Goa and the Goan people.”
There is nothing left to do now except perhaps await the “New Dawn” which the newly formed Goa Trinamool Congress promises the people of Goa. The party’s new dawn manifesto still has to be defined but cheer up, there is hope yet for Goa to escape from “divisive politics.” Needless to say along with Luizinho Faleiro’s shocking defection from the Congress there are his friends personal and not-so-personal who go with him.
To name some of them there is Lavoo Mamledar, Yatish Naik, Vijay Vasudev Poi, Mario Pinto de Santana, Anand Naik, Shivdas Sonu Naik (better known as N Shivdas), Rajendra Shivaji Kakodkar, Antonio Monteiro Clovis da Costa…and undoubtedly the campaign is on to woo more Goans into Mamata-didi’s clouds of charisma. Quoting advocate Yatin Naik (formerly general secretary of the GPCC, chairperson of the Goa Congress, gold medallist in law from Goa University, one of the Congress’ most articulate young leaders), “Look, you have to make up your mind if you’re anti-Modi and what he represents. I think Mamata Banerjee is the natural leader to take on the BJP! She is more inspiring than Narendra Modi or Amit Shah for me…”
Present at the press conference as floor observers were Leader of TMC in Rajya Sabha Derek O’Brien who shied away from answering questions, TMC Chief Whip in rajya Sabha Sukhendu Sekhar roy, Lok sabha MP Prasun Banerjee and MoS Sports and Youth affairs (WB) Manoj Tiwary. Now everyone is awaiting Mamata Banajee herself who, confided Luizinho Faleiro, has promised to walk the kilometres with the people of Goa…into a new dawn of freedom. Mamata-didi loves Goa and Goans and is coming down soon, as soon as the inauspicious “pitrupaksh” season is over!