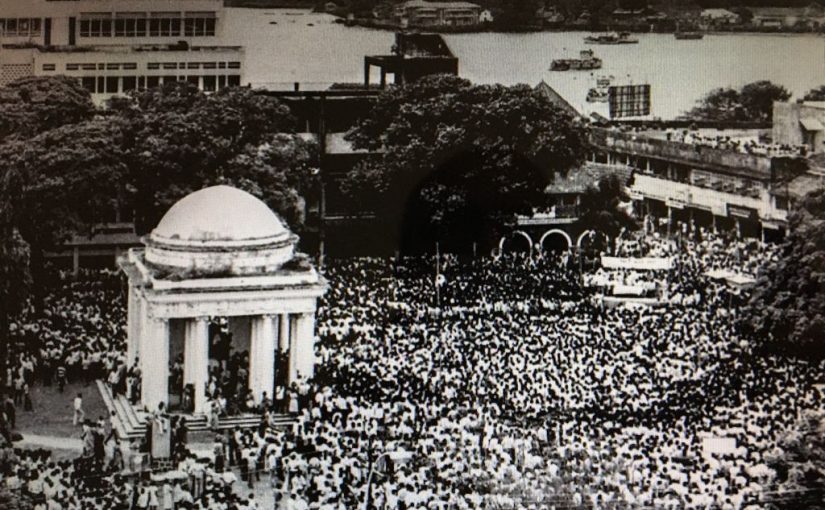 BIGGEST: The Konkani Projechi Avaaz rally mobilised by the `O-Heraldo’ when I was editor was the largest ever in Goa with two lakh people attending it. The objective of the rally was to demand official language status for Konkani.

The 38th anniversary of `OHeraldo’ or the ‘Herald’ daily is also my 38th year in Goa. I founded and gave the ‘Herald’ the voice of the people. The present managing director and owner Raul Fernandes has turned it into the voice of politician Luizinho Faleiro and the Trinamool Congress!

SUNDAY, October 10, 2021 was my 38th year in Goa. It was also the 38th anniversary of the Herald daily. Though I had taken the Herald from Portuguese to English within a week of my arrival in Goa on October 1, 1983, there was not a single mention of my name in its 38th Anniversary issue! When I started the English edition of the Portuguese `O-Heraldo’ I intended it to be the voice of the people. In its 38th year the Herald has become the voice of Luizinho Faleiro and the Trinamool Congress.
How much money has changed hands between Raul Fernandes, the owner of Herald and Luizinho Faleiro, I do not know. But I do know that it was Luizinho Faleiro who was responsible for getting a plot at the early Verna Industrial Estate for the printing press of the Herald. It was Luizinho Faleiro who had allotted a plot at the Verna estate long after the expiry date.
It is similar to the chief minister who stands accused retrospectively for converting mining concessions into leases. I still have a sheet of paper in Raul Fernandes’ hand writing instructing me not to write anything against his close friends, including Luizinho Faleiro and Alex Sequeira who was then power minister.

voice of the people

Since none of the people including Dr Joe D’Souza have cared to mention my name even fleetingly in the latest Herald’s anniversary issue, I have no choice but to narrate its real history and how it became the voice of the people. I did not give the early `O-Heraldo’ the title as voice of the people. Which is obvious from this picture of the Konkani Projecho Avaaz in 1986. It was the biggest ever rally which took place in Goa. When people had come in tens of thousands and arranging their own transport. This was not a Kharedi Yatra which the Herald has become today. The Goan people who had come to the rally had come to demand official language status for Konkani, their mother tongue.
We have this unique classic picture in the Goan Observer which was taken by Lui Gudinho who was the Herald’s ace photographer. Within a month of starting the Herald the then Chief Minister Pratap Singh Raoji Rane asked my patrao Antonio Caetaninhu Fernandes to sack me.
The Kala Academy Director then was Damu Kenkre, a very well-known theatre personality. The Indian Music Choir of the Kala Academy was asked to present a programme for the first time ever on the all India meetings of the Hotels Association. Damu Kenkre, being an expert choreographer, had designed suitable costumes for the girls performing in the events. Now Vijayadevi Rane, wife of Pratap Singh Raoji Rane, objected to the colours of the costumes that had been designed by Damu Kenkre. Instead, she wanted the girls to wear green sarees with orange blouses and look like the national flag. Damu Kenker rejected the idea outright.

CM Rane was furious. “Does not my wife have the right to choose the colour of the saree?” Believe it or not Pratap Singh Raoji Rane sacked Damu Kenkre as director of the Kala Academy. I met Damu Kenkre at Club Vasco where he told me his bitter story. I wrote an article on the front page of the oHeraldo then on how a dream was shattered because of the colour of the saree.
A few days later at the funeral of the late VM Salgaocar, October 13, 1984, Pratap Singh Rane went up to AC Fernandes and asked him to come to his office. When we went there Rane asked my patrao to sack me on October 13, 1984. The patrao, who was a self-made businessman with great dignity, so unlike his son Raul Fernandes, told the CM “It is I who pays his salary, I will decide who I want to sack.”
I WAS having a cup of tea after waking up in my basement flat in Dona Paula. Some guests of mine had come from Mumbai. I had organized a cab for them as they were keen on going to Calangute and Candolim beaches. Which is where nowadays the largest number of new covid cases are being reported from tourists. Around 8 am, I got a call from my friends. They gave me the shocking news that they could not cross the Mandovi river as it has broken into two.

I did not believe them as the bridge was built only five years ago. This was the first bridge across the Mandovi river. Subsequently, successive governments built not one bridge but three bridges across the Mandovi river.
I remember when I got the news of the Mandovi bridge falling down I had got dressed up quickly, taken a motorcycle pilot, rushed to see for myself (as you can see in above pic) how the entire Mandovi bridge has snapped like a match stick. Fortunately, since it was Sunday and early in the morning, there was no one or vehicles using the bridge.
The bus carrying the then Collector of Goa, Shakti Sinha, who passed away recently at the age of 64, had crossed the bridge five minutes before it collapsed. Coming to more recent times, the Atal Sethu bridge which was Parrikar’s dream project, is in such a bad state that it could collapse anytime!
So I would say it is safer to take the ferry across Mandovi river or learn to swim across it. Parrikar has a passion for building bridges. After becoming chief minister the first bridge he built was Corjuem’s fancy bridge which connects two parts of Aldona. Parrikar was so proudly of the bridge that he held the Chief Minister’s first IFFI party on the bridge. Of course we do not know when it would fall down like the first Mandovi bridge.
Within two months of my setting up the OHeraldo, the Commonwealth Heads State Retreat was held in Goa. The Commonwealth comprises of the group of countries which were part of the British time colonial Raj. At the peak of British colonialism Britain ruled over 54 countries. Can you imagine a country of the size of Maharashtra virtually ruling the world? This was from the 14th and 15th centuries the maritime countries built and operated the largest number of ships and manufactured the largest number of armaments to wage wars. The countries originally ruled by the Britain included Australia, Canada, New Zealand and several African countries including Kenya and Zimbabwe.

The Commonwealth countries’ heads used to meet every two years. Prime ministers and presidents used to take a break meeting at holiday resorts where they would talk and meet one another collectively and individually and watch each other privately. Indira Gandhi decided that the CHOGM retreat in India should be held in Goa in 1983.
Goa’s CHOGM road was built especially from Porvorim to Candolim for the Commonwealth Heads of State Retreat. Imagine the challenge of reporting and covering an event where not one or two prime ministers but 52 heads of state and countries. This included UK’s Margaret Thatcher, Pierre Trudeau whose son is now the prime minister of Canada. At the Taj Aguada complex 52 villas were especially made over for the dignitaries and world leaders.
A few days before the retreat was to start I went to visited the Aquada Hermitage which was a special section of the first Taj holiday resort in Goa. An excited and proud horticulturist proudly revealed that the beautiful garden grounds were created around a floral theme for important visitors. For example, Indira Gandhi would occupy the cottage with white flowers and Margaret Thatcher would stay in the cottage surrounded by pink flowers.
I returned to office and wrote an article about how “52 Flowers Will Bloom.” The next day the Police, the CBI, Intelligence Bureau, RAW, were all at my residence. They wanted to arrest me because our report had described each cottage by the flowers it represented. Terrorists could target leaders they wanted. If they wanted to target Indira Gandhi all they would have to do is target the cottage with white flowers.
Fortunately, the chief secretary came to my help and said it was an innocent mistake. But for the safety of the heads of state in Goa all the flowers were removed!
And so I come to the last incident of my 20 years of editing the Herald in its most exciting years. In 1987, the Konkani Projenchi Avaaz called for a massive rally. Demanding that amchi mai bhash should become amchi raaj bhash. This rally was the result of my campaigning for over a year to get the people of Goa their rights. And to get their mother tongue of Konkani recognised as the official language of Goa. Every day on the front page of the Herald I would ask Goans to wake up and fight – it was the “Utt Goenkar” campaign.
People got so involved but tired that wherever I want for a party that evening they would look at me and smile, “Boss Goenkara!” Similarly, a strong campaign was going on in the Marathi daily Gomantak by its editor, another Narayan Athawale, who used to attack me only in print on his first page. In fact, we were old friends but thought it was a good idea to attack each other in our respective newspapers!
Most days I used to have dinner at his residence which was at the Gomantak Building itself. Tired of the three years of agitation we were running in our respective papers whenever people saw us they would say “Narayan Narayan!” But I would like to reiterate that that rally at Azad Maidan to call for Konkani as official language of Goa was the largest ever seen in Goa after Liberation. The photographs taken for the Herald were again taken by Lui Godinho, who is now happily retired in London.

One thought on “FROM VOICE OF GOENKARS TO VOICE OF LUIZINHO FALEIRO!”