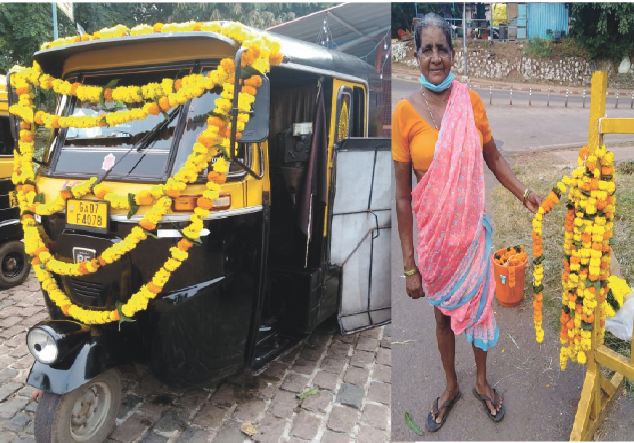 IT’S DASSERA IN GOA
IT’S DASSERA IN GOA and there’re cheerful marigolds (roza in Konkani, gendaphool in Hindi) everywhere down the streets of capital city Panaji, to light up the eyes! This year they’re selling at Rs140kg in Panaji’s market although street-side flower vendors are pricing their metre-long marigold  garlands to grace two-wheelers/four wheelers at Rs50 to Rs100 (for the large yellow marigolds as opposed to the more predominant orange ones). Here an autorikshawallah at Dona Paula circle has decorated his auto gloriously with marigolds, and a smiling marigold vendor urging passers-by to buy marigolds for some luck. Marigolds and the leaves of the apte tree are considered as auspicious offerings to the goddess Durga/goddess Amba. (Pics by Pankajbala R Patel)

LAST the first list of qualifying marks for admission to some of the undergraduate courses in colleges, affiliated to Delhi University, were set at ridiculous cut-offs of 100%! The courses are for BCom (Honours), Economics (Honours), Computer Science, Political Science (H), and Physics (H).

The principals of different colleges revealed the news that over 9,200 candidates of the 3% of the total registered in DU have an aggregate of 100% in their XII standard. It is really astonishing that nowadays students score cent per cent in their XII standard not only in the above subjects but also in English! With such marks our students should join Ivy colleges instead of Indian ones. With such brilliant students, in the coming years India should have a clutch of Nobel Prize in Physics, Literature and Economics.

Parody apart, how can students score full marks in English? Are we better than the native speaking English people? With such high scores, our students should be waived off from appearing in international competitive exams such as TOEFL, IELTS, GRE, etc. None of the Indian Universities figure in the top 100 in the world and when this is the case the DU cannot feign or act as elitist and demand the highest cut-offs.

Where would the students go, who have scored less? The government needs to some have checks and balances in the education system — India will become the laughing stock of the world.

CONGRESS continues to dilly dally on Alliance. P Chidambaram wants to pull a rabbit out of his hat? Win the Goa elections on its own steam? Keep dreaming. The pitch is queered. All the best batsmen in your team cannot defeat a bowler’s pitch.

AAM Aadmi party has now fought the Panchayat elections and even won a seat. They are, however, hardly sure of even a single LA seat. To overcome this, they have diluted their Professional profile of candidates and turned to “winning” candidates. TMC, morally totally wrong to `enter the finals without going through the qualifying rounds’ —  please note Goan  footballers who joined them will still capture only votes.

Both parties will eat votes from the Congress. Therefore, an alliance with AAP and Goa Forward is a must. The number of seats shared with these two must be in single digits and it will take great political acumen to do so. But they must act now. An alliance with the NCP will throw up family Raj which must not be allowed.

Party interests must be kept aside: Goa’s interests are primary. Bhumiputra, coconut grass, drugs, casinos on land, new Governor’s  Vista Palace – they are all becoming legal tender and all Goa is serving such inferior and immoral tourism which will only lead to more criminalisation society.

An alliance which may see hardly 10 seats between AAP and GF, must have a detailed written conditions right up  to CM and minister candidate level which are  frozen. Sadly, PC is working in the air with bravado inputs from mature leaders who are all eyeing a candidature and hence, do not want any alliance. His task is cut out: ask the errant “silent, mature leaders” to showcase their achievements before fighting only within the party.

THERE should be zero tolerance to even the faintest governmental interference in the functioning of our judiciary. The setting up of a National Judicial Infrastructure Corporation could go a long way towards improving our judicial infrastructure while maintaining its independence and autonomy.

This corporation could act as a median and catalyst in pursuing judicial projects instead of sitting judges having to interact with politicians in power. The Constitution of India is very clear on the distinct roles of the Executive, Legislature and Judiciary. It envisages a free, fair and independent judiciary. The highest standards of judicial independence must always be ensured.

With the sanctity of the other pillars of our democracy currently severely dented, our only hope is the Judiciary but with the government wanting to overpower the Judiciary too, there is a very disturbing disquiet over the slippery slope on which judicial values are slithering.

An effective judiciary guarantees fairness in judicial processes and transparency. The public must be confident that the judiciary is beyond reproach. Transparency is a fundamental component of judicial independence. Any direct or indirect interference by the politicians in the selection and appointment of judges is a threat to the very independence of the judiciary.

If the judiciary is reduced to being a mouthpiece of the government, the courts will lose all relevance. It has to be ensured that judicial accountability is maintained at all times with our judges conforming to the highest standards of uprightness and integrity. If judges do not act independently the balancing the scales of justice, the temples of justice, will become pointless.

IT IS  known that the air that we breathe contains 78% nitrogen and 21% oxygen. Even in areas where there are many trees, oxygen content may not be of very higher levels than the 21% that the air contains. This air does not have a detrimental effect on the lungs as is very plainly evident.

Now in the cities and industrial areas, where coal fired power plants and high vehicular traffic is present, the percentage of carbon dioxide and carbon monoxide affect your health considerably. Oxygen that we inhale gets incorporated in the lungs to form oxy-haemoglobin, which is distributed to all the extremities of the body through the blood stream. So 21% oxygen in the air is beneficial to the lungs, probably because it contains the right amount of oxygen as also the right percentage of nitrogen which is an inert gas in comparison.

However, the medical  oxygen that is administered to patients, even in Covid-19 cases, contains 90% of oxygen, 5% of nitrogen and 5% of argon which is also even more inert than nitrogen. Though this composition of medical oxygen is thoroughly researched and used, is there a possibility that the high percentage of oxygen content in medical oxygen is harmful to the lungs and may cause harm due to its much higher percentage?

A study of the harmful effects of medical oxygen has to be conducted by medical researchers to confirm that medical oxygen is not harmful to the lungs and absolutely safe!

MAHARASHTRA bandh was a success. That is being said. But what is true? Everyone saw it. The situation in bandh is similar in other states of India. Only reasons and states are different. People suffer a lot. That is the common point.

Traders are being forced to close shop This is being witnessed. Leaders and activists will not force anyone to  join the bandh but why was I declared by those who know very well that no one will respond to the call for a Bandh and it fall flat. That is what happened.

Leaders of the ruling party, activists were telling shopkeepers to close their shops. How are they people’s representative? Obstructing those who work hard to fill their family hunger. Shopkeepers closed out of fear of the activists. With that in mind people preferred to stay home and said bandh a success!

Breaking the glass of BEST buses, beating rickshaw drivers, etc. It was such an outburst of frustration. It is wrong to go about saying “You close the shops or else…” in loud voices. People obeyed even when they didn’t want to. These same leaders or activists call us  Tai-Dada, Kaka-Mama, Aaji-Ajoba, Mavshi and appeal for votes. These same people bully us for bandh.

Is the meaning of understanding democracy? Is there such arrogance in democracy? Everyone has a right to protest but a protest or bandh requires people’s voluntary participation. This is not so and this is what came to the fore in the Maharashtra Bandh on October 11. People’s representatives, no matter which political party they belong to, should be seen solving the problems of the people but not like this, so aggressively as seen during the bandh which is useless.