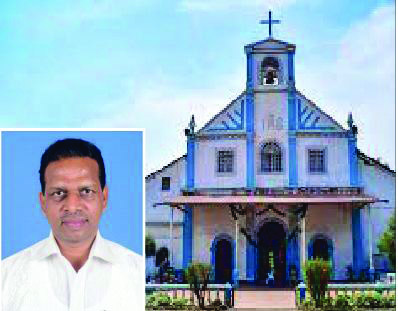 MAJORITY: Velim is a Catholic majority constituency though a number of the minority community have migrated to London.

Benjamin Silva, who has just joined the Congress, is confident of winning the Velim seat. Velim is part of the famous AVC (Assolna, Velim and Cuncolim) trio of constituencies which played a major role in the struggle against Portuguese colonial rule. Benjamin Silva, though a new comer to the Congress, has a record of social service.

It is almost confirmed that I will get the Velim Congress ticket,” Benjamin Silva
HAVING only recently joined the Congress party, the former Velim Independent MLA Benjamin Silva, is extremely confident of winning the Congress party nomination for the Velim constituency despite the stiff challenge posed to him by several other senior Congress aspirants.
In a tete-a-tete with GARY AZAVEDO the unassuming sportsperson bitterly lamented the lack of development in his Velim constituency, as he underscores the several development projects that were undertaken by him during his brief tenure between 2012-2017, particularly the sports complexes in the various villages of the Velim constituency.

GOAN OBSERVER (GO): Why do you think you are the best candidate for Velim constituency?
BENJAMIN SILVA (BS): In 2012, people voted for a change and I was elected as their legislator as an independent MLA. Since the MLA had been elected for the last 15 years but had done no development, especially as the basic amenities such as electricity and water were not provided to the constituents.
The electorate sought a change as the electricity poles were laid over 40-50 years back and there were innumerable frequent power interruptions of the power supply, besides the problem of supply of potable water throughout Velim constituency. I had undertaken a lot of development works. Hence, I think I am required for future development!

GO: In 2017 you had contested as an Independent candidate after supporting the BJP government, but lost that elections, why?
BS: The BJP already had a majority since they had their 21 MLAs elected, so I offered the BJP government outside support and undertook various development works. But at the fag end of my term, the people put a tag of “BJP” on me although the BJP had fielded their own candidate for the 2017 Goa legislative assembly polls. I lost only because of this BJP tag although I had undertaken several development works in Velim constituency.

GO: Why did you recently join the Congress party? There are several aspirants seeking the Congress party nomination for the Velim constituency, why do you feel you feel you will be given a party nomination?
BS: They (the other Congress aspirants) are not may not be able win the elections as you are aware that I have contested three elections, losing twice and winning once in 2012. When I first contested in 2007, I had received around 5,200-odd votes, then in the next elections held in 2012 I was elected as the Velim Independent MLA bagging approximately 13,000-odd votes.
In 2017, I again received around 5,000-odd votes although I lost that polls, but I have earned the respect of the electorate as I am a very simple man and I have not deprived my voters but instead done several development works. So you see I have a base of 5,000 votes while these other Velim Congress ticket aspirants have not even contested the assembly elections, so they don’t have any base. Hence, I am seeking the Congress party nomination from the Velim constituency.

GO: What is your vision and manifesto for the Velim constituency in 2022?
BS: The main issue is regarding unemployment particularly employment for the youth. Besides, the education, healthcare and sports fields that need improvement. I also want to save Goa.

GO: Who do you feel will be your main rival in the Velim constituency in the forthcoming Goa LA in 2022?
BS: It is quite obvious that my main rival in the forthcoming 2022 Goa legislative assembly polls in the Velim constituency will be present Velim BJP MLA Filipe Neri Rodrigues, he has been elected since the past two decades. Rodrigues knows how to divide the constituency and rule and get elected again and again.
room at Carxetta-Velim

One thought on “CONG TICKET FOR BENJAMIN IN VELIM?By Gary Azavedo”