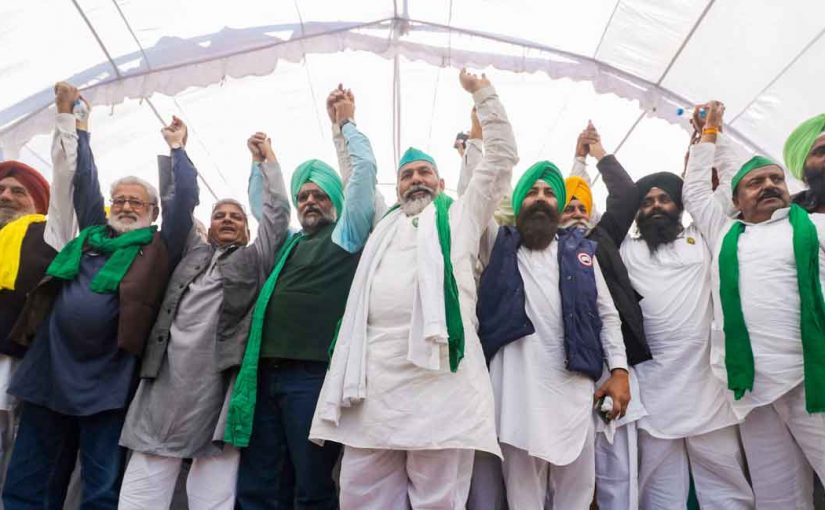 HUMBLED: The striking farmers forced Narendra Modi not only to commit to withdrawing the demeaning farm laws but even made him apologise for the trouble they had to undergo.

While the farmers are happy that Prime Minister Narendra Modi has agreed to withdraw the farm laws, they do not trust him and will continue the stir till the bills are formally withdrawn from both houses of Parliament.

Nachhattar Singh Garewal was among hundreds of farmers who arrived at the Delhi border in November last year to oppose the farm laws.
Though the farmers are happy that Modi has committed himself to withdraw the three farm laws, they intend continuing the strike till they are formally laid to rest in Parliament. “I have not started packing my bags yet,” says Nachhattar Singh Garewal, among the most elderly protesters camping at Delhi’s Singhu border, amid celebrations at the protest site over Prime Minister Narendra Modi’s decision to repeal the controversial farm laws on Friday.
“I am feeling really happy about the repeal…I woke up this morning and heard it from a friend who saw it on his phone and since then we have been celebrating…but until it’s written down on paper we are not going back from Singhu,” says the 85-year-old, wearing an orange turban, two protest badges pinned to his Nehru jacket on a winter morning.
When hundreds of farmers arrived at the Delhi border to oppose the Centre’s farm law in November last year, Garewal, a driver from Ludhiana district, was among them. “I was at the frontline when we first arrived in Delhi. There were tear gas and water cannons being sprayed on us. I kept trying to approach the CRPF and police to ask them to turn it off,” he told Newslaundry.
NEW CHALLENGES
After the farm laws were cleared by the Rajya Sabha in September last year, protests had continued across Punjab for nearly three months, before they reached Delhi. It was then that Garewal used to hop on a motorbike with his nephew Baljeet and travel from one village to another with a loudspeaker, he says. “We used to cover 20-25 villages in a day sometimes. We spoke to people about the laws, about the government, about Modi.”
On November 25, 2020, as a few people from his village decided to join the protesters on their way to Delhi, Garewal left home too, with a few clothes and food. When the demonstrators arrived at the Delhi border to oppose the Centre’s farm law in November last year, they had to sleep in their tractor-trolleys, their mattresses spread out on the road; a swarm of cameras descended on the spot, sloganeering and protest songs blaring consistently in the backdrop.
As the mercury dipped and the capital began to see its coldest days in decades, talks between the government and farm representatives came to a freeze. Tents were brought in, fires were lit and a ration supply was set in place. Then came a scorching summer, with it’s own set of challenges and a raging second wave of the Covid-19 pandemic. But like many other protesters, Garewal stayed behind, his two sons and wife back in their village in Punjab where he has 1.5 acres of land – one acre rented out to another farmer while the rest is used by his son to cultivate wheat and fodder crops.
In the last 10 months, he has only visited home once, for five days. “My wife said that if I don’t go home, she would die…So, I went for a few days, and as soon as she recovered from a heart condition, I came back.”
VALIANT SARDARS
Garewal points out three major markers of his life – the Independence struggle, Indira Gandhi’s assassination and the farmers’ protest. The 85-year-old says he was a young boy during British rule. “But they also left after a while didn’t they? They also heard the protest in the country, didn’t they?” The week after then prime minister Indira Gandhi was assassinated by her two Sikh bodyguards in 1984, Garewal remembers he was driving a truck in Maharashtra. Everything was tense, anti-Sikh sentiments were at a high and riots had begun, he recalls. “When my conductor and I reached Aurangabad, I got off the vehicle at a petrol pump. People were looking to attack Sikhs everywhere. I removed the Guru Gobind Singh picture from the truck and asked my conductor to take over. I hid around a cotton field for three days. Then I managed to make my way to a hotel but they didn’t allow me inside. They told me ‘Indira Gandhi was murdered by your people. You have to leave. We won’t be safe if you stay here’. I was scared.”
From there, Garewal says that he and his conductor drove to Malegaon, where “I removed my turban, paid Rs 100 and got my beard shaved. The conductor, who was also Sikh, refused to cut his beard or remove his turban. He got thrashed later on.” The octogenarian says he then landed in Nagpur to return the truck to its owner, and went to the railway station to buy a ticket to Punjab. “But at the station, the police told us that we could not travel to Punjab…I somehow took a bus and went home,” he recalls. As things calmed down, Garewal resumed life as normal but the experience left an impact; he felt small. “We were hated by the country. The Jan Sangh people had followed me too. They wanted each of us dead”.
While Garewal does talk about the repeal of the three farm laws, for him, the farmers’ protest and being at Singhu border has also been about being seen, of owning up his Sikh identity. “I like it here. There’s a sense of pride, a sense of community,” he says. Each day, Garewal gets up at 4 am, spends time in the community kitchen, prays a little, eats breakfast and makes his way to the massage stall nearby.
And in all these months, he has seen the site change through seasons, acquiring a life of its own. “There is a girl who was born here; she comes running to me and hugs me every morning just as I finish my prayers. It makes me happy. I am alive here.”