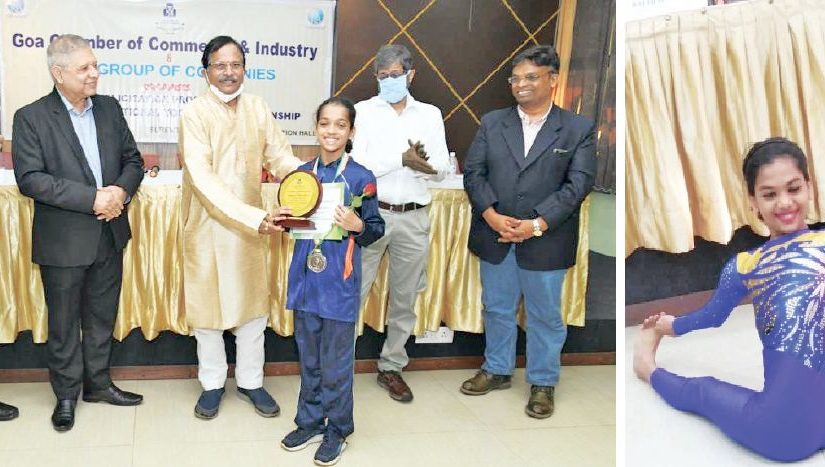 The Goa Chamber of Commerce & Industry felicitated young Goan yogasana winners at the 2nd National Yogasana Championship held in Bhubaneshwar, Odisha from Nov 11 to 13, 2021 at its Surendrababu Timblo hall in Panaji on December 18, 2021

ONE thing one must thank Prime Minister Narendra Modi for is his efforts make yoga count for something not only in India amongst the younger generation, but also across the world in engag-ing sports-oriented ways. Indeed, since 2015 (when the world’s first Yoga Day was celebrated) yoga has steadily become one of sporting events in championship competitions. I realized this when one of the parents present at a recent felicitation function of several young Goan yogasana champions at the GCC, quipped, “Our children in India learn karate and judo which are Japanese arts … now we in India have yoga which is our very own!”
If there’s one thing which is making the country proud it is the promotion of yoga not just as a spiritual science, but an all-round wellbeing practice for all ages, as also something challenging for young yogasana practitioners to excel in sporting events. Watching a short demonstration of yogasana by the five winners, all girls in the age group of nine to 14 years, was an enlightening moment!
The girls learned yoga at the Jyotirmaya Yoga Seva Mangal Prasthistan in Porvorim which teaches about 150 children into the correct ways of doing yoga at its four centres across Goa. There was Aashnee Bhat Sanmalkar, 13, from the People’s High School in Panaji. Her mother Kirti was there amongst the parents present for the felicitation function and to a query she shared, “My daughter was going for a gym summer camp and the coach there noticed how very flexible she was and so introduced her to doing yogasana. In the first six months along she got selected for the National championships which sees the sees the country’s top 20 yoga champions….”
She said there is no reason why yoga should not be considered as a sport to excel in like any other sport. The championships are sponsored by the National Yoga Sports Federation and according to her daughter who’s just 13 years the hardest yogasana to do are the hand stands! But their family is familiar with the practice of yoga, “My mom does yoga religiously and she doesn’t look her 74 years. Yoga people really look young! Now my daughter Aashnee dreams of being a doctor in the army someday to teach yoga to the defence folk some day!”
Then there was Neena Kamat Dharwadkar daughter from Porvorim, her mother Kamakshi said her daughter too started off with gymnastics and she was trained into yogasana practice by her coach Daul Vatar who is a senior coach at the Jyotirmaya school and one of the best gymnastics and yoga coach in Goa. He studied from the CNIS in Patiala, one of the country’s top-notch sports coaching institutes. Young students after doing all the training do need a platform to perform for their talent to be recognised and they constantly need some pushing from parents and coaches and with the government promoting yoga in a big way there are career opportunities for the young today as yoga professionals.

KING OF THE JUNGLE?
Felicitating the yogasana winners were chief guest Union Minister for Tourism, Ports, Shipping & Waterways Shripad Naik and keynote speaker, Dr Kedar Padte, who quizzed the students with a few questions like “Who is the king of the jungle?” and “How hot is the sun?” The truth to the questions being we’re all alive and connected to one another materially and immaterially; alas we human beings are just brought up conditioned into ways of thinking we could well break free from… to see how much happier a world without borders is!
Confessed one of Goa’s most prominent “baby doctors”: “I love to live the yogic way of life! ” Yoga, he added, is not religious practice but something to link us to “a cosmic oneness….we are all related and yoga teaches us we are all one in the world.” The world was one till it divided into countries from 50 to 200 to 500 to become today’s divided world. In a stressed out world, he added, we should practice yoga like a mantra, doing it correctly and “not just for competition but to eventually get to arrive at a guru mode of consciousness!”
Altogether it was agreed by all speakers present, including GCCI’s President Ralph De Sousa that yoga is the art of living, it helps to calm the mind and contributes towards general wellbeing. Present amongst the gathering was Medha Salkar who reportedly is an ardent yoga practitioner and able to do 100 Surya-namaskar in one go. She shared, “The girl’s body is naturally far more flexible than the boy’s body which is stronger. So when we do yoga from younger years our body remains flexible and problems are fewer!” All in all the message going out loud and clear is do yoga and fit and fine through life.