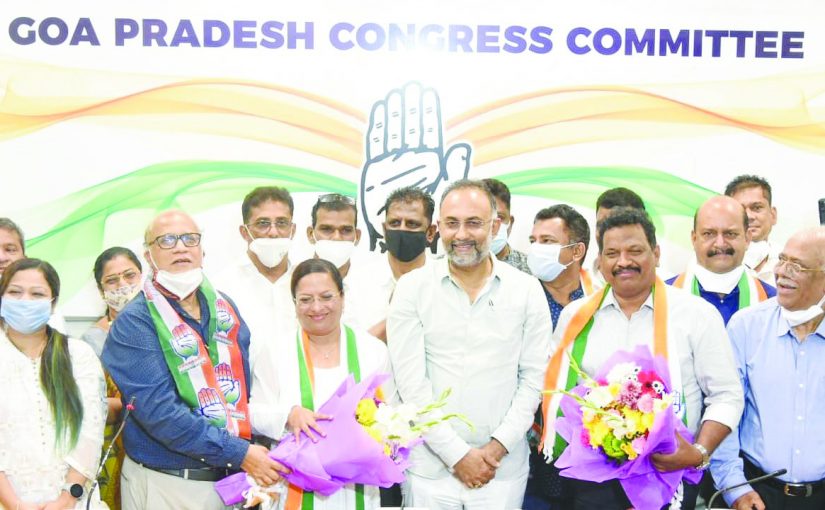 IN THE CONGRESS BAG OF BJP QUITTERS! It was a red letter day for the Indian Congress Party in Goa when it inducted former BJP MLA of Calangute Michael Lobo with wife Delilah into the Congress family at a ceremony held on January 11, 2022. Welcoming the couple with a flower bouquet in the picture along with others are former chief minister and Opposition leader Digambar Kamat, current AICC in-charge Dinesh Gundu Rao, sarpanch, supporters and ward members of Calangute and Siolim constituencies.

THE examinations conducted by the Education Board or universities is a test for students, whereas the election is a challenge for leaders. Coronavirus infections have wreaked havoc in the country. The Central Election Commission has said “Elections will be held in 5 states.”

How can elections be more important than human life? Everyone knows the saying, “Sir salamat to pagadi pachas.” In my opinion health care should be a first priority. This is what the Central Election Commission should understand. It has given permission to five people for door-to-door campaigning. It is wrong to allow door-to-door campaigning! Please revoke the permission.

Also, in this electoral process of five states voters make up around 18 crore and elections will be held for 690 seats. This is a big process. What happens when you go through it? This will make sense in the coming days.

THE BJP government in Goa is in a debt trap of Rs 23,000 crore which means that the per capita debt for 15,00,000 population is Rs1,53,000 – almost  five times that of another BJP ruled state, Madhya Pradesh, which has a total of Rs2.56 lakh crore debt, translating into a per capita debt of Rs34,000 for its entire population.

As per conservative estimates the Goa government employs one in every 22 persons in government jobs. This means that about 70,000 persons in Goa have government jobs, and if you assume that the average salary of a government employee is Rs 25,000 per month, Rs2,100 crore are spent on salaries annually. Twenty-one in 22 people in Goa have private jobs which normally pay lesser salaries.  Also with the price of petrol at Rs95 per litre and domestic LPG cylinder costing almost Rs1,000 and during the pandemic no subsidy was being credited…add to this the price of vegetables, fruits, pulses, lentils and cooking oil and a sharp rate of inflation is staring us in the face.

The average family is in a very tight spot even if they get Griha Aadhaar aid as inflation-related subsidy. Goans must vote for a party in this forthcoming elections for a party which make life easier for the common people and no khaas aadmi who don’t need any aid. The Goan economy is being kept afloat with a heavy debt only because at the Centre there is a BJP government.

Please elect a government in Goa which stand up for Goa and Goan interests. Goans need to stand on their own feet and be self-sufficient through judicious governance, so that through State GST collection and efficient and effective services provided by the government, this small state may be atmanirbhar!

BRIBES are just not exchange of cash for favoRS. They are more encompassing than this. Parrikar had filed criminal cases against then Congress MLA Mauvin Godinho and later dropped them when he joined the BJP. Result: Goa’s exchequer lost substantially at the cost of gains by the former twosome.

TMC/AAP are targeting the BJP job scams: Where a select group is allowed to “bribe” the ministers for jobs. AAP says if it comes to power Goa will have a  corruption-free government. Yet even before elections both parties are resorting to bribing! They have “purchased” from the Congress. They are bribing the electorate with freebies like free electricity, free doles, etc, giving their schemes fancy names such as Griha Lakshmi and such.

But bribes have deeper repercussions. Now that  leaders have been poached, they are forced into silence regardless of what their outstation High Commands decide. They have given up all rights and will compromise on all issues regarding local issues. They cannot even protest in their own language! See how now TMC/MGP is giving away land to anyone they want: Tenants living in Goa  in 1976.

Givers and acceptors of bribes surrender everything. A sword hangs over their head on every issue. The “favour”’ earned/sold is not the only item traded: It is your soul!


AN84 years old former postmaster from Madhepura (Bihar) claims to have got jabbed 11 times with covid vaccines using the same Aadhaar and mobile numbers nine times! According to him the vaccine not only protected him from covid but also cured him of many ailments. He was caught attempting to get his 12th dose and a police report filed charging him with various offences.

What about action against health centres and doctors who administered him the vaccines? How did the much appreciated CoWin app, fail to recognise out of turn repeats by the same person?

In 1990 there was a National Award-winning movie, “Ek Doctor Ki Maut” (Death of a doctor). The protagonist develops a vaccine for leprosy but is ridiculed by colleagues and the government, and transferred to a remote village. Later he is shocked to know that two American doctors were credited for discovering the same vaccine! This storyline is tweaked from a true case of a doctor in West Bengal who pioneered in vitro fertilisation around the time a doctor in England was carrying out similar experiments.

The Indian government must constitute a medical panel to confirm the veracity of the Bihar man’s statement. Is it a medical conundrum or factual to an extent that his ailments got cured? Perhaps there is some serendipitous explanation for the Covid vaccine to have worked favourably in the case of some diseases (say diabetes). Let India not lose an opportunity for the next Nobel Prize in Medicine!

THE Chief Electoral Officer (CEO) has reportedly taken cognisance of the Catholic Association of Goa (CAG) appeal seeking necessary steps to ensure peace and security during the on-going novenas and the Feast of St Joseph Vaz at Sancoale, scheduled on January 16, this Sunday.

A member of a right wing organization is circulating a video sternly instructing Archives & Archaeology employee to stop the novenas and Feast of St Joseph Vaz at the frontispiece of Sancoale Church, or face dire consequences.

With the exception of Churchill Alemao no other minority leader has bothered to condemn or ask for the arrest of right wing persons out to create trouble and disturb communal harmony in Goa, why?

Luckily a local Hindu brother from Sancoale has  filed a police complaint at the Verna Police Station against the trouble-seeker and  demanded his arrest for instigating Hindu-Christian religious disharmony in Sancoale. When the police arrest innocent Goans on mere suspicion why not this person disrupting the annual traditional feast of St Joseph Vaz at Sancoale by even using violence? Is he above the law just because he happens to be the leader of a BJP-supported right wing organization in Goa?

Chief Minister Dr Pramod Sawant, instead of  wasting time discussing PM Narendra Modi’ so-called “security breach” in Punjab should look into this matter on a top priority basis and direct the police to immediately arrest the person for sedition. This would warn others to stop playing dirty communal hate politics to destroy Hindu-Christian unity for political gains!

BJP OUT OF CONTROL!

IT is now clear that the BJP is out of control and has lost its way miserably. Its weird diktat to Manohar Parrikar’s son Utpal Parrikar that he should first put in some work years for the party, before seeking a nomination to contest the Assembly polls, is clearly double standards. If in 2019 the late Francis D’Souza’s son could be selected, why not Utpal now. Is this  selective deviation in BJP party policy? The BJP should realize today’s young politicians are  better equipped to perform and deliver than their greyhorns!

On family Raj it also cannot be pick and choose. The policy has to be uniform with no exceptions whatsoever. If family Raj is unacceptable to the BJP, how is that Chief Minister Pramod Sawant has gone overboard in lobbying for the Mayem seat for his wife Sulakshana? That her fate was forecast is another issue.

While in the Opposition the BJP had  managed to get the then minister, Dayanand Narvekar, to resign after he was charge-sheeted, but it is  now allowing awefully tainted persons like Babush Monserrate and Mauvin Godinho to contest, despite the fact that both are facing much more serious criminal charges. Is this not  double standards?