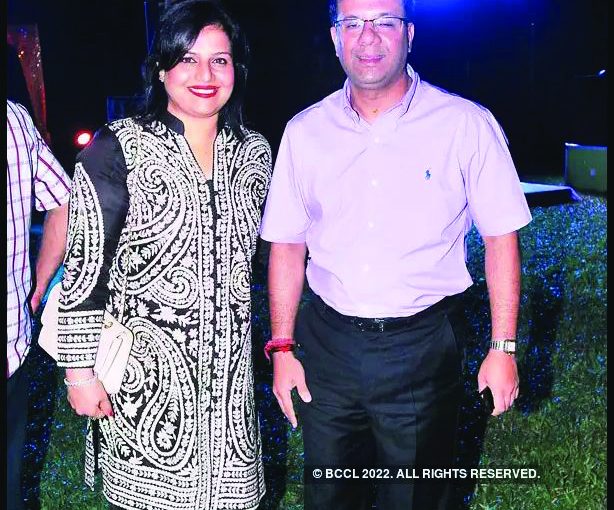 BJP COUPLES! Reviewing their policy of limiting tickets for the Assembly Elections to only one member of a family, the BJP High Command has now happily given tickets to several couples, including (above) wife of Health Minister Vishwajit Rane, Dr. Divya Rane. Other couples include Jennifer Monseratte, wife of Babush Monserrate, who has been given the Taliegao ticket, while Babush holds on to Panaji ticket.

TO prevent splitting of votes the Opposition Congress, TMC, AAP, RG and other small-time parties can still unite! Even after they have declared their candidates by resorting to a strategic withdrawal of nominations in favour of the consensus candidate. If the four opposition parties are going to field all 40 candidates, they can still zero in to only consensus candidates proportionately, so as to get equitable representation.
One hundred and sixty candidates can then be narrowed down to 40 candidates. The reasoning is that if all four opposition parties have a total vote share of 60%, then if they go separate ways, spitting of votes will give the BJP just 40% of the vote share, an initiative, which should under no circumstance happen. If each of the above parties have 20-%, 20%, 15% and 5% vote share, they will be handing the BJP the initiative on a platter.
Until today due to the anti-incumbency factor, a united opposition stands a distinct chance to win, but splitting of votes will definitely hand over the initiative to the BJP on a platter. The 120 candidates who withdraw can later be given their due by choosing them to head corporations and other plum posts for their support. In this manner, the united opposition can come to power and surely defeat the BJP at the hustings.
— Elvidio Miranda, Panaji
SERAULIM TRAGEDY
THE Seraulim tragedy where two young constables lost their lives while on duty brings to mind the necessity of following rules. The government quickly announced ex-gratia payment of Rs1crore to next of kin besides jobs in government service.
I urge the GHRC, DGP and the Governor of Goa to re-visit the tragic death of a scooterist at Nuvem, last year. A roadside tree being cut by the PWD came crashing down on a scooter driver and killed him. This is pure negligence on the part of the PWD — no matter the job was outsourced — and the police failed to ensure proper safety measures.
This death should not have occurred. And should not the same criteria be applied in this case and ex-gratia be given to the deceased’s kith or kin? In the Seraulim case the negligence should be investigated so that such things do not repeat. Barricades cannot be erected overnight without due notice to the public and with correct safety measures put in place to prevent accidents. Accidents occur when two “mistakes” happen at one time. The usual drunken driving is not excuse and may not be the reason at all.
— R Fernandes, Margao
TEMPLES OF EDUCATION
JUST as schools were recommencing after a very long break, now on account of the third wave of the covid pandemic, students’ hopes for a restoration of classes are shattered. They are shunted back into distance learning by way of online classes.
Nothing can replace classroom education and the role our teachers play in molding the future of students in the temples of education, and for that we always need to remember our teachers with gratitude.
Good teachers make a big difference to students’ lives and leave a lasting impression in the classroom. Teachers are more than mere educators. They also play multiple roles as friend, counselor, mentor and this is needed especially in the challenging times students face today.
Memories of our dear teachers linger forever. A regular teacher may merely direct us along the right path, but great teachers inspire and challenge us to carve out our path in life. Teaching is the one noble profession that creates all other professions.
Remain humble and beholden to all our dear teachers who imparted their knowledge and guidance and helped us immensely throughout our lives.
As Henry Brooks Adams, historian and politician, once observed “Teachers affect eternity. No one can tell where their influence stops.” And Bill Gates accurately opined that technology is just a tool. In terms of getting the kids working together and motivating them, the teacher is most important!
— Aires Rodrigues, Ribandar
POOR REGINALDO LOURENCO!
THE Congress Committee has finally announced Moreno Rebello as the party candidate from Curtorim constituency, thereby shutting all doors for three times MLA Aleixo Reginaldo Lourenco. This is because he behaved like a politically immature fool and confused his own voters by indulging in the most outrageous act of defecting to the Goa Trinamool Congress.
The Congress is absolutely right in not taking him back. There should be no re-entry for backstabbers and that too after he had got a ticket to contest the election. Despite this he shamelessly joined TMC at the behest of his so-called “supporters.” Reginaldo Lourenco is now saying that Moreno Rebello has ties with the BJP in Goa!
Close ties with the BJP or not the voters of Curtorim should decide for themselves. Reginaldo Lourenco is free to contest as an independent, but he should stop blaming for anyone. He listened to bad advice from rival political camps and dug his own political grave! “Atham Bappai Nham, Anim Pudveim Nham.” Even a miracle cannot save your Reginaldo baba. Thanks for being a true voice of all niz Goenkaars in the Goa assembly for the last 15 years and God bless.
— Jerry Fernandes, Saligao