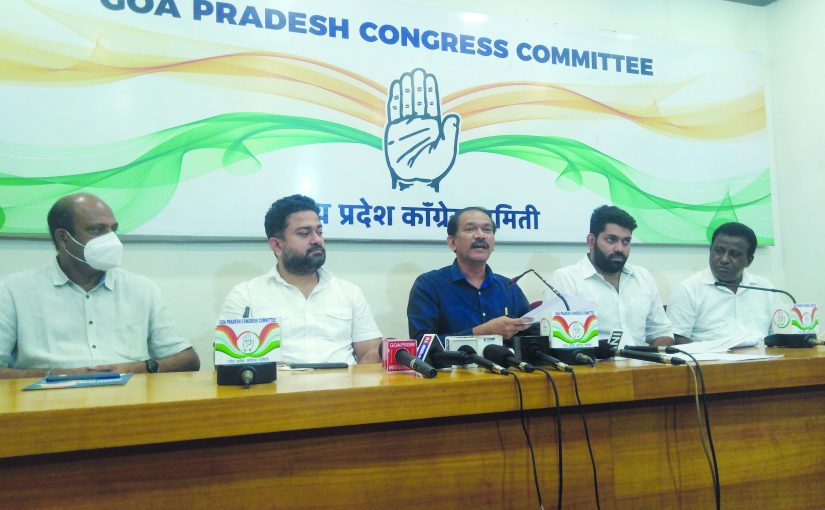 HIGH COURT IGNORED ECI ROLE IN DEFECTIONS CASE: Says GPCC president Girish Chodankar in a press conference, “Voters vote for a party’s ideology and not candidate!” So defections make nonsense of the entire elections process and betrays the voters’ mandate. Others in the picture are John Nazareth, Varad Mardolkar, , Himanshu Tiverekar and other Congress office bearers.

‑Says capitalists can take over Goa

GPCC President Girish Chodankar missed his vocation. Apart from being a politician of the very best kind, he could well be an advocate for right over might in governance! The Congress president, speaking to media people on Sunday urged media people to sit up and take stock of what actually transpired at the Goa Bench of the Bombay High Court on February 24, 2022 when the learned judge upheld the Goa Assembly Speaker’s order dismissing two petitions seeking disqualification of 12 MLAs who joined BJP in 2019.
The GPCC President Girish Chodankar stated that the order of the High Court with regard to disqualification of the ten MLAs in this case has given license to “open defection and in future any capitalist will be able to form political parties and get 2/3rd MLAs without contesting elections and will take control over Goa and the nation.” For example, we may look forward to an Adani Janata Party or an Ambani Janata Party or a Jindal Janata Party, if politics is reduced to just a mere matter of buying MLAs who have won in the elections! And in fact, that is what has been happening in Goa wrongly but condoned by the politics of the times – and it would seem even our courts of justice!

INDIAN CONSTITUTION
MR CHODANKAR argued that the basic concept of the Indian Constitution which defines the democratic process is under attack, with the interpretation of the Anti-Defection Law by the High Court, virtually permitting or legalizing “horse trading” in the House. The Goa Bench of the Bombay High Court on February 24 in his verdict had upheld the Goa Assembly Speaker’s order dismissing two petitions seeking disqualification of 12 MLAs who had joined BJP in 2019.
Chodankar says that while he respects the order of the High Court the people of Goa must see how this judgement raises many valid questions which need to be answered — either by the Supreme Court or Parliament must take a call on it. Present at the meet to brief media people with Girish Chodankar were Youth Congress president, advocate Varad Mardolkar, John Nazareth, social media-in-charge Himanshu Tiverekar and others.
Said Mr Chodankar, “Congress party will never allow a wrong precedence to be set as it is not just a matter about Goa but it is all about the democratic fabric of our country based on which the governments work. We will fight against such defections,” he concluded. He added that through RTI, filed before Election Commission of India, it was clear that the aforesaid merger had not taken place as the Congress Party in Goa was and is still existing, “But the Hon’ble High Court upholding Speaker’s order endorsed the merger.”
The ruling party will read order as a license to open defection, which is very dangerous; if this order continues the 10th Schedule of the Constitution (Anti-Defection Law) may be called as the Law for Defections from henceforth. Citing the example of former NCP MLA Churchill Alemao, who merged the party into TMC and became their MLA, Chodankar said that TMC though, didn’t participate in the 2017 election process, but had an MLA in the Assebly before the term of the assembly ended.
So in future, he concluded, we may well have an Adani Janata Party or an Ambani or Jindal Janata Party, “All they will do is buy 2/3rd of the MLAs without contesting elections and form governments! They will be free to do whatever they want. Nobody can stop them.” In the long run this will further frustrate voters in the country who may decide elections and voting are a waste of time if not meaningless. When people vote for a candidate of the party it is the ideology primarily they are voting for, but if one party’s MLA can hop into another party’s MLA pre or post-elections it means ideology has gone for a toss. There is no ideology left except that of monetised bargaining! In time to come this will frustrate voters who have faith in the democracy which when properly practiced gives all parties a level playing field to play a role in improving the quality of the infrastructure and lives of the people of a nation no matter how humble.

TENTH SCHEDULE
GIRISH Chodankar also claimed that the tenth schedule doesn’t empower the Speaker of the Legislative Assembly to merge political parties, “I challenge them to prove it. It is domain and mandate of Election Commission of India to merge the parties and not speaker of any assembly. He gave the example of “Merger of Haryana Janhit Congress with INC, in which the ECI had to engage in a process to recheck the merger by contacting counterparts of State, which has not taken place in Goa as only Speaker decided on merger. The same process was adopted when Churchill Alemao and Alexio Reginald had merged Save Goa Party with Congress as they had approached ECI, who heard the other members of party and then gave judgement.”
In the light of all this the order of the High Court was very casual as it records that Goa Forward party argued in favour of defected MLA and that tenth schedule is for granting protection and not disqualification. According to the Congress president, “Actually advocate Lawande representing Goa Forward Party had argued that they support case of the Petitioners and that respondent MLAs should be disqualified.”
Chodankar declared that the process to challenge the High Court order in the Supreme Court has been initiated for this is an important matter needing the enlightenment of careful judisprudence. He appeals to all parties to fight the order for the existence of political parties and democratic norms. How seriously the ruling party takes all this is of course a matter for conjecture in the light of the fact that it has not so fare had any qualms playing dirty to hang on to power by hook or by crook — to hell with what the voters’ mandate!

One thought on “CONGRESS PRESIDENT APPEALS FOR FAIR PLAY!”