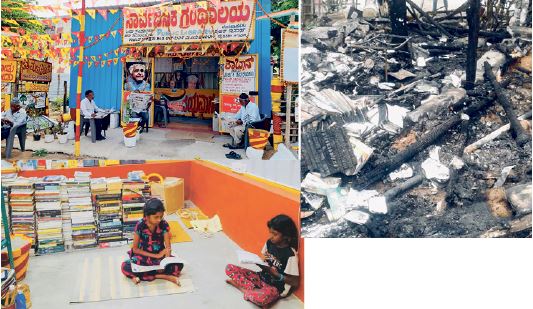 The story of a humble library in Mysuru started by one Syed Issaq … miscreants burnt it down, but it rose again for the benefit of those who like reading! Here is an inspirational story like no other.

The charming and heart-warming story of how one man persevered in restoring his burnt down library in Mysuru in Karnataka…while citizens fall prey to communal machinations one Issaq just continues to bring people together in his humble library!

ON April 9, 2021 at around midnight, Syed Issaq, a popular face amongst the residents of Rajiv Nagar, Mysuru, woke up only to be told by his neighbours that his library was burning up in flames. By the time he reached the spot nothing remained except a few flickering flames and ashes.
Who is Syed Issaq? He owned a library which he had built with his savings. He was born in Ganjam, near Srirangapatna. He left his village while still a boy of eight years of age to work on casual daily wages as labourer, coolie and doing sundry odd jobs coming his way.
How did the idea of a public library come to him? The library itself owes its origin to a newspaper article when one day, Issaq, during a break from work, chanced upon film star Rajkumar’s photograph in a newspaper. As an ardent fan he immediately went and bought a copy of the newspaper.
“I took someone’s help to read the article since I am an illiterate,” he confesses, “later, I realised that one news story was heard by four others. This inspired me to provide newspapers to those who liked reading newspapers!” With that first effort Issaq soon got into the habit of collecting newspapers and keeping them for reading at his place and this drew a lot of accolades from locals.
Then in 2011 he used a portion of his income from cleaning drains and doing other jobs to set it up a library on a 20×20 feet space at a corner of a park near his house, in a small tin-and-bamboo shed, only intending to ensure that people learn, read and speak — and not face the same problems of being as uneducated as he was!
Dr Rajkumar and Kuvempu are his idols. He feels their movies and poems were life lessons. He says, “If you build a small space, lay a cloth to pray, regardless of whether it is a masjid or temple, people will come to pray here. Similar with books. You keep a book on the table, the same book will have many readers. People will get knowledge, they will share it with others and there is nothing bigger in this world than the knowledge that is shared.”

NEWSPAPERS SERVICE
ISSAQ wanted his little library to be a service that everybody has access to. He would even spend Rs6,000 each month on its upkeep, he had eight newspapers in multilingual languages so that more folk would come and read every morning and go off to work afterwards. Visitors too walked in with any book or newspaper they wanted to read – and in a pioneering effort all reading for free of cost.
Now we come to how the library caught fire one early morning! Issaq’s dream project turned to ashes on April 9, 2021 when a man walking by carelessly tossed a cigarette butt. Says Issaq, he had painstakingly collected 11,000 books in all including religious books (Bhagavad Gita, Quran, Bible), multilingual books, novels…collected over the years, the library was a blessing for many in the neighbourhood. But after the fire more than 80 per cent of his stock of books and newspapers in Kannada were destroyed.
An FIR was registered. Police sources said they suspected local toughs who had twice tried to shut the library down. While responding to queries Issaq confessed, “I used to cry every single time remembering that night when my library of books turned to ashes…” It was undoubtedly arson inflicted by someone.
What is life like after the library burned to ashes? Well, what happened to Syed Issac is that the news spread around and invited much sympathy even nation-wide! Many people came forward to help him restore his library anew. So for the love of Kannada and in high spirits, he rebuilt a shed-like structure for his library in 45 days. Says Syed Isaac, ‘Knowledge is everything. They might have burned the library but not my dreams. If the library was burnt a hundred times, I would still rebuild it!”
By then many groups and citizens were involved in his dream project and donated practically in cash and kind to help him restore his library. Someone from the local government establishment even promised to execute the whole project for him but it never came through although a year passed. After waiting and waiting Issaq finally decided to rebuild the library on his own with the help of a Rs4 lakh donation.
Issac keeps saying that he was unable to go to school, nor could afford to send his own children to school beyond primary school. Quite simply he does not want other children to suffer a similar fate as his and so he dreamed of a library for all young and old to use as they wished to educate themselves.
As a proud Kannadaiga, Issac says, ‘Kannada dalli odd beku, Kannada dalli bari beku, Kannada dalli maataad beku!” (One must read in Kannada, write in Kannada, talk in Kannada!)
Today his old library has gone with the wind but a new humble library stands to tempt folk to drop by to read and talk to each other if they wished. After his first library was burdened he got recognition from around the country’s corners and so with help from here and there and patience, faith and hope – Syed Issaq’s library stands tall and proud at the same place as before.
NEW LIBARARY!
ON Republic Day on January 26, 2022 he invited students from a nearby government school for a low-key inauguration of the new makeover library. Several known and unknown people including Pratap Simha, Suttur Mutt seer Shivarathri Deshikendra Swamiji and others graced the inauguration. Afterwards, Issaq expressed his happiness. “I am glad that I could rebuild it. I hope that this serves the purpose and no one is deprived of education and learning no matter which religion they belong to. I also hope public libraries become instruments of change — not luxuries, but rather necessities, important institutions — as vital to the community just as fire stations, community centres or public schools.”
The library attracts about 150 regular visitors every day with most of them wanting to read the daily newspapers. From 8 am onwards people are immersed in reading newspapers by the roadside. A dozen newspapers hang on a string pegged on to two trees. It matters not to Issac whether his readers are Hindu, Muslim, Christian, Sikh, Buddhist or anyone however rich or poor. He is only overwhelmed by the fact that his readers seek and get whatever knowledge they seek and need.
India is a garden of people from all walks of life and books must be a common and free medium to bring everyone together!