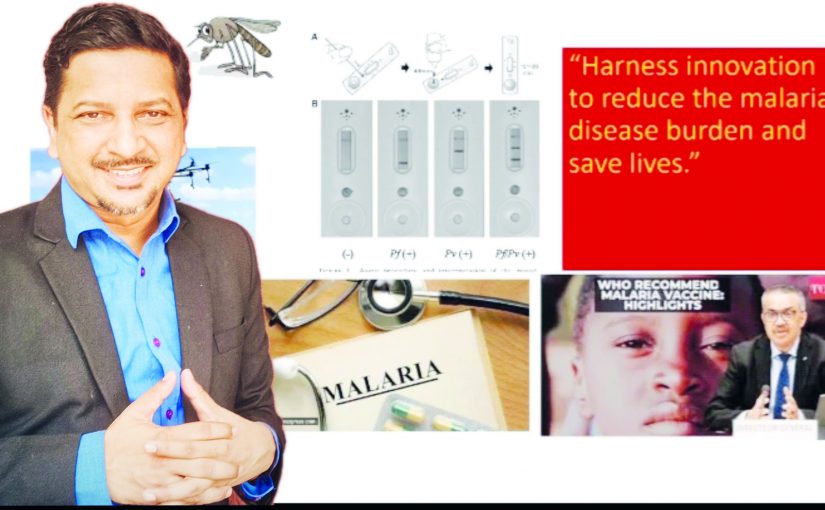 On World Malaria Day, April 25, the Goan Observer caught up with DR AMIT DIAS of the Department of Preventive & Social Medicine at Goa Medical College & Hospital, to know more about the latest buzz around malaria, innovation and saving men, women and children dying from malaria…

GOAN OBSERVER: What is the key message this World Malaria Day?
DR AMIT DIAS: April 25 is observed the world over as World Malaria Day. The theme this year is “Harness Innovation to Reduce the Malaria Disease Burden and Save Lives.” The day is used to attract the attention of Policy makers and mobilize the community to encourage action, to reduce the suffering and death caused by mosquito bites, malaria and other consequent vector borne diseases. We have been making significant progress in the fight to end malaria and the Government of India is committed to Eliminating the disease by 2030. The theme this year stresses on INNOVATION to come up with better drugs, better diagnostic tools, better vector control measures and better vaccines for the control of Malaria. In 2021 the WHO launched a vaccines against malaria called the Mosquirix- RTS, S/ASO1 vaccine, which has been given to millions of children in Africa where the disease impact and mortality is very high. It is innovations such as these that bring in a ray of hope and a sense of optimism.

GO: How big is the problem of Malaria?
DOCTOR: According to WHO there were around 241 million cases of malaria in 2020 in the world which led to more than six lakh deaths. India is committed to eliminating malaria by the year 2030 and is a signatory to the National Framework for Elimination of Malaria (NFME). The good news is that a total of 124 districts in India have reported ZERO cases of malaria and there has been a decline up to 86% in the number of cases, a 79% drop in the deaths in 2021 as compared to 2015.
Goa has made significant progress with respect to the management of malaria. Both the districts in Goa have an Annual Parasite Index of less than 1. The credit goes to commitment from the government of Goa and persistent hard work of the teams at Directorate of Health Services and the Goa Medical College. Last year we had less than a 100 cases of malaria in Goa. One may attribute largely to the decrease in the influx of labor due to the Covid-19 lockdowns and shut down of construction sites. All the same, the incidence has been decreasing even before the pandemic. Global warming is also having an impact and shifting the pattern of malaria in various parts of the world.

GO: Is there treatment for malaria?
DOCTOR: Yes indeed! Malaria is treatable and curable. However, one needs to go to an appropriate health facility in time for diagnosis and prompt treatment. Assume ALL FEVER IS MALARIA UNLESS PROVED OTHERWISE. Delay will lead to the multiplication of the parasite in the blood and will cause complications. The drugs available at the moment are very effective and are available free of cost at all Primary Health Centers in Goa. Appropriate blister packs are available even for children for ease of administration of the medication. One needs to take the treatment as prescribed and COMPLETE THE COURSE or else there can be a relapse of malaria as some of parasites tend to remain dormant, specially in the vivax species. Drug resistance is a major problem in the fight against malaria. On has to be very careful in prescribing and taking the medications.

GO: What causes malaria?
DOCTOR: Malaria is caused by a parasite called plasmodium which is injected into the blood stream through a bite by the infected female anopheles mosquito. Why female? Because the female mosquito needs the blood for the maturation of its eggs. There are various types of malaria, but VIVAX and FALCIPARUM are the most common species found in India. Falciparum has been the one associated with more complications, but recently we have also noticed complications with Vivax malaria. So the bottom line is to be careful and fight the bite.
Contrary to what people often think, the malaria mosquito breeds in clean stagnant water. Water that collects in your garden and backyard in coconut shells, broken buckets, tires, vases, sumps, overhead tanks, etc. If we have to fight malaria we need to do what is called SOURCE REDUCTION. We need to empty all the potential breeding sites for the mosquito. We need to observe Dry Day – this is not the “dry day” as we know it in our state, but it means everyone should work at emptying out all the paraphernalia around which has fresh as well as stale water stagnating in it…empty coconut shells, broken plastic container and even the flower pots which do not drain away water properly at least once a week, this will interrupt the life cycle of the mosquito and prevent its spread.
Besides these physical methods there are chemical methods like fogging and biological methods like the release of a certain species of mosquito larvae eating fish in wells and water bodies is also helpful in certain situations. The monsoon rains will arrive any one of these days prematurely or on time and this is the peak malaria and other vector borne diseases which can take a toll on life in children, seniors and adults. It’s best to start cleaning up right now, don’t wait. Get in touch with your local CCP councilor to initiate a clean-up of the area in which you live. Then you may sit back and enjoy the monsoon rain

What are the Symptoms of Malaria?
The common presentation is Fever with chills and rigors. However it may also present with other symptoms
If we have to fight Malaria, the private practitioners, the and community at large should join hands and join the war against this killer disease. Every case of Malaria should be notified to the Health Services so they can be followed up and appropriate action can be taken with regards to treatment and environment control. The Panchayat and Municipalities need to ensure that the environment is clean and people are educated to Change Behavior to improve health – Swachh Bharat, Swasth Bharat is not just a slogan!! It can only be achieved if the community at large joins in the fight against Malaria.
We need to RAISE OUR VOICE to alert everyone regarding the URGENCY and at the same time share the OPTIMISM that we can achieve the Goals if we JOIN HANDS and ACT NOW.

Dr. Amit Dias is faculty at the department of Preventive and Social Medicine at the Goa Medical College for more than two decades and has Completed his Diploma in Tropical Medicine from the London School of Hygiene and Tropical Medicine, UK. He has been involved in research on various tropical Diseases of importance in Goa such as Japanese Encephalitis, Scrub Typhus, Malaria and Rabies. He is also author of the book Major Tropical Diseases: Public Health Importance!