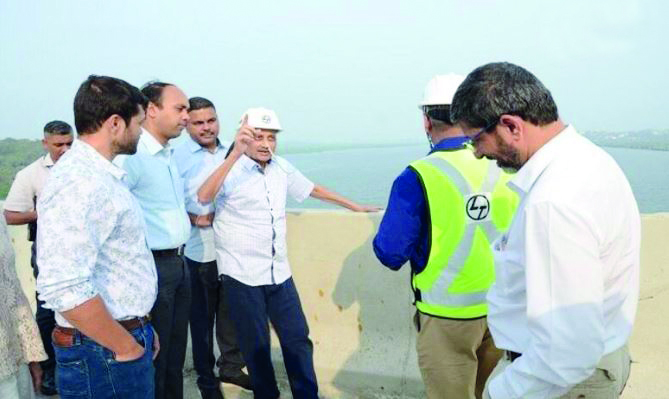 JOSH NAHI HAI! The Atal Setu which was full of josh when former Defense Minister Manohar Parrikar inaugurated it, has quickly lost all its hosh.

HC Petition
AND a few stray thoughts on the observations of the Goa bench of the Bombay High Court on potholes up and down the highways of Goa. In response to several petitions, the Goa bench of the Bombay High Court has specifically directed the National Highway Authority to repair all the potholes on highways and roads from Margao to Patradevi. This is symbolic as Patradevi is one of the major landmarks of Goa’s Liberation movement. It was at Patradevi that thousands of Indians from Pune tried to crash the border and were shot at mercilessly by Portuguese soldiers. It is not just the Nation Highway from Margao to Patradevi which is full of potholes but even from the Atal Setu to Mapusa, this is undoubtedly a disgrace to the memory of both Atal Bihari Vajpayee, the first BJP prime minister, and former defense minister, Manohar Parrikar. Atal in Hindi means “firm” but the high Atal Setu bridge over the Mandovi river is nothing but firm.
Read the regular posts on social media and the news about the number of accidents taking place on the Atal Setu bridge. On May 8 May, 2022 six vehicles were part of a fender-bender, with one car climbing up the median and knocking down a street light. The driver of the car in front braked suddenly to dodge a deep pothole coming up quickly on the bridge (traffic maintain 60 kph plus). The following day itself, yet another car lost control on a curve and smashed into a street light. All drivers escaped with minor injuries.
There have been three accidents on the Atal Setu bridge in the past four days. This is a serious threat to passengers travelling on Goa roads. The problem is not of funds. The primary reason why the potholes keep recurring is because of the incompetence or indifferent attitude of contractors entrusted with the job by the National Highways Authority. It may be recalled what a horror the Dona Paula bypass road was hardly a year ago.
In other parts of the country it is rare to see potholes 365 days a year as Union Minister for National Highways Nitin Gadkari is considered very efficient. The problem in Goa is that all the contracts given to construct the highways and to repair them are given to Venkatarao who happens to be a close relative of Vice- President of India Venkaiah Naidu.
In the normal course there should be no emergence of any potholes so quickly post-construction, at least not on the Atal Setu bridge surely, as it was built by the country’s most reputed engineering firm – Larsen & Toubro. But apparently even they are helpless in dealing with the son-in-law of the vice-president.
Former chief minister of Goa and later defense minister of India, Manohar Parrikar, had a passion for bridges and had insisted on inaugurating the Atal Setu bridge despite his health being in a critical condition (he was on tubes running through his nose). While gamely inaugurating the bridge however he is reported to have remarked “Abhi bhi josh hai!” Unfortunately, there is neither josh nor host in the Atal Setu bridge of Goa.

EASING SEDITION LAW
AND a few stray thoughts on directions given by the Supreme Court to the Central government to change the sedition law. The SC has provided much needed relief and has instructed State governments to put sedition laws on hold till the Centre completes its review.
As of now the Central government may pick up any citizen on any excuse and put him or her away in prison for sedition. For instance, if any of the spectators at an Indo-Pakistan match raise support for Pakistan — they can be arrested for sedition. In the recent past, devout Hindus have been arrested for reciting the Hanuman Chalisa, special prayers to woo Lord Hanuman, outside the residence of Shiv Sena chief, Uddhav Thackeray in Mumbai.
Between 2010 and 2021 police have slapped sedition cases against activists, journalists, politicians, students and ordinary citizens (in violation of guidelines laid down by the Supreme Court). So far over the last decade more than 13,000 people have been arrested under the Sedition Act which has been rightly described as a “data of darkness.”
Oxford University defines sedition as the use of words or actions that are intended to encourage people to oppose the government. Under the Indian Penal Code sedition is described as creating hatred, contempt or disaffection against the government through words, signs or other ways.
However, a five-member bench of the Supreme Court has now made it clear that no sedition case can be registered unless there is a call for violence or there is an intention to disrupt public order. Mere criticism of the government cannot be considered sedition. The government, of course, is arguing that misuse of the sedition laws is not an excuse for scrapping them.
Among the cruelest victims of the sedition laws was Fr Stan Swami who was arrested in the Bhima-Koregaon case, in an act of pettiness he was even denied a sipper in jail, even though he was suffering from Parkinson’s disease and could not drink with a glass. Fr Stan died in custody later on having failed to get bail on compassionate grounds.
The interesting part of it is that the overwhelming majority of the sedition cases have been dismissed by the High Court and the Supreme Court. Amongst the most absurd cases of the misuse of the sedition law in the recent past, is the arrest of Dr Neeraj Chaudhary, over a video in which his supporters were shouting “Pakistan Zindabad!”
Congress candidate Ajay Rai was charged with sedition for using undignified language against UP Chief Minister Yogi Adityanath. Filmmaker Ayesha Sultana was charged with sedition for claiming the Centre was using covid as a bioweapon. A sedition case has been filed by a Congress MLA against a collector for not inviting him for a function! India should follow the example of Singapore which has scrapped the sedition law.

PROMOTE TOURISM ABOVE ALL!
AND a few stray thoughts on the Director of Health Services Geeta Kakodkar involved in a clash with the Chief Minister Pramod Sawant. While Chief Minister Pramod Sawant is more interested in promoting tourism, the Kakodkar is rightly concerned about a fourth covid wave. The CM has removed all curbs on tourists coming into Goa for holidaying. You don’t need a vaccination certificate nor a covid negative certificate. There are no restrictions on the number of people that can be accommodated in a gathering, as opposed to the former limitation of using only two-thirds capacity of the venue concerned. Pramod Sawant has even gone to the extent of claiming that even masks are not mandatory. He himself shuns a mask at public events or even while visiting Prime Minister Narendra Modi.
The Director of Health Services and GMC dean Dr SM Bandekar, who is a member of the Special Committee, has been insisting that all covid protocols should be followed. According to the GMC dean the number of covid cases are going up and a fourth wave is expected in June. The chief epidemiologist Dr Utkarsh Betodkar has asked everyone to get fully vaccinated. The fourth wave is likely to affect children and a new vaccine has been introduced for children between the age of 5 and 10 years. Senior citizens have also been asked to take extra preventive booster doses.
Meanwhile the State of Goa has got its first genome sequencing lab. This will confirm the covid variant a patient is suffering from. Though the GMC got the genome sequencing machine earlier, it is not functioning for want of competent staff or so we are told. Fortunately, summer vacations are on and we will know more about the fourth wave only when classes resume.

TIGER CORRIDOR!
AND a few stray thoughts on the Supreme Court stressing that the proposed South-Western railway route which was marked for double-tracking is a vital tiger corridor. Health Minister Vishwajit Rane, who is also the forest minister, however, is not convinced. It may be recalled that he went to the extent of calling the tigers “non-resident” earlier on. Maybe the Goa Revolutionary party will call tigers POGOs. Several sightings of tigers have taken place at the Chorla ghats.
Way back in 2013 the then conservator of forests, Richard D’Souza had confirmed that Goa’s Western Ghats were tiger territory. The SC has insisted that it is necessary to undertake a study to define the protected area under the Wildlife Protection Act. The Wildlife Protection Board has proposed to undertake a study of the long-term impact, planning of various mitigation measures and providing safe passages for wild animals. Besides tigers, Goa is also reported to be home to a large population of leopards.
The double-tracking of South Western Railway (now a dropped project) would disrupt the movement of wild animals between the connected wildlife sanctuaries between Goa and Karnataka. The doubling of the railway line will only create more problems including the possibility of accidents to wild animals.

WATER IS GOLD
AND a last stray thought on the comments of Water Resources Minister Ravi Naik that the price of water may soon exceed gold. Which may be the reason why the honorable minister has been proposing exporting Goan water to the
Gulf countries. Though the experience of average Goans presently is that they cannot get water even for two hours daily Minister Ravi Naik seems to think that Goa has surplus sources of drinking water.
The fact is the water situation in Goa may well be compounded after the diversion of Madei river waters at source — to meet the water needs of Hubli and Dharwad, as also to water the power guzzling sugarcane fields of Malaprabha basin. Clearly Ravi Naik has no concept of the changing patterns of water resources in Goa and how water is being used and abused to death. Besides the domestic consumer, the industrial sector has also been complaining of severe shortage of water. Unlike the Gulf countries, Goa cannot afford sea water desalination plants. Goa also has little idea of rainwater harvesting.
Interestingly, the former Portuguese territory of Diu in Gujarat, used to have a water storage tank on the top of every residence. The only big organization in the state which has rain water harvesting is the National Institute of Oceanography. The new WRD minister is planning to recycle sewage water to supply to industries. This will further add to the burden of the number of pipes underground. Already the space below narrow roads are full house with power cables, fiber optic cables, water pipelines, sewage pipelines and other utilities. Every time one of the utilities has a problem, the road is dug up, damaging pipelines and other utilities. The simple way to get instant water supply in Goa is go and damage a pipeline! There is no secure protection for the various utilities.