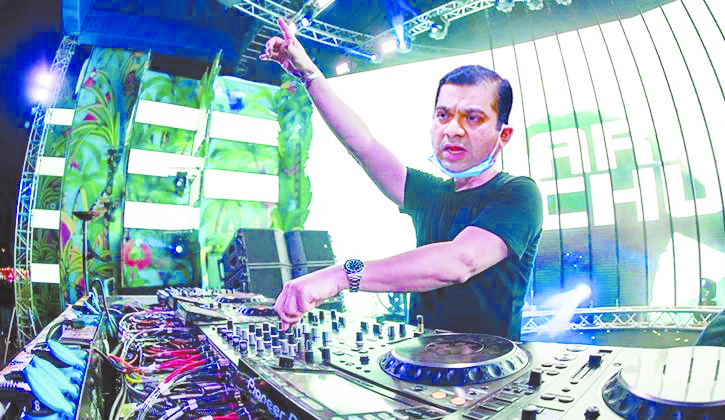 SUNBURN: The Tourism Ministry headed by Rohan Khaunte has decided to take over the organisation of the EDM festival which was traditionally organised by Sunburn. Rohan Khaunte has refused to consider the request of Sunburn to revive the festival in December this year.

ATAL SETU BRIDGE
AND a few stray thoughts on both Chief Minister Pramod Sawant and Power Minister Sudin Dhavaliker insisting that there is nothing wrong with the construction of the Atal Setu bridge. The Atal Setu bridge was the pride and joy of former Chief Minister Manohar Parrikar, who took great pride in connecting north Goa with south Goa. The third bridge over the Mandovi river which towers over the other two existing bridges was in fact inaugurated by Parrikar when he was in the terminal stage of his pancreatic cancer. He had insisted on throwing open the Atal Setu bridge personally and turned up with a tube running through his nose to dramatize that he still had the josh (fire).
What was meant to be a monument of excellence for Parrikar, the chief architect of the BJP government in Goa, has become an insult. The Atal Setu bridge sprung potholes within less than a month of its speedy construction. The Ribandar link had to be closed for some time to fill the potholes.
The Indian Institute of Technology, Mumbai has recommended that the Atal Setu bridge should be shut down till all the repairs are carried out firmly for safety. There are even insinuations that the bridge’s cement coating is coming off to reveal sandy stretches. Despite the grave infirmities confirmed in the construction of the bridge by the IIT (Mumbai), both the CM and Power Minister Sudin Dhavaliker who was the Public Works Department minister during the construction of the bridge are claiming that all is well. They have disowned responsibility for the state of the bridge claiming that it was built by the Goa State Infrastructure Development Corporation and not the PWD.
It is shocking that the construction of the Atal Setu bridge is so shoddy considering that the contractor was L&T, one of the most reputed engineering companies in the world. The fault is not that of L&T, whose other constructions range from nuclear plants to huge factories built without any complaints. The fault here is entirely because of the subcontractor Venka Rao to whom L&T was forced to award the contract for construction of Atal Setu.
Though there have been several assurances that action will be taken against the contractors but this does not include Venka Rao who is responsible or rather irresponsible for most of the shoddy constructions in the state. Ranging from the super-speciality block of the GMC, to the Dona Paula bypass road. Venka Rao has not only been getting all the prime contracts but getting away with shoddy work because he is closely related to Vice-President of India Venkaiah Naidu.
Which is why, not just Atal (strong) but other roads and bridges in the state are in such a shoddy state. Let us hope new PWD Minister Nilesh Cabral has the guts to take action against shameless contractor Venka Rao. This close kin of the vice-president of India has so much clout that none of the national or even local media even dare not mention his close links.

PANCHAYAT WOES
AND a few stray thoughts on the state government deciding to postpone the panchayat elections till the end of the monsoons. This despite the fact that the State Election Commission has rejected the request of Panchayat Minister Mauvin Godinho deferring the panchayat elections. The excuse for postponing the panchayat elections is that the Other Backward Class reservation quota has not yet been finalised. Besides the reservations for women and for Scheduled Tribes, it had been decided to reserve a percentage of seats for the (OBC) which includes the socially, economically and powerful Bhandari Samaj.
Many of the senior politicians in the state like Union minister and North Goa MP Shripad Naik and Water Resources Minister of State Ravi Naik, belong to the Bhandari Samaj. The demand for elections by the dominant caste groups is not limited to Goa. In Maharashtra there are the Marathas to which community Shivaji Maharaja belonged and there are the Jats in Punjab who also demand reservation.
Following the mechanisation of farming, many of the traditional farming community also want government jobs and admission into professional colleges.
Goa State Advocate General Devidas Pangam has strongly opposed the postponement of the panchayat elections. This is because the Supreme Court has ruled that panchayat and municipal elections should be held every five years and should not be postponed. The BJP government is afraid that without OBC reservations it may not be able to repeat its performance in the assembly elections where they got a majority.
Both the Congress Party and AAP are determined to take control of the panchayats. Particularly in South Goa where with the victory of Captain Venzy Viegas, AAP is working overtime to win the maximum number of panchayats. The Goencho Ekvott too has got a boost with the Supreme Court decision not to permit double tracking in the ecologically fragile Kulem to Castlerock section of the South-Western railway.
It is doubtful if the courts will permit the government to postpone the panchayat elections as their term of five years has already ended. In a similar situation in Maharashtra, the SC refused to permit the postponement of the municipal elections in Maharashtra.

KHAUNTE’S EDM
AND a few stray thoughts on Tourism Minister Rohan Khaunte wanting to organise his own Electronic Dance Music (EDM) festival. Young Rohan Khaunte and his brother Roshan are active party animals and have been Sunburn fans long before Rohan got into politics.
Roshan Khaunte took control of the Gaspar Dias Club and the Panjim Gymkhana after Rohan entered politics and became the tourism minister. Rohan is aware of the huge amounts of money that the organisers of Sunburn and other EDM festivals make. It may be recalled that in their greed for kickbacks, former tourism ministers permitted multiple music festivals in North Goa. In addition to Sunburn there have been “TimeOut” and “Vh1 Supersonic.”
Initially, Sunburn EDM was held on the property belonging to the then Calangute MLA Agnelo Fernandes. The music festival later shifted to Vagator with new players taking over the venue of Calangute. Even in the last season in December, though officially there was a ban on Sunburn for fear that it would lead to the spread of Covid, Hirendra Singh held an unofficial EDM at the Hilltop Vagator.
The EDM festivals are huge money spinners as they attract young net worth tourists from all over the country and even from abroad. This is because some of the best DJs globally perform at these EDM events. For those unfamiliar with EDMs, they represent music played by DJs using electronic turntables instead of live band music that Goa has been famous for over decades. Even now there are several singing families in Goa ranging from the Cotta family, the family of former musician Emiliano, not to mention Goa’s fado queen Sonia Shirsat, Hema Sardessai, also daughter of GMC dean Akshata Bandekar (who is now an engineering student).
The new tourism minister has been very quick to identify the top money spinners in the tourism industry. Never mind that neither Narendra Modi nor Amit Shah might have heard or approved of Electronic Dance Music including trance and techno. On the other hand, since they don’t seem to have any objections to casinos and converting Goa into a coal hub, they may actually applaud Rohan for finding fresh sources of revenue for the BJP.
Coincidentally, Tourism Minister Rohan Khaunte has taken the decision to have his own EDM despite an application from Sunburn for holding its traditional music fest in December in Goa.

TARRY BEACHES
AND a few stray thoughts on blackening of the beaches of Goa by tar balls. This is an annual pollution of the shoreline just before the monsoon. Cases of tar balls appearing on the Goa coast have been reported since 2015. The highest number of 13 tar ball cases have registered on Goa’s beaches. In 2021, 12 cases were reported in a single day.
The National Oceanography Organisation (NIO) has traced the tar balls to the Bombay High region which has a gas and petroleum exploration rigs. The tar balls are also attributed to ships washing their bilges on the outskirts of the harbour. Last year, Environment Minister Nilesh Cabral had said that the tar balls are found to be originating from oil discharged by vessels operating in the high seas off Mumbai’s coast.
The tar balls have left the beaches of Mandrem, Arambol, Morjim, Kerim, Ashvem, Calangute, Baga, Caranzalem and Miramar in a sorry state and putting off tourists and locals from enjoying the beaches in north Goa. In south Goa the beaches affected are Velsao and Cansaulim. The Tourism Department is busy these days collecting the tar balls and storing them on their premises. Perhaps they may be part of the decorations for the EDM festivals being organised by the government.

One thought on “ROHAN KHAUNTE TO BE GOA’S NEW DJ!”