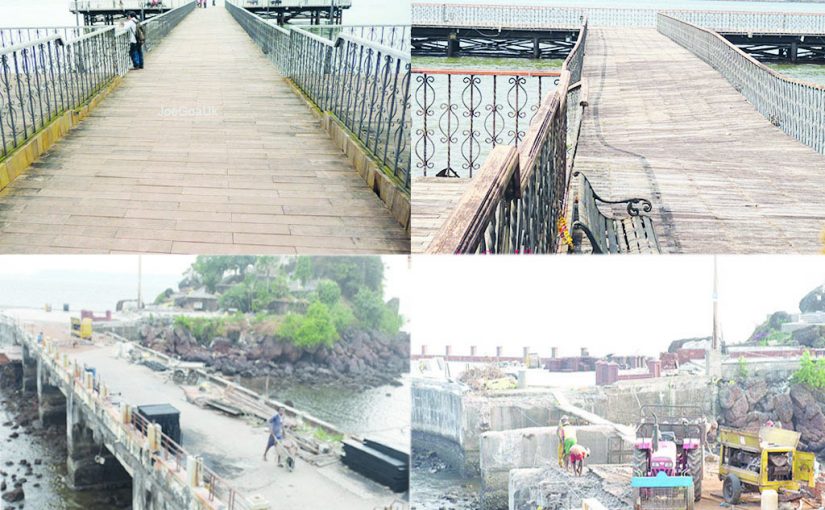 INSULT: It is an insult to the legacy of the late Manohar Parrikar that the shoddy Atal Setu bridge is due to the cheap and indifferent work carried out by subcontractor M Venkata Rao.

M Venkata Rao Infra Projects Pvt Ltd has been entrusted with the majority of major contracts in Goa including the Atal Setu. MVR is responsible not only for the potholes on Atal Setu but also for disrupting water and power supply lines through mindless digging for expansion of national highways projects. However, MVR Infra Projects, owned by Venkata Rao, is untouchable – because he is a closely related to the Vice-President of India, Venkaiah Naidu. He is the son-in-law of Venkaiah Naidu.

M Venkata Rao Infra Projects Pvt Ltd (MVR Infrastructures) based in Nagali Hills, Dona Paula, which has been entrusted with the majority of major contracts in Goa including the Atal Setu, has also been given the contract for the expansion of national highways. MVR is the most irresponsible contractor in the state and country. It is responsible not only for the potholes on Atal Setu but also for disrupting water and power supply lines through mindless digging for expansion of national highways projects.
However, MVR Infra Projects, owned by Venka Rao, is untouchable – because he is the son-in-law of the Vice-President of India, Venkaiah Naidu.
The 5 km cable stayed bridge over the Mandovi river soaring high above the two earlier bridges was the pride and joy of former Defence Minister and Chief Minister of Goa Manohar Parrikar. The main purpose of building a third bridge was to ensure enough connectivity between North Goa and South Goa. With the existing bridges vehicles had to come into Panjim city for their onward journeys to Ponda on one end and Madgao on the other. The Atal Setu was an octopus bridge with arms extending towards Ribandar and Agassaim so that traffic could bypass Panjim city altogether.
The contract was awarded to L&T which has been rated the second best engineering company in the world by a leading brand agency. How is it possible that a company with such a great reputation do such a shoddy job of a bridge named after the first BJP Prime Minister Atal Bihari Vajpayee? The bridge was named Atal as Vajpayee was considered one of the strongest and mature prime ministers of the country. He was the prime minister with the guts to go ahead with India’s first nuclear explosion in Pokhran in Rajasthan, unmindful of the global condemnation of India joining the nuclear race.

NOT L&T FAULT
IT IS not the fault of L&T that the Atal Setu bridge and its connecting arms have turned out to be such a disaster. The project was handed over to the Goa State Infrastructure Development Corporation of which the chief minister has always been the chairperson. At the instance of the GSIDC, the construction of the Atal Setu bridge was sub-contracted to MVR contractors, so named after Venkata Rao, the son-in-law of Vice-President of India Venkaiah Naidu.
It is hardly surprising that MVR contractors who have a Panjim head office in Dona Paula have done such a shoddy job as they are notorious for arrogant and deliberate incompetence. Despite their track record they are awarded every major contract because of their connection with Vice-President Venkaiah Naidu.
The biggest disaster for Goa is that MVR has also been allotted the expansion of national highways for the benefit of industrialist Gautam Adani by Union Minister for Transport Nitin Gadkari. As recently as May 20, 2022 MVR was in the process of expanding the national highway in Vasco which allegedly damaged two 33 KV cables including a standby cable — which plunged Vasco into darkness for over 31 hours.
This is not the first time that MVR have in their uneducated digging in the course of construction of anything damaged electrical and other cables. Indeed, the Goa Bench of the Bombay High Court has directed MVR to fill all the potholes from Patradevi to Panjim by May 15. Little or no progress has been made even as on Statehood Day on May 30. The Atal Setu potholes and peel-offs are also due to the shoddy work of MVR sub-contracted workers.

BIGGEST BLUNDERS
AMONGST the biggest blunders of the MVR contractors is the concretization of the Miramar-Dona Paula bypass. After spending huge amounts of money the project was abandoned. Besides power cables, supply of drinking water to the population of Goa has also been sabotaged by MVR contractors. Among the drinking water pipelines damaged were those bringing water to Merces and Panjim.
MVR also has a reputation for exceeding the budgeted amount. While the principle of the government is to award the contract to the lowest bidder, this is not so in the case of MVR which enjoys very special status with the Goa government. While the Goa Assembly was supposed to be given a facelift at an estimated cost of Rs72 crore, the actual payment made to MVR was Rs79 crore. MVR has also been asked to give a facelift to the Goa High Court which will probably suffer the same fate.

THE MVR TOUCH
NOTHING is safe if it has been touched by MVR. Both the Dona Paula jetty and the Kala Academy jetty built by MVR which kept collapsing each time. Originally, it was Manohar Parrikar who thought of building a jetty at Kala Academy, before the first IFFI. High profile delegates were accommodated at the Taj Aguada resort at Candolim. The jetty was built to enable the delegates to come by speed boats from Aguada to Kala Academy jetty. The jetty was never used as it was never completed.
Subsequent years the jetty was rebuilt time and again but it continues to remain a relic of the late Manohar Parrikar’s super ambitious plans for IFFI. Other relics include the Dayanand Bandodkar football stadium which was to hold the most prestigious Bandodkar Gold Cup Football Tournament. The Bandodkar football grounds are now used to create temporary air-conditioned structures for the opening and closing ceremonies for IFFI and other similar cultural events organized on a large scale.
The National Highway Authority recently warned strict action against contractors responsible for shoddy work. The question is whether this will apply to MVR which keeps getting projects though they neither qualify or have the technical expertise as seen from their earlier concretization of the Dona Paula bypass road (which is the Dr Jack Sequeira Road) and subsequent major disasters with the entrusting of the expansion of the national highways. MVR is arrogant and indifferent to the suffering caused by its workers on careless digging sprees leading to damaged water and power cable.
But MVR is invulnerable to any action taken or not taken by the State or Central governments because of the close relationship of Venkata Rao with the Vice-President Venkaiah Naidu.

One thought on “VICE-PRESIDENT PATRON OF ATAL SETU DISASTER!”