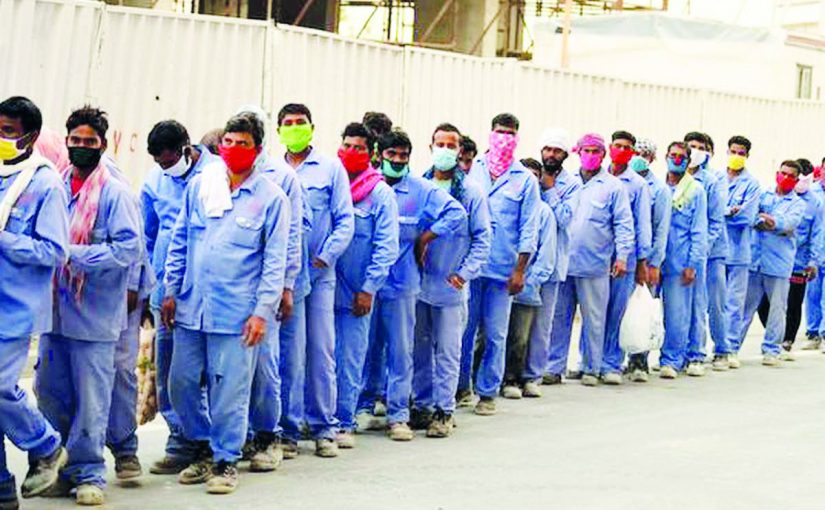 EXIT: Hindu workers in the Gulf countries including Saudi Arabia and Oman have been asked to return to India following insulting remarks on Prophet Muhammad by BJP leaders.

In the wake of the defamation of the Prophet Muhammad by Nupur Sharma and Naveen Jindal, Hindus are being sacked from their jobs in the Gulf countries including Qatar and Saudi Arabia.

In his six years as prime minister, Narendra Modi has expended more time, effort and commitment to cultivating ties with the Gulf region than any of his predecessors, and India’s initiatives have been fully reciprocated by his regional counterparts. These interactions have been assiduously promoted with frequent exchanges of visits, warm expressions of personal goodwill, even affection and several agreements to impart substance to the relationship in political, energy and economic areas.
Now, when the world is grappling with the extraordinary challenge posed by the coronavirus pandemic, relations shaped, elevated and solidified by the prime minister have been jeopardised – not by external rivals – but by cohorts from within his own ideological and political bandwagon, the Hindutva brigade. All of a sudden, tweets on social media and reports on mainstream television and newspaper columns are awash with harsh and angry exchanges between India’s Hindu nationalists and some sections of the Gulf’s elite – royal family members, business persons, professionals and human rights activists.
These tirades began innocuously enough: in an exchange between two Indians, a resident in the UAE, Saurabh Upadhyaya, who heads a consultancy firm, tweeted abusive messages about members of the Tablighi Jamaat; he, inter alia, referred to the Tablighis spitting on people as a “new form of jihad”. He ended his virulent message with: “Death to radical Islamic tabligi (sic) terrorists and other radical Islamic sons of satan.” To this he added some choice expletives in Romanised Hindi.

THE WAR OF TWEETS
Then, in a unique development in Gulf annals, a member of the Sharjah royal house, Sheikha Hend Al Qassemi responded to this tweet. Recalling her family’s close ties with India, the sheikha said: “… your rudeness is not welcome. … You make your bread and butter from this land which you scorn and your ridicule will not go unnoticed.” She then quoted UAE laws prohibiting hate speech by citizens and non-citizens.
In her later tweets, she listed the several public gatherings by Hindu pilgrims in different parts of India between March 9-19, which had attracted thousands of devotees, and placed the Tablighi congregation of 4,000 attendees within this broad context. She countered the aggressive Hindutva users of social media by reminding them that “Gandhi was a fearless campaigner for the rights and dignity of all people.” “He [Gandhi] won my heart”, she concluded, “and I believe in his peaceful approach to handling hatred.”
In an interview with an Indian television channel, Sheikha Hend was asked if she would similarly condemn “Hinduphobia”; she replied that in the UAE, “No one hates Hindus”.
This royal intervention has opened the floodgates to comments from other sources. An academic based in the US, specialising in Islamophobia, Khaled Beydoun, wrote in The New Arab about how the entire Indian Muslim community had been stigmatised for the transgressions of the Tablighis: they were being “scapegoated as disseminators of the novel virus in India”, through such appellations as “Corona jihad” and “Muslim virus”.
He said that Islamophobia in India was “state-sponsored”, and, referring to the communal riots in Delhi in February, held Prime Minister Modi responsible for the spread of “this pandemic violence”. He thought that this “novel strain of the Hindutva menace” was capitalising on “national anxiety” due to the global pandemic to demonise Muslims.
A religious scholar in Saudi Arabia, Sheikh Abidi Al Zahrani, called for the listing of “militant Hindus” in the Gulf Cooperation Council (GCC) countries who were “spreading hate against Islam, Muslims or our beloved Prophet” under the hashtag “Send Hindutva Back Home”. In another tweet, he noted that millions of Indians lived in the Gulf and were treated free of charge if they were infected by the COVID-19 virus, “while Hindutva terrorist gangs are committing crimes against Muslim citizens.
Another Gulf resident, Preeti Giri, an executive director with a major local company, in her tweet told her followers that the actor Amir Khan belonged to the Tablighi Jamaat which was “Sunni, Hanafi ideology which was 99% Deobandi”; she exhorted them not to be so naïve as to “run after his films”. A prominent Emirati businesswoman, Noora al Ghurair, reprimanded Giri: “By your hateful logic Sunnis by association are terrorists because of propaganda against Muslims in India? Do U know [in] the country you live in all rulers are Sunnis? U want to boycott us?”
An academic of Indian orign, Ashok Swain of Sweden’s Uppsala University, wrote an opinion piece in Gulf News, Dubai, on April 22 in which he detailed how the pandemic had been deliberately communalised by Hindutva elements. He said: “Islamophobia has reached its peak in India with the increasing rise of coronavirus crisis. This is not just a primordial reaction of society, but a very well planned and finely executed political project.”
Noting the mis-steps of the government in handling the pandemic and the attendant serious economic crisis, Swain concluded:
“India’s Hindu nationalist regime aims to give the coronavirus crisis a communal colour, which will give it an escape route from its abject policy failures and also at the same time the increasing anti-Muslim environment will bring them political benefits in the coming elections in crucial states like Bihar. Coronavirus has brought a very serious crisis for India, but for the Narendra Modi regime, it has also provided a powerful political opportunity.”

INDIA HATE CAMPAIGN BLEEDS FOR GULF
While these exchanges were on, tweets by the BJP member of parliament, Tejasvi Surya from 2015, quoting the self-styled Islamic “scholar” Tareq Fatah (who had been popular in Hindutva circles in India a few years ago) cropped up. The tweet said, “95% Arab women have never had an orgasm in the last few hundred years. Every mother has produced kids as act of sex and not love.”
This obviously was found most offensive. Noora Al Ghurair, a prominent businesswoman in Dubai, said: “Pity your upbringing that respect for women couldn’t be instilled in U despite India having some great female leaders.” She advised that, if he were to join the Indian foreign ministry in future, he “should avoid visiting Arab lands. You are not welcome here”.
A commentator from Kuwait, Abdul Rehman Nassar tweeted directly to Prime Minister Modi insisting that Tejasvi Surya be deprived of his parliamentary membership. He told the prime minister that Indians in Kuwait constitute the largest community among those infected with the coronavirus and were being treated in the best hospitals. He reminded Modi that Indians remitted billions of dollars to their country and all of them (mostly Hindu) were treated well in all Gulf countries. How are Muslims treated in India, he asked.
A Kuwaiti lawyer and human rights activist, Mejbal Al Sharika, also questioned Modi on the Surya tweet, pointing out that Surya had “publicly humiliate(d) our women” and demanding punitive action. He announced he was attaching himself, with other Gulf activists, to the cause of the Indian Muslims against “Hindutva fascism”.
On April 19, Modi intervened for the first time with a tweet.
Most observers would see these remarks as reflecting little conviction and less enthusiasm. In any case, they are likely to have no impact on his zealous followers. As Nilanjan Mukhopadhyay has pointed out in his article on April 24:
“… his [Modi’s] words … were posted on a platform which is primarily a business and employment-oriented service used for ‘networking’ by professionals.
“The vital question is, was this message intended for his supporters who have been fanning hatred towards Muslims or was it just to put it on record that the prime minister was opposed to religious profiling of coronavirus patients? Modi’s messaging is odd on two counts. One, if this is indeed aimed at signalling to the proverbial bhakts or blind supporters, Linkedin was not the appropriate platform to convey. Secondly, the smear campaign does not contend that the virus ‘chooses’ victims on basis of their religious identity and instead depicts Muslims as the chief and wilful carriers of the pandemic in the country.”
Why this intervention can be seen as half-hearted is because the hate campaign against Muslims on social media has been rampant within the country for a few years, but it has only now seriously entered Gulf consciousness, with Twitter traffic today consumed by the Hindutva narrative and Gulf nationals expressing their sentiments vociferously. This has also provided a great opportunity for Pakistani agencies to join the anti-India discussion with fake messaging, though, of course, their task is facilitated by the relentless abuse concocted and proliferated by Hindutva zealots.
Demonising Muslims by blaming the Tablighi congregation as being primarily responsible for the spread of the virus in India became central to the Hindutva narrative from late March itself, with mainstream Indian media an enthusiastic accomplice.
Figures from official sources were quoted to show how the Tablighis, returning home after their congregation in Delhi, had spread the disease. To this were added stories of their misbehaviour and misconduct – walking without trousers in hospital wards, making vulgar advances at nurses, throwing vegetarian food, defecating in wards, and deliberating spitting into food to spread the virus. These reports pandered to the traditional caricature of the Muslim in Hindutva lore – dirty, lascivious, uncouth and very malevolent and dangerous.
Senior political leaders publicly spoke of Muslims as “human bombs” and “enemies of humanity” – “Corona jihad” and “Muslim virus” have entered the national vocabulary and stayed in the mindset.
And, all of this was fake. Stories of Tablighi misconduct were later denied by officials, but without the vehemence and enthusiasm with which they had first emerged. The story of the figures of contamination by the Tablighis is even more interesting. Irena Akbar has explained how this was done; she has pointed out: “If many positive cases from March 29-30 onwards are linked to the Tablighi Jamaat, it’s because its members and their contacts are being rightly but selectively tested while the overall testing remains abysmally low.” She refers to this as “sampling bias”.
Recognising the need for more effective damage-control, external affairs minister S. Jaishankar personally intervened in the imbroglio: on April 23-24, he spoke to his counterparts in the UAE, Qatar, Oman and Saudi Arabia. According to press reports, he assured his interlocutors that India would continue to provide food supplies during the holy month of Ramadan and would make available the medicines required to fight the pandemic. Reports on television said he affirmed India would remain committed to its “Look West” policy.