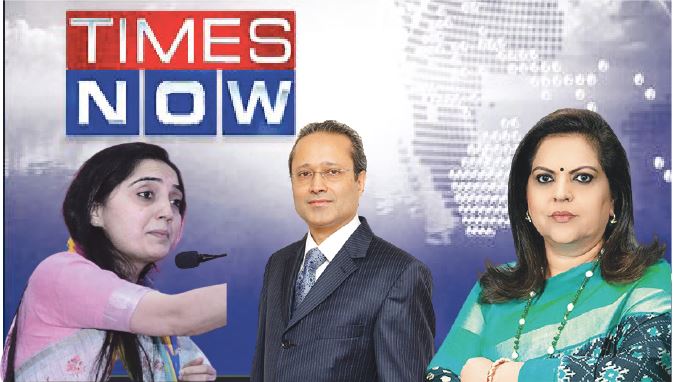 HATE: The Times of India Group which considers itself India’s most trusted brand was responsible for spreading hate through its Times Now’ TV channel. Editor ofTimes Now’ Navika Kumar did not stop or discourage Nupur Sharma from making derogatory remarks on Prophet Muhammad during a talk show.

There have been demands for the arrest of Times Now’ chief editor Navika Kumar for encouraging Nupur Sharma to make derogatory remarks about Prophet Muhammad. Meanwhile theEconomic Times’ has been carrying offensive memes on shivling which have now been withdrawn.

THE social media which includes Facebook, Instagram and Twitter are the biggest inciters of communal disharmony. In the wake of BJP spokesperson Nupur Sharma making derogatory comments on the teenage age of one of Prophet Muhammad’s wife, the social media has been full of provocative remarks both from Hindus and Muslims.
There are Hindu fundamentalist who are defending Nupur Sharma and Naveen Jindal, the two primary accused by Muslims of blasphemy against the prophet. First Information Report has been served on both of them but significantly, neither have been arrested so far although demands have been made from various quarters to arrest them.
On the other hand violent comments are being made over social media by Islamic fundamentalist demanding not just arrest but lynching of Nupur and Jindal. Indeed, there is an image in one of the BJP-ruled state of a mock hanging of Nupur. It is not just the Islamic states outside India but the Muslim community within India which has mounted a very aggressive campaign against the insulting of Prophet Muhammad.

MAULANA FEEDBACK
VARIOUS Maulana are being invited by on various television channels for debates on the issue. The television channels are not interested in the truth. They only want to increase their TRP ratings by creating unnecessary controversies. Which is why the All-India Muslim Board has asked their Maulana and other officials of Islam not accept any invitations for debates on television channels. It is not widely known but the channel which started the whole controversy is `Times Now,’ the channel owned by Times of India group which has not withdrawn the footage on discussions between Nupur Sharma and Amita Wadhwa, TOI anchor.
Nupur claims that she was quoting Hidayaah (directives) from the Quran on the wife of Prophet Muhammad. Nupur has been suggesting that Prophet Muhammad had engaged in a child marriage with Aaisha. I have read the Quran and other books on Prophet Muhammad which all confirm that she was a teenager. According to the Marxist historian Maxin Rodinso who has written a book on Prophet Muhammad, Aaisha was his favorite wife. In any case, even if Prophet Muhammad married a minor, it is none of Nupur Sharma’s business. Particularly, when she comes from a country where child marriages were the norm in many of India’s rural states. The most popular television series “Balika Vadhu” was about child marriage.

RURAL TRADITION
IN many rural areas the tradition is that there has been an agreement between two sets of families or parents that when children are born and barely two or three years old their engagement and marriage may be announced although the marriage would take place at the time of puberty. This was based on the principle that marriages were really relations between families and not just between groom and the bride.
The worst part of child marriages in India is that there are any number of such cases even now when minors are married to much older man. States in the country like Haryana, Punjab, Rajasthan and Delhi experience a shortage of women due to female infanticide and this means that families are so obsessed by having male children that if a female child is born she is quietly killed in a case of infanticide and few are wiser or even if they are there is the secrecy of silence all around. Naturally and eventually this leads to a shortage of women in society and men have to go to the other states hunting for women to marry.
Initially, the response of the minority Muslim community, on Nupur’s remarks about Prophet Muhammad, was quite mild. But in the wake of the international uproar in the Islamic world in the Middle East and elsewhere, the Muslim community in India seized the opportunity to take an aggressive stand. It is not just the hardcore Islamic countries like Saudi Arabia, Iraq and Iran but even the United Arab Emirates and countries like Malaysia and Egypt, which lodged protests strongly against Nupur Sharma and Navin Kumar’s derogatory remarks about Prophet Muhammad. A boycott of Indian products has been declared by countries of the Gulf. Hindu employers even in relatively moderate states like Qatar have been asked to quit. They have been given back their work permits, paid their dues and put on flights to India.

GREATER WORRY
THE much greater worry for India now is the economic consequences. The United Arab Emirates are the largest trading partners of India. Over 70% of their imports of food items and fruits, not to mention meat, is exported from India. Ironically, the largest exporter of meat in India, is the state of Yogi Adityanath, Uttar Pradesh. The even greater worry is that the Gulf countries, Qatar and Saudi Arabia are the largest suppliers of petroleum and liquefied domestic gas to India. If Qatar decides to suspend supplies the price of the gas cylinder might touch Rs 10,000 from the present Rs1,100. The international price of crude due to the Nupur Sharma and Navin Kumar incident and the Ukraine war has risen to $150 per barrel.
It is a matter of real pride that there has been no communal tension of any sort in Goa due to the blasphemy incident. It is unfortunate that the State government should have permitted Hindu Janajagruthi and its sister organization Sanatan Sanstha to hold a Hindu Dharma Sansad at Ramnathi Temple in Goa. This amounts to deliberate provocation. We hope that the growing Muslim community in Goa will maintain a calm attitude and refuse to be incited. If there are problems in Goa it will be the Muslim minority which will be the worst affected.
This is because Goa is one of the few states which welcomes and offers jobs to Muslims. We only have been cautious about being influenced by the fanatic Muslims of Karnataka. There have been incidents reported of protests against Nupur Sharma and threats of violent action against her even from Belgavi (formerly Belgaum). Goa should continue to set an example to other states and Muslims in Goa should even avoid making provocative statements on Facebook or any other social media.