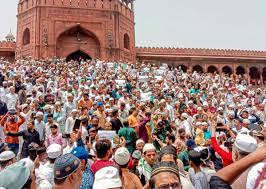 PROTEST: Across the country there have been protests and even violence after Friday namaz demanding the arrest of Nupur Sharma.

Though an FIR has been filed by several police stations across many states against Nupur Sharma and Naveen Jindal, they have not been arrested in a single case. This is not the case when even individuals who post messages against Modi are arrested promptly under the National Security Act.

By Press Trust of India

A senior police officer said that while some of the demonstrators left the site after some time, others continued to protest
Protests erupted outside the Jama Masjid here after Friday prayers with hundreds of people demanding the arrest of suspended BJP spokesperson Nupur Sharma for her controversial remarks on Prophet Mohammad, police said.
A large crowd of people gathered on the steps of the famous mosque, carrying placards and shouting slogans against Sharma and Naveen Jindal, former head of the Delhi BJP’s media unit. There was heavy security deployment to manage the situation and avoid any untoward incident.
According to senior police officials, the protest was held peacefully on the stairs near gate number one of the mosque, and it lasted for around 15 to 20 minutes. The protesters were dispersed from the area later.
“The protest was held near the gate number one of Jama Masjid. We demanded the arrested of Nupur Sharma for her remark on Prophet Mohammad. It was a peaceful protest, and people left the area after a while,” said Akram Qureshi, a resident of the area.
“Nupur Sharma should be arrested. I will keep protesting until she is put behind the bars. How dare she disrespect our religion,” questioned 57-year-old Baba Mastan, who was part of the protest.
Mohammad Fahad (59), a shopkeeper, said, “The protest started at 2 pm. They were dispersed by the police within 15-20 minutes. It was a peaceful protest.”
Even after the protesters were dispersed, teams of the police and the CISF continued to be deployed in the area.
The row over the alleged derogatory remarks against Prophet Mohammad escalated on Sunday with protests from countries like Saudi Arabia, Kuwait, Qatar and Iran, prompting the BJP to take action against its functionaries and assert that it respects all religions. As the row intensified domestically and abroad, the BJP on Sunday suspended Nupur Sharma and expelled Jindal.
The Delhi Police has registered an FIR against 31 people, including AIMIM chief Asaduddin Owaisi and controversial priest Yati Narsinghanand, and filed a separate case against former BJP spokesperson Nupur Sharma for allegedly spreading hate and hurting religious sentiments.
The two FIRs were registered on Wednesday after a social media analysis, the police officials had said. Former Delhi BJP media unit head Naveen Kumar Jindal, who was expelled from the party over his alleged remarks against Prophet Mohammad, and journalist Saba Naqvi have been named in the FIR.