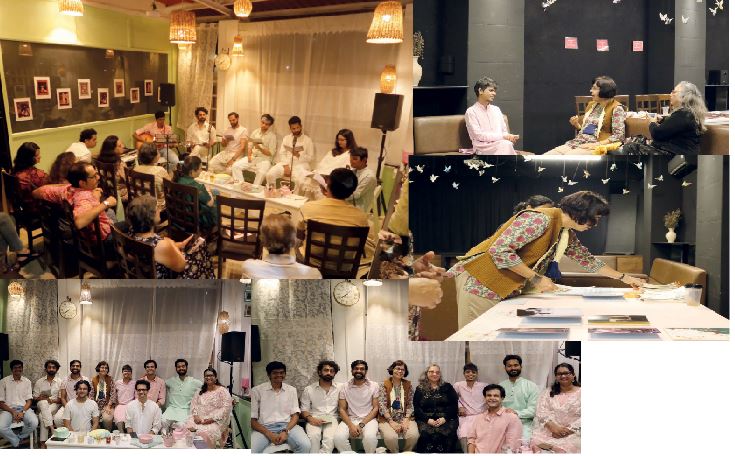 AN EVENING OF MONSOON POETRY…and the messengers of love! It was multi-cultural event with poetry in English and Hindi being read out to celebrate the role of the rain in people’s life. In India the monsoon rain is much loved and has been celebrated in music and literature through the ages and in good times and bad times. The evening special was titled “Song of the Rain” and organised by Dr Omkar Bhatkar of Metamorphosis Theatre.

The monsoon is a time for melodies and memories, and a recent programme in Mumbai directed by Omkar Bhatkar evoked the season in its many moods, says MENKA SHIVDASANI

LAST week, Dr Omkar Bhatkar’s theatre group Metamorphosis Theatre Inc. and St. Andrew’s Centre for Philosophy & Performing Arts (SAPP) in Mumbai celebrated the monsoon in a very special way.
In a programme titled Song of the Rain, spread over three evenings between July 22 and 24, they brought together a carefully curated selection of poems across languages by poets as diverse as Henry Wadsworth Longfellow, Emily Dickinson, Manglesh Dabral, Rainer Maria Rilke, Sudarshan Faakir, Tu Fu, Rabindranath Tagore, Gulzar and Anju Makhija, among others. From the delicate dance of a drizzle on a windowpane to the dark reality of those rendered homeless by floods, the poems evoked the monsoon in its many moods.
The ambience was magical – an open-air courtyard with paintings, soft lights, gentle music, and a backdrop of white curtains – as the breeze whispered and rain clouds gathered outside. This was not a poetry reading, nor was it a full-fledged theatre performance; it was an “in-between-ess” as Omkar said during the question-and-answer session which followed. Over a month of rehearsals, he had given his team “homework” that included staring outside the window at the rain for two hours!
“Rains have always fascinated me,” says Omkar, a multi-talented sociologist and academic who co-founded SAPP, and also runs Metamorphosis. “But this monsoon was way too different possibly because I didn’t know how deeply I’m influenced by this season. Sometimes when it rains, it is so powerful that it shuts all the noises, and all you can hear is rain. That is when you listen to yourself and your own emotions. The dreamy day of endless showers, an overcast day of dense clouds, one could share the kind of mystery with a significant other that could not be shared on other days.”
Omkar adds: “Such is the nature of one’s soul in this season which makes us look into the intricacies of our souls which wouldn’t be possible in another season. I also realised that I’m at my writing desk more often and this is how emerged the idea of going back to literature; poetry in this case echoes the sentiments of the soul in the rain.” Despite delayed trains, potholes, and leakages, Omkar sees the monsoon largely as a romantic season.
Omkar’s explorations into monsoon poetry opened up the world. He discovered Bhadon poetry that speaks of longing in the rain; in German poetry, he chose Rilke and his nostalgia of a childhood memory associated with rain. Chinese poetry, and the way it paints vivid images with words, came alive through Tu Fu, who lived around 712–770 C.E. With Marathi, Omkar wanted to recollect childhood memories of school time rain and textbooks, which included poems of Balkavi.
“In English, I stuck to my all-time favourite poets like Dickinson and Frost. In Hindi and Urdu, I picked poems from Manglesh Dabral, Gulzar, Sudarshan Faakir,” he says. “Tagore has extensively written on the monsoon, and so I ended up picking three of his poems. We also picked Assamese folk poetry, anonymous short poems, and contemporary works of poets like Anju Makhija and Deepa Ramchandran. In short, I tried to put such a diverse voice on rain along with a very little description, in a format which is neither poetry performance nor poetry recitation but something in between. A live guitarist supports the poetry, along with iconic rain songs from Hindi cinema that have defined a generation’s memory of music.”
In a city where people usually expect poetry readings to be free, Omkar has found that “Mumbai still has lovely folks who do buy a ticket for poetry performances and that has been very encouraging. Also, doing poetry performances in a format or the scale of a theatre production matters a lot.”
Metamorphosis Theatre Inc, a nine-year-old organisation, is a theatre group formed by art practitioners that seeks to deconstruct social reality and question ideas and beliefs. “Most of our plays revolve around poetry and existentialist themes,” Omkar explains.
Though grounded in theatre, Omkar has also written and directed independent feature films like “Perhaps Tea”, “The Farewell Band”, “Testament of Emily”, and a poetic documentary titled “Painted Hymns: The Chapels of Santa Monica”, which will be screened in Goa on Sunday, July 31 at 4.00 p.m.

Marooned (An Interview)
by Anju Makhija
Did the water rise very quickly?
Sahib, it floods when God is angry
especially on full moon.
I went up the red tiles,
but fell down with the bricks.
Then I was running on water for miles.
Floating, you mean, like a piece of wood?
Running no, floating on water,
not far from the temple, I stood.
Father, mother, sister had trouble,
they fell from the roof, the bricks
dropping on their heads, one by one.
Buried alive! And now you are alone?
My friends Sajjan, Amjad are alive.
We live with grandmother.
Army jeeps came with clothes, food,
medicines, a ready home.
Now everyone is smiling.
All for free! Lucky guys, aren’t you?
I shot a long arrow in the sky
to stop the rain from falling.
God’s well had a big hole:
more and more water fell
taking away cows, goats, rice sacks.
If there’s another flood, what will you do?
Army people taught us to run,
no. float with wood and tyre tubes.
We know how to fight the floods,
to keep alive our mothers and fathers.
Phew, what an interview!
The rays are ripping my body,
I would love a cold beer, or
I could run with the water.
What a joke! The dam engineers
19
flushed the kids from their homes,
letting the water gush
in a sudden, devastating spout.
Damn it! Will Bombay editors
understand this insanity?
No. I’ll bury facts, report half-truths,
make-believe it was a natural calamity

‘SUMMER SHOWER’
By EMILY DICKINSON
A Drop fell on the Apple Tree –
Another – on the Roof –
A Half a Dozen kissed the Eaves –
And made the Gables laugh –
A few went out to help the Brook,
That went to help the Sea –
Myself Conjectured were they Pearls –
What Necklaces could be –
The Dust replaced, in Hoisted Roads –
The Birds jocoser sung –
The Sunshine threw his Hat away –
The Bushes – spangles hung –
The Breezes brought dejected Lutes –
And bathed them in the Glee –
The Orient put out a single Flag,
And signed the Fete away –

ACQUAINTED WITH THE NIGHT’

By ROBERT FROST
I have been one acquainted with the night.
I have walked out in rain – and back in rain.
I have outwalked the furthest city light.
I have looked down the saddest city lane.
I have passed by the watchman on his beat
And dropped my eyes, unwilling to explain.
I have stood still and stopped the sound of feet
When far away an interrupted cry
Came over houses from another street,
But not to call me back or say good-bye;
And further still at an unearthly height,
One luminary clock against the sky
Proclaimed the time was neither wrong nor right.
I have been one acquainted with the night.