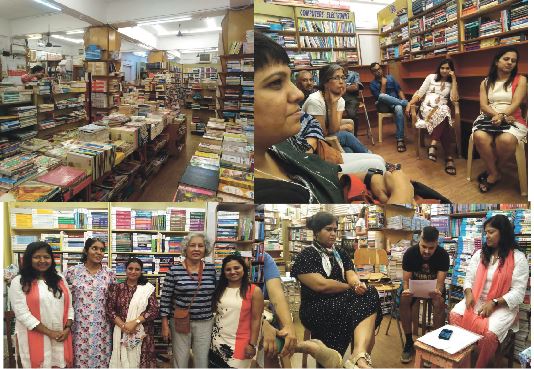 BROADWAY BOOK CENTE BOOK CLUB MEMBERS…meet at least once a month or more often to read and discuss a classic or a contemporary novel, such book club are growing in Goa to encourage the younger generation to get back to reading the timeless books of world literature. (Inset) National Geographic magazine offer poster up on the way up the stairs to the bookshop…a steal of an offer for this much celebrated nature magazine. The Broadway Book Center Reading Club is initiated by ardent book readers Archana Nagvekar and Aaron Rodrigues.

CLEARLY, all is not well in our social media-obsessed world. I am finally beginning to feel that many of us are going back to reading good old-fashioned books and people are not only writing but reading to clear the cobwebs haunting the mind (or so to speak). At one time when I was into spending my precious money on buying books and especially cookbooks (stuffing up my own private library, never mind that these days in the last of life for which the first was made I can barely dust out and look after my books!), I used drop in at bookstores frequently.
In capital city Panaji there is always my old favourite – Khalil Ahmed’s Broadway Book Center which has changed premises over the years, but mercifully found a stable home on sprawling first floor premises near the Caculo Circle (where 18 June Road begins). As far as I am concerned it’s always a pleasure to visit Broadway and while away time looking for a find tucked away amongst the shelves and piles of books floor to ceiling – and I am usually rewarded and Khalil sahib is there he will smile at my request for a discount and grant it. I think I have grown up asking for discounts on books!
Last visit to Broadway a week or two ago I was refreshed to find that their Broadway Book Club has come alive anew and is back to reading and discussing some of the most pertinent books of our times. The club fizzled out long ago but come back since the last two years and even during the two covid years the book lovers met at least once a week or twice a month. Archana Nagvekar and Aaron Rodrigues are the moving spirits behind the reading club at Broadway Book Center.
I was charmed to attend one the meeting wherein they discussed the famous Japanese author Haruki Murakami’s book “Norwegian Wood” – against a background of highly educated and urbanized Japanese society, there is clearly a clash of Japan’s feudal values vis-à-vis Western education’s liberal values, over-liberal values perhaps. Japanese society tries to be a happy society but it is far from happy I imagine because we see again and again in life that affording the good life does not necessarily bring a certain light happiness in its wake…or something like that. Japan sees a lot of young suicides and this is reflected in Japanese literature.
Do read Murakami’s “Norwegian Wood” (1987) and other classics like “Men Without Women,” “The Wind-Up Bird Chronicle,” “What I Talk about when I Talk about Running,” “Blind Willow,” “Sleeping woman,” “Kafka on the Shore,” “First Person Singular”, “After Dark”and more, from the sound of it here is an evocative and poignant writer concerned about what’s happened and is happening to Japanese society.
Haruki Murakami is a major writer whose books have been translated widely, so I wonder why some of these contemporary classics from Japan are not picked up for study in literature classes in Indian universities, or are they? I should think we have more in common with the countries of the East than the West, or area we too going the Japanese way in time to come?!
Alas, I must confess I haven’t read a single Murakami but will make up for it now at life’s end after Archana Nagvekar and Aaron Rodrigues intensive book presentation at the Broadway Book Center on Saturday, July 9, 2022! Thank you for the lively discussion Payal Agrawal, Anjee Bhatia, Aditi Kotnis, Joanita Lobo, Mohit Hastwala, Charles Dias, Devika Mangaldas, Gayle Z Noronha and others. I hear that there is a Literati Book Club out at Candolim too which has readings for book lovers and there’s one in Margao which announced itself very recently.
World Book Day is in April and the following books are choice picks: “Olga Dies Dreaming” by Xochiti Gonzalez, “30 Things I Love About Myself” by Radhika Sanghani , “The School for Good Mothers” by Jessamine Chan, “Notes on an Execution” by Danya Kukafka, “Anthem” by Noah Hawley and more. For many of the older generation books were kind of anchors in life and shaped both their conscience and philosophy of life to live by…I don’t think social media can ever be that! It makes sense to return to books, films, friends, three things we take so cursorily nowadays as I study the younger generation going for a toss here, there and elsewhere.