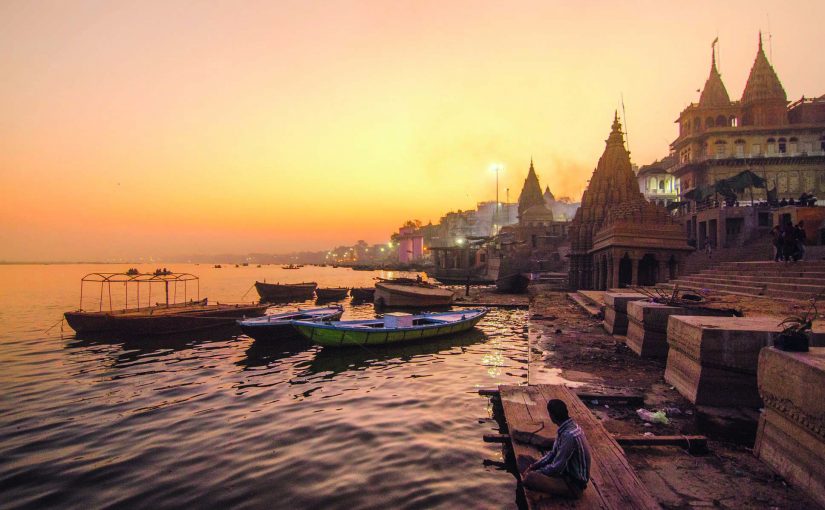 The holy city of Banaras is only revered by a section of the north Indian states. Banaras is actually a shamshan ghat place, Hindus believe that it should be their final resting place if they want to earn good karma in their next life or salvation!

India has always been a very diverse region with a wide range of communities, cultures, traditions and practises to do with the blood-thirsty Kali in Kolkata to the Shanta Durga in Goa. From the chaos of Banaras to the devotion at Balaji temple in Andhra Pradesh. Goa is a Union state with its own unique culture and can it ever be a part of the perceived akhand Hindutva Bharat?

There is emotion in the Akhand Bharat slogan, or in a map showing the vivisection of Mother India. Such a map can excite some super-patriots, frighten other Indians, and evoke nostalgia.
Analyse the nostalgia, however, and you quickly find that what is sought to be recovered is the Akhand Bharat first created by the Mughals and later consolidated by the British. For it is only the Hindostan of the Mughals, or the prized ‘Ind’ of the British, to which Akhand Bharat approximates.
India is ancient, Indian civilisation is ancient. No honest mind can dispute that. The Chinese, the Egyptians, the Iraqis, the Mexicans, and others too may tell themselves similar things, but that does not cancel Indian satisfaction.
It seems, moreover, that centuries before Babur arrived in 1526 and dislodged the Lodhis, Indian minds harboured the sense of a common land, an entity the future would call India, Bharat, Hind, Hindustan, or whatever.
Pilgrims journeyed to sacred places in the extremities of this land, all of which seemed to possess, in the eyes of these pilgrims, similar elements, whether physical, climatic, or cultural.
Not long before the start of the Common Era, Greeks marched into this space. Later, in the first millennium of this era, a string of venturesome Chinese Buddhists surmounted physical obstacles in order to see the land of the Buddha. Both kinds of visitors, Greek and Chinese, left behind information about our ancestors we might otherwise have lost. Both felt they were observing portions of a country, although neither gave a consistent name to it.
A country or a land is different from a kingdom or a state. In India’s long history, the reality of widespread, shared, or dominant cultural traits was only occasionally matched by political unity. Among the major Indian rulers of the last 2,500 years, it would seem that only Ashoka, the Mughals, and the British presided over anything resembling an Akhand Bharat.
Those three spells, when all of India had a common ruler, supply rare pages to the thick volume of Indian history. In most other periods, unity did not extend beyond a limited and usually small segment of India, which was often in conflict with adjoining segments.
During the fourth, fifth, and sixth centuries CE, diverse Gupta dynasties indeed ruled over substantial territories in different parts of northern and eastern India. Literature, art, sculpture, astronomy, and mathematics flowered magnificently during that epoch. Yet nothing even remotely like Akhand Bharat was achieved by these notable Gupta dynasties, which exited the Indian scene a full thousand years before Babur’s arrival.
The Akhand Bharat champions will never tell us which undivided India they want restored. It cannot be Ashoka’s. He is too nonviolent, Buddhist, and inclusive for them.

Let them not acknowledge it openly, but they should have the honesty to admit at least to themselves that what they wish to recreate, under a Hindu crown, is either the Indian empire under Akbar or Aurangzeb, or the more recent empire, remotely controlled from London, that Winston Churchill tried so hard to retain. Unfortunately, nothing else since Ashoka was Akhand Bharat.
Here we may mark that Ashoka and the Master he honoured, the Buddha, were for long excluded from the Indian pantheon, and viewed as aberrations from the mainstream, until the world’s recognition of their greatness precipitated Indian eagerness to own them. The widespread rejection of Buddhism and of its sister faith, Jainism, and the frequent persecution of Jains and Buddhists are components of Indian history as real as the bonds to India of Mahavir and the Buddha.
Given India’s history, is it not remarkable that the most popular, as also the most recognisable, emblems of the Indian state should be Ashoka’s Lion Capital, Delhi’s Red Fort (erected by Shah Jahan), Delhi’s British-built Raisina Hill edifices, namely Rashtrapati Bhavan, North Block, South Block, and Parliament, and Mumbai’s Gateway of India, also a British construct?
Attempts may well be made to promote alternative emblems – maybe the Patel statue (it is after all the world’s tallest), or the Ram Mandir under construction in Ayodhya, or another structure still to come up. However, a symbol rings true when a people ratify it over time, not when it is launched before cameras with fireworks.
If, after Ashoka, only the Mughals and the British created an Akhand Bharat, it does not follow that the subcontinent will never again be reunified. Who can rule out a political tsunami or earthquake in the decades to come? However, not even Mother India’s most devout worshippers expect that the India that existed on 14 August, 1947, can be restored in the foreseeable future. Later I will point out that a reunified India is in fact the last thing that Hindu nationalists want.
No one really wants reunification. And yet seventy-five years ago so many cried when Partition happened. Sadness and shame joined the trauma. When, on 14 June, 1947, the All India Congress Committee ratified the acceptance by the Congress Working Committee of Mountbatten’s Partition Plan, it did so, as one delegate would record, in complete silence.
Until that moment, every resolution adopted by the AICC in its long and active history had elicited at least some applause, unless it was one of condolence. Something had died when Partition was accepted. After seventy-five years, the regret remains. And it is frequently expressed. For instance, when, on 12 December, 2021, the government commemorated India’s victory over Pakistan in the 1971 war and the liberation of Bangladesh, Defence Minister Rajnath Singh said that the 1947 division was an ‘aitihasik galti’, a ‘historic mistake’.

When, in June 1947, the AICC silently endorsed Partition, most of that year’s killings were still in the womb of the future. The sadness that day was about a dream that had died. Most of those who quietly raised their hands in acceptance of the Mountbatten Plan had fondly nursed the map of India they had grown up with. Many had also fought the two-nation theory with passion. To them Partition was
a defeat as well as a loss.
The shrinkage of India’s area was a blow, but perhaps most troubling was the realisation that Hindus and Sikhs in the new nation of Pakistan, and Muslims in what remained of old India, would be exposed to hostility.
Moreover, comrades with whom they had gone to prison for freedom would become ‘foreigners’ from one day to the next. In one corner of his mind, Jawaharlal Nehru thought that Partition would be temporary. He was hardly the only one to think that. The links between, for example, Bombay and Karachi, or Calcutta and Dhaka, or Lahore and Amritsar seemed given by nature and more permanent than life itself. Surely nature, habit, and commerce would bring things back to normal?
Still, knowing (as he well did, from his awareness of the past) the fragility of unity in India’s long story, the Nehru of June 1947 should not have been shocked by the Partition to which he had reconciled himself just two months earlier, in March 1947. He and others knew, for example, that the Great Revolt of 1857, which in 1947 was not exactly an ancient story, had failed because the major Indian princes, including those of Baroda, Gwalior, Hyderabad, Mysore, and Kashmir, refused to lend even indirect support to the Revolt’s leaders.
They also knew that eighteen years before the Great Revolt, murders for succession were triggered in Lahore when Maharaja Ranjit Singh, who had prevented the British from encroaching on his remarkable kingdom, died. In 1849, only ten years after Ranjit Singh’s death, the Brits annexed
Punjab, with the assistance of influential members of the court in Lahore.
Not much earlier, British contemporaries of Mysore’s Tipu Sultan were calling him an imperial foe only slightly less menacing than Napoleon. However, in 1799, i.e. exactly four decades before Ranjit Singh’s death, the Marathas, the nizam of Hyderabad, and the maharaja of Travancore—Mysore’s closest Indian neighbours—sided with the British and actively aided Tipu’s fall.
Given this history, the unity that grew across virtually all of India in the 1900s, 1910s, 1920s, and 1930s seems a miracle.
True, undoing foreign rule was a unifying wish that almost every Indian shared. Moreover, despite its oppressiveness, foreign rule and its accompaniments (trains, newspapers, universities, all-India civil services, the army, and the like) had enabled Indians of different religions, regions, castes, and languages to get to know one another as never before.
These were two huge advantages for India’s national freedom movement. Even so, posterity’s salute must be offered to both the magnitude and the quality of what Indians fighting for freedom achieved between 1900 and 1947.
These forebears of twenty-first-century Indians seemed to work not only for national freedom but also for individual freedom and for communal unity; for azadi but also for insaf; for swaraj but also for social justice.
Not foreign rule alone but Indian wrongs too were confronted by them. Much was unaccomplished, much not even attempted, but what was aimed at and achieved forms a proud part of our world’s
common history. Why, then, did Partition happen in 1947? Why did carnage accompany it?