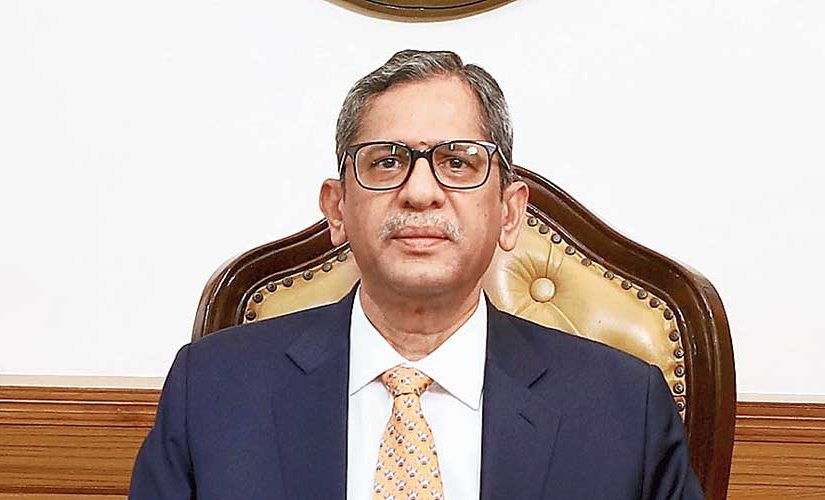 THE 48th Chief Justice of India (CJI) NV Ramana plunged headlong into boiling hot water only a day after he retired for allegedly setting up an International Arbitration and Mediation Centre (IAMC) at Hyderabad in Andhra Pradesh managed by a trust which he himself set up, according to 65 lawyers. Proving that CJIs, like Caesar’s wife, must pause before taking up a cause, to prove they did not bend the laws.
And like his successor, the 49th CJI, Uday Umesh Lalit, who was an Advocate-on-Record in the Supreme Court before becoming a senior advocate in the Supreme Court, he knows the Registry of the apex court quite often, lists the petitions filed by top-notch law firms in Delhi with stakes running into hundreds of crores or rupees, within six weeks, while those of relatively unknown lawyers take six months.
CJI Lalit is only the second CJI to be directly elevated as a Supreme Court judge from the bar. The first was SM Sikri. Like Sikri, Justice Lalit probably oversaw the tough advocate-on-record examination for those lawyers who want to practice exclusively in the Supreme Court.
This is not the first controversy which the outgoing CJI got into. The Andhra Chief Minister YS Jagan Mohan Reddy (YSR) feted CJI Ramana in 2021, after first complaining about him to CJI Sharad Bobde, alleging the judge was ensuring all petitions filed against his (YSR) government were transferred to handpicked benches in the Andhra Pradesh high court with predictable results. He had alleged in 2020 Justice Ramana was a confidante of N Chandrababu Naidu. But now, Reddy made a volte face.

BAIL FOR VIP CHILDREN!
TO his credit, CJI Ramana headed the bench which cancelled the bail granted to Ashish Teni, son of Union minister Ajay Teni. Ashish Teni was accused of killing four protesting farmers and a journalist when his convoy ran over them. The Lucknow bench of the Allahabad high court promptly granted bail to the minister’s son which the Supreme Court cancelled.
The CJI Ramana-led collegium cleared 224 lawyers for elevation as high court judges, and elevated 11 judges to the Supreme Court, of which three were women. Out of 1,108 high court judges sanctioned for 25 high courts, there are only 380 vacancies today, thanks to the outgoing CJI.
Nevertheless, he miserably failed to force the government to confirm or deny it used the Pegasus spyware on its own citizens. “The government is not cooperating,” declared CJI Ramana after reading the report of the three-member technical committee supervised by a “legendary” judge like RV Raveendran.
The New York Times reported in January 2022 the Modi government had bought Pegasus from Israel as part of a $2 billion weapons deal inked during Prime Minister Narendra Modi’s hyped-up visit to Israel in 2017. West Bengal Chief Minister Mamata Banerjee alleged Israel’s NSO group wanted to sell Pegasus to her government, but she refused the offer, although she alleged that the Chandrababu Naidu government used it in Andhra Pradesh.
A journalist like Siddique Kappan is still languishing in jail after allegedly being chained to a bed, according to media reports. The Supreme Court did little to help him although CJI Ramana started his career as a reporter with the Eenadu group.
The dismissal of an appeal challenging the denial of sanction to prosecute UP Chief Minister Yogi Adityanath in the 2007 Gorakhpur riots case again shows CJI Ramana in a poor light, as it appears the judiciary does not want to challenge the government. Laypersons do not know the government allows the judiciary to do justice in 96 per cent of the cases in which the government has no stake.

JUDICIARY’S INDEPENDENCE
BUT the verdicts delivered in the remaining four per cent cases proves (or disproves) how independent the judiciary really is. These four per cent cases are the Ayodhya case, the Rafale deal, the Pegasus case and the abrogation of Article 370 in Jammu and Kashmir. Successive CJIs from the 45th CJI Dipak Misra to the 48th CJI NV Ramana have not defied the government.
The 47th CJI Sharad Bobde gave a clean chit to his predecessor, Ranjan Gogoi who was accused of misbehaving with a woman staffer. Bobde advised the 25 high courts not to question the government on its tackling of the Covid-19 pandemic because it had the funds and the expertise. Despite the several lakh infected corpses being cast into funeral pyres and millions of migrants forced to walk long distances. CJI Ramana chose not to embarrass the government on Pegasus.
The technical committee on Pegasus set up by the CJI-Ramana-led bench was an extension of the court itself because it had to evaluate disputed questions of fact and then submit its report. The government was clearly committing contempt of court by refusing to confirm or deny it used Pegasus. Ipso facto, the committee’s conclusions that there was no evidence of Pegasus being used in the 29 mobile phones examined are questionable. And CJI NV Ramana has chosen to ask no more questions.

IN A DEMOCRACY
IN our democracy, the people have a right to know if the government is listening to their phone calls, which is why reports should not be handed over in sealed covers to the Supreme Court judges — unless the entire proceedings are held in camera.
Another question which has gone unanswered is why CJI Ramana kicked the petitions challenging the abrogation of Article 370 in Jammu and Kashmir into the deep grass, according to Farooq Abdullah. The answer is simply because these are too sensitive to decide.
If the abrogation of Article 370 is upheld, it will imply the Supreme Court is an adjunct of the government. Conversely, if it strikes down the abrogation of Article 370, it will create upheaval in the country. The solution is to allow these petitions to languish in the registry until they lose their potency and can be quietly disposed of without too much of a ruckus.
Divine justice is better than man-made justice which goes by man-made laws and the quirks of the CJIs who dare not challenge the government.

(Dr Olav Albuquerque holds the MSc, LLM and a PhD in law. He is a senior journalist-cum-advocate of the Bombay high court.)