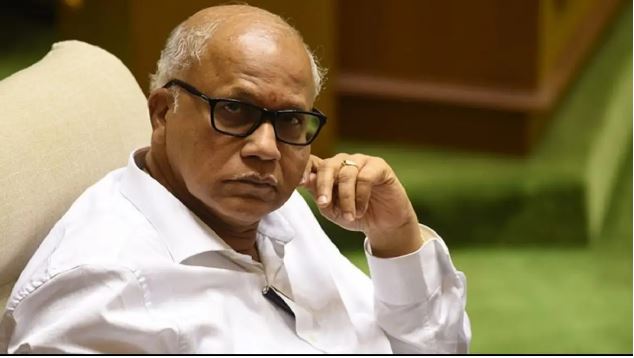 RETURNS HOME: Digambar Kamat, who had remained loyal to the Congress although the party got only 11 seats in the last assembly election, has decided that there is no future in the Congress.

In a long expected development eight of the 11 members of the Congress Legislative party which represents 2/3rd of its total membership, joined the BJP on September 14, 2022. Clearly, the BJP was only waiting for Digambar Kamat to make him mind to join the party.

DIGAMBAR Kamat is likely to replace Pramod Sawant as the chief minister of Goa. This follows the decision of Digambar Kamat along with eight other Congress MLAs who have been welcomed into the BJP fold. It’s the magical number to avoid disqualification at eight. The legislative assembly rules specify that if 1/3rd of the members of the legislative party break away and join another party, it will be consider a split and not an act of defection.
There has been discussion on the revolt within the Congress party for quite some time now. Prime Minister Narendra Modi and Home Minister Amit Shah have been particularly keen on Digambar Kamat returning to the BJP. In today’s short memories perhaps it is not widely remembered that Digambar is an old BJP karyakarta, who was a member of the late Manohar Parrikar’s cabinet till he defected to the Congress in 2007. Ironically, Digambar was considered the most trusted and loyal member of the Parrikar cabinet. Indeed, Manohar Parrikar had sent Digambar along with other party MLAs to Gujarat and Rajasthan to ensure that there was no poaching by the Congress. Shockingly for Manohar Parrikar it was his trusted shepherd, supposed to look after the flock and ensure the loyalty of other BJP MLAs, who switched to the Congress. For once Manohar Parrikar was shocked beyond words at this betrayal.
Digambar had returned secretly from Gujarat, abandoning the other BJP MLAs. Apparently, he was in contact with Magaret Alva, the AICC general secretary of the Congress at that time. Even at the last moment Parrikar paid a surprise visit to the residence of Digambar Kamat to persuade him to stay back in the BJP. But Digambar refused and soon after Parrikar left, a long convoy including mastermind industrialist Audhut Timblo, social activist Datta Naik and Digambar Kamat himself, went to the Ramada hotel down south Goa where Magaret Alva and Churchill Alemao were waiting to welcome them.
This time we understand that Digambar was not very keen on joining the BJP. But the problem was that he did not see any future at a headless Congress party. The Congress party has not held elections for the post of party president for more than a decade. The party continues to function under Rahul Gandhi as vice-president. This is not acceptable to the majority of senior Congress leaders.
It may be recalled that a group of 22 senior Congress leaders, including Kapil Sibal and Gulam Nabi Azad, kept insisting that one of the party workers should be made president instead of Rahul Gandhi. Even master political strategist Prashant Kishor, who was associated with the Congress for some time, broke away because Sonia refused to make Priyanka the Congress president instead of Rahul.
Rahul is not taken seriously. It may be recalled that he was defeated by BJP and Silly Soul’s Smriti Irani in the last general election to the Lok Sabha. Rahul has got the habit of suddenly disappearing on holidays for Vipassana meditation in Burma or Thailand. He is reputed to have a girlfriend in Columbia whom he visits frequently. Rahul takes interest in everything else excepting the affairs of the Congress party.
Unlike the other Congress leaders from Jawaharlal Nehru to Indira Gandhi to Rajiv Gandhi to Sonia Gandhi, Rahul Gandhi makes no attempt to try to identify with the poor. In sharp contrast to the garibi hatao slogan which swept Indira Gandhi to power, the comment is that Rahul is more interested in hataoing the garib. In the ongoing Bharat Jodo rally the focus has been on his expensive outfits like his British Burberry Rs41,000 T-shirt, his Nike shoes and his cool shades.
Digambar’s decision to shift to the BJP is a sign of frustration within Congress party circles. Nobody sees a future in the Congress. They do not see the Congress being part of the gathbandhan against the part of the BJP, let alone lead the gathbandhan. Sonia has rejected Nitish Kumar or Sharad Pawar as leaders of the gathbhandan against the BJP.
It is obvious that Digambar must have been promised the chief ministership. Many people are very unhappy with Pramod Sawant and want a senior leader to lead the State. Digambar also has the advantage of being quite close to the RSS high commands in Nagpur. It is Mohan Bhagwat who has persuaded Digambar to join the BJP with the promise of the chief minister’s post. The central BJP leadership is not in favor of Vishwajit Rane or Mauvin Godinho for the post of chief minister of Goa.