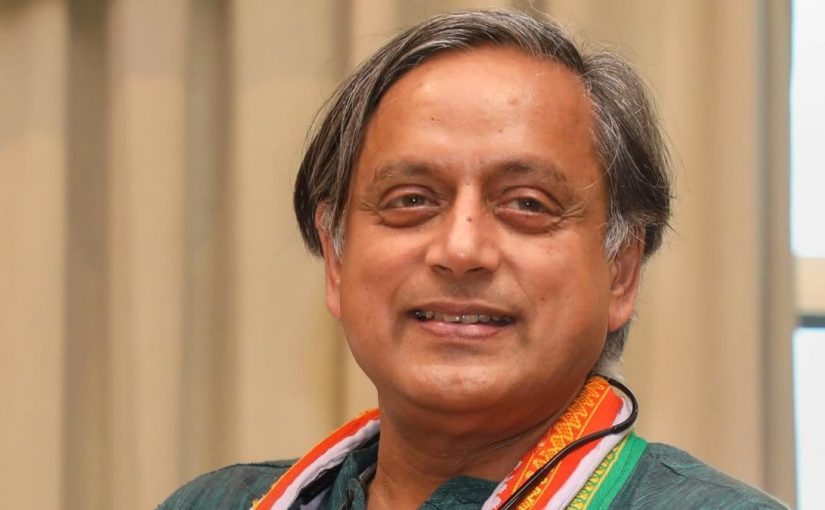 BLESSING: It is learnt that Sonia Gandhi has approved and blessed Shashi Tharoor, who is contesting for the post of Congress president in the party election underway

independent candidate
Many senior Congress leaders including electoral expert Prashant Kishor believe that if Sonias insist on a member of her family becoming the president, then Priyanka Vadra Gandhi would be a better choice. Prashant Kishor, who briefly joined the Congress as a consultant, made it very clear that the party has no future under Rahul Gandhi. Rahul Gandhi has been behaving in an extremely irresponsible manner. On the eve of an election Rahul Gandhi disappeared for Vipassana meditation either in Burma or Thailand.
Rahul Gandhi is also reported to have a Columbian girlfriend with whom he frequently goes off for a holiday break. It is clear to not just the Congress party but other members of the ganthbhandan that Rahul Gandhi will not be accepted by all Opposition leaders who want to take on Narendra Modi. It is therefore a precedent for Sonia Gandhi to have reportedly agreed to support Shashi Tharoor for the post of the president of the Congress party in the party’s election scheduled for October 17, 2022.
Shashi Tharoor as an Indian Foreign Service officer before he quit to join politics. He is considered to be very close to Rahul Gandhi. Indeed, Shashi has lived a very colorful life and was allegedly accused of the murder of his wife Sunanda Pushkar, found dead in at the Leela Hotel in Delhi. However, he was acquitted and continues to be among the most popular and sophisticated of the senior Congress leaders.
Whether he become president will depend on Sonia and her supporters. In any case, unlike Manmohan Singh and the late Narasimha Rao, Tharoor is unlikely to be a rubber stamp as Congress president, that is if he makes it as president.

DISMAL UNEMPLOYMENT
AND a few stray thoughts on a bit of alarming news released recently, like the rate of unemployment at 13% in Goa is the highest in the country. This is surprising considering that at least the migrants flocking to Goa have no problems getting a job. If a migrant family of husband and wife seek a job, the husband will probably get a job as a shop by or as a watchman.
Actually, there is greater demand for the wife for domestic work in homes. There is a desperate shortage in this area with many Goans seeking a house maid to do domestic chores. I suspect that the figure provided by the government of India is based on figures registered with the Government Employment Exchange.
The primary problem is that Goans will wash the floors and washrooms of Heathrow airport in London and do any menial job there. But they will not do menial jobs in their home state of Goa. Moreover, particularly members of the Catholic community, have started migrating abroad again in large numbers. The largest number of Goan migrants are settled in the UK and Europe.
Part of the problem is the education system. The majority of Goan candidates who apply for Goa Public Service Commission jobs do not qualify because they are weak in maths and language skills. Even worse, when it comes to government jobs, you cannot get a government job unless you have enough money to pay the bribe demanded by a minister in power or his agents.
However, there is some good news for Goans. The National Banking Commission has been insisting that recruitment to banking jobs should be done on a regional basis. It has been pointed out that it makes no sense if a bank employee is not familiar with the local language. This would certainly improve the chances for Goans looking for banking jobs.
Another injustice done to Goans is that all recruitment to post offices is done by the Kohlapur-Maharashtra based office. This is why most postmen are not familiar with local language or even know the address of different locations where they are required to deliver mail. In fact, in the case of every Central government organization, be it the petroleum pumps or Goa shipyards or the Mormagoa Port Trust, Goans must be given a preference in recruitment.
Above all this system of nepotism has to be broken. Soon after Liberation a lot of junior engineer from Karnataka and Kerala rushed to Goa because Goa had no qualified candidates. Indeed, there is shortage of nurses and many of them are from Kerala. The jobs get transferred from generation to generation. Over the years I have seen an increasingly large number of nurses in the Goa Medical College.
Absurdly enough even in the case of junior engineers the State government has been forced to bend the rules, so that they may be promoted to the level of executive engineers. Fortunately, promotion stops at the level of chief engineer because for this you need a degree in the subject and at least 10 years of experience to be promoted as engineer.

BABUSH CONSOLIDATION
AND a few stray thoughts on the run up to the 2024 parliamentary elections and how Babush Monserrate is trying to consolidate his old and new migrant vote banks. It began with getting the votes of migrant Muslims. There were a lot of migrant Muslims in the wake of Liberation who were involved in the construction business.
Babush nurtured his Muslim voters very carefully. He took care of the education of the children of the community. Recently, he even set up his own school so that he could admit students without making their parents go through any government formalities.
After the Muslim migrants Babush concentrated on the Oriya migrants. A large number of Oriya migrants have been coming to Goa to work in the fishing industry and as watchmen for gated colonies which keep on increasing. The traditional job of watchmen done by the Nepali migrants have now have been taken over by the Oriya migrants.
Babush has discovered two new mega vote banks. The first of these are the UP bhaiya from Bihar. But this latest achievement is to bring together all the people from the North-East and Nepal. Recently, we saw a mega get-together entertainment party for the Nepali community in Goa which may be adding up a lakh now, with most concentrated in Taleigao, Panaji, Mapusa.
With all this clever nurturing of his vote banks, Babush Monserrate does not have to worry about whether he is given a ticket by the BJP or the Congress or any other party. Politicians like Babush Monserrate, Michael Lobo Mauvin Godinho and Digambar Kamat have nurtured such huge vote banks for themselves that it does not matter to them whether God approves or disapproves of political defections.

CYRUS MISTRY LESSONS
AND a last stray thought for besides the fact that when Cyrus Mistry’s driver was driving above the stipulated speed and breaking highway traffic laws, apparently when the accident took place, the safety airbags of the seats behind in their Mercedes did not operate or were defective and did not open out to save life in case of accident.
It would appear that Cyrus Mistry was not a very responsible person or even a responsible passenger. The police in its formal report noted that the car was over speeding at 100 kilometers per hour plus, plus in an area where the speed limit was marked at 45 KPH. The driver is also accused of breaking traffic rules and shifting without any notice from left lane to right lane to overtake a vehicle on the left.
Perhaps after all it is not surprising that Ratan Tata refused to renew Cyrus Mistry’s contract as chairman of Tata Sons. Any executive, who cannot even look after his car and its maintenance, and allow any friend to drive it, cannot be expected to look after a huge company like the Tata Group.