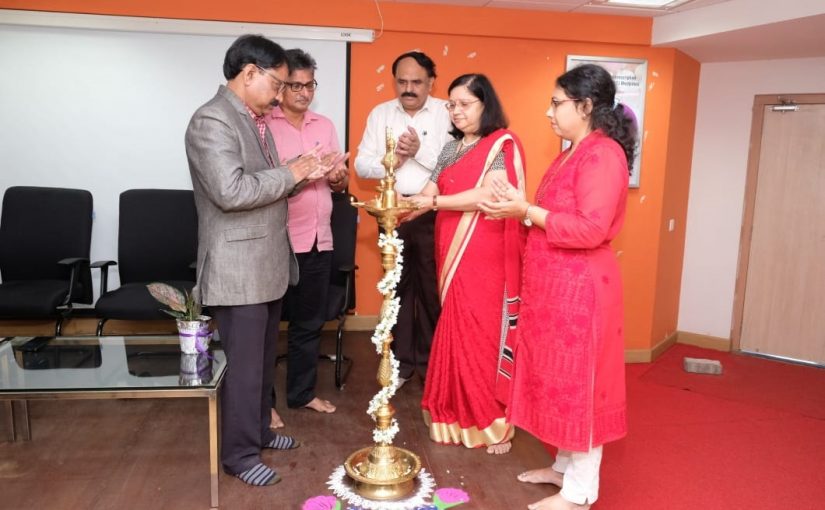 IT WAS WORLD PHARMACIST DAY ON SEPTEMBER 25: The Directorate of Food & Drugs Administration (FDA), Bambolim-Goa, in association with the Goa State Price Monitoring and Resource Unit, celebrated this annual day at the DFDA conference hall, with this year’s theme being “Pharmacy united in action for a healthier world.” Leaflets of  Goa PMRU and Pradhan Mantri Bhartiya Janaushadhi Pariyojana were released on the occasion and pharmacists who performed yeomen service in handling 24×7 helpline commissioned by FDA for providing guidance regarding essential medicines during Covid 19 Pandemic crisis, were felicitated. A quiz competition on the topic “Availability, Affordability and Accessibility of Essential Medicines”’ was conducted among various participants from the pharma industry, Chemist & Druggist Association, Pharmacy College and Goa Medical College and Hospital. The first prize went to the Chemist & Druggist Association’s team, second prize to  Goa College of Pharmacy and third prize to Sun Pharma. September is also observed as the Rashtriya Poshan Mah and this was also celebrated. Assistant professor in food and nutrition Varsha Naik from the Goa College of Home Science gave a lecture on food and nutrition, while Sarita Bhonsle (project coordinator) along with Dimple Kerekar of The Goa State Price Monitoring & Resource Unit” compered the function. Shweta Dessai proposed the vote of thanks. Picture shows Jyoti Sardesai (director, DFDA), Dr G. K. Rao-Principal, Goa College of Pharmacy, Dr Praveen Khullar (president, Goa Pharmaceutical Manufacturers Association and Prasad Tamba (secretary, Chemist & Druggist Association), Shweta Dessai (deputy director, DFDA).

OF MOBILES AND TOWERS

IN a recent interview with a local newspaper the director of Tata Hospital concluded that  mobile handsets are more dangerous when held directly near the head. If there is any truth in this the government must immediately rule that people use mobiles only with speakers.

Strange, the good doctor spoke nothing about SAR and EMF values which are the key. In 2017, the DoE had reduced the strength of mobile towers to 1/10: why? Mobile sets to 1.6W/Kg which one can see by dialling: *#07#. Mobile towers when erected are for a few antennas to get the desired standard. Overtime, these are increased.

Citizens can demand the testing of the same where there is a fine of Rs5 lakh if strengths are increased. DoE, in its facts vs myths, says the proximity of the tower is not dangerous at floor level but the antenna is: this comes up when there are buildings. Further, when there is a tower, you cannot build a building as the second floor will come in line with the antenna.

My question is the interviewer questioned the TATA doctor very haphazardly and ignorantly! Is this a paid interview to prevent protests?

THE public and especially senior citizen women are finding entry into this  SBI  ATM (near Secretariat) to do their money transaction. Here the trench by the contractor to lay pipelines has not provided a proper and safe wooden plank for customers to access their ATM. (See photo here of seniors trying to jump into the ATM)

EX-CHIEF MINISTER/former  Minister/former Congressman and current Rajya Sabha Trinamool Congress MP Luizinho Faleiro, after slowly finding the going getting tough in the TMC, and with all his known political rivals from his former party already in the BJP — is now planning (although he is denying it) to re-join the Congress! This power-hungry politician had desperately joined the TMC just before the last assembly elections, after quitting the Congress party with a lot of hype, dreaming of being chief minister once again after the TMC came to power with a full majority!

Unfortunately, the Faleiro-led TMC was badly routed despite the hallabaloo/hangamaa and was not even able to win a single seat, completely shattering all his dreams of being CM of Goa. The central leaders/so-called “observers” of the Congress party like Gundu Rao, P Chidambaram, etc, have any shame welcoming this former backstabber “bhaizonn”…oops Luizinho Faleiro, into the Congress to boss over its last three loyal elected MLAs, namely Adv Carlos Alvares Ferreira, Yuri Alemao and Altone D’Costa?

Further destroy the prospects of the grand old party in Goa? Yes, an outdated rejected/ nuisance creating grand-old papa like Luizinho Faleiro needs to be shown that it is time for him to retire from active politics. May better sense prevail.

MASSACRE OF TREES!
ON August 22 the Expert Appraisal Committee of the Union Environment Ministry gave the green signal to fell 8.5 lakh trees in the Great Nicobar Island (GNI). The carnage of tree will occur in an area of 12 to 20 hectares which is made up of mangroves and corals. This mass butchering of trees will be carried out so that there may be a military-civil dual use airport, international container trans-shipment terminal, a gas-diesel-solar-based power plant and a township. The project will affect 1,761 people including the indigenous Shompen and Nicobarese communities.

The GNI is the southernmost part of India’s territory and is geo-strategically located with access to South and Southeast Asia. But this does not mean that we have a right to massacre the island’s stabilizing green cover and habitat for “development.” On one hand the government encourages use of renewal energy, green technology, strict environmental measures, ban on plastics, etc, and on the other hand, it plans projects which are detrimental in  terms of flora, fauna and anthropologically the pristine environment of the GNI and its vicinity.

Where are the tree lovers, environmentalists, Greenpeace activists, and others who are always at the forefront to protect this beautiful planet? Let us hope that the government does not go ahead with the project and if it does, then the project should be trimmed to the minimum requirement and save as many trees as possible. The mangroves and coral reefs must be conserved as they are the first lines of defence against nature’s fury (remember the 26/12/2004 tsunami) and also serve as a habitat of fascinating marine life. Let us not be guilty of killing the biodiversity of the GNI!